The Sunday Papers: History of a national passion prone to partisanship 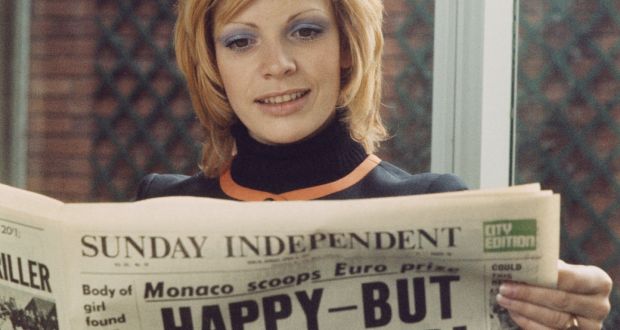 French singer Séverine reads the Sunday Independent: “The entertainment and the serious content were inextricable – chemically fused to expose the reader to views which challenged the consensus.” Photograph: Rolls Press/Popperfoto/Getty

They seem to be up there with the eternal verities, the great metaphysical mysteries, Captain Boyle and “What is the stars?”

What is the Sunday papers, Joxer?

Authors Mark O’Brien and Joe Breen are intent on demystification – though their insight that the one thing a Sunday paper most definitely is not – a weekly newspaper – is contradicted by the title.

The Sundays stand alone. They are a national passion, a guilty pleasure even. They are breakfast, dinner and tea on the day, then Joe Duffy, the dentist’s waiting room and the dinner party thereafter.

The chapters, one apiece on every title and two on the oldest – the Sunday Independent – deliver many surprises. Who knew that The Irish Times once had a Sunday paper? The Sunday Review of the late 1950s was a brash tabloid which, “though perhaps less nuanced and intelligible than the broadsheets,” according to observers, “was more morally charged, full of heroes and villains.” It didn’t last.

But did the authors consciously decide to accord coverage in inverse proportion to a paper’s circulation? The Sunday Journal’s short life as a colour agricultural tabloid is mystifyingly equated with the longevity of the Sunday Press. Both failed eventually, as did the Sunday Tribune. The Journal’s hour was brief, but was it really shining?

The authors say this is not just a history of Sunday papers but also a history of Sunday newspaper readers. In this they are right: choice of Sunday newspaper is bound up with identity. The problem about history, as all historians know, is who does the writing. Case studies and autopsies – half the Sunday titles are defunct – probably seemed a sensible solution, but does it provide the non-partisanship which the title suggests?

Religious interest was naked in the first edition of the Sunday Press in 1949, which proclaimed in bold type, 'We invoke the Most Holy Trinity to guide and direct our endeavour and our work'

While their own insights are subtle, their choice of contributors falls into the truistic trap – Sunday Tribune good, Sunday Independent bold. Thus, the Sunday Tribune chapter is written by two partisans, a long serving news editor and a frequent contributor, resulting in a loving portrait of the paper and its editor. Was the Tribune so self evidently a good thing and its readers such virtuous ethicists that it did not require objectivity?

The chapter on Sunday Independent editor Aengus Fanning gets the view from the jaundiced eye of academic Kevin Rafter and is considerably shorter than the Tribune one. While holding his nose slightly about the entertaining package that was the Sindo, Rafter concedes that there was also serious journalism, which included, notably, subjecting the peace process and Gerry Adams to fierce scrutiny. But he misses the point: the entertainment and the serious content were inextricable – chemically fused to expose the reader to views which challenged the consensus.

Nationalism, religion and sex were, we recognised, the basic ingredients of Sunday newspapers and the emphasis given to each dictated the differences between titles. And while, to judge by public discourse in recent years, it often seemed that sex was considered more transgressive than support for terrorism, it is the newspapers which confronted sex and sexuality honestly which have survived.

Sex and religion was the proud formula in the Sunday World. But like all great tabloids it enjoyed a good crusade. In 1975 Eamon McCann was attempting to breach the Chinese walls of child custody cases, declaring the court system “hypocritical about motherhood, morality and the family.” It was to take many more decades before reporting restrictions on family law cases were lifted – mainly thanks to campaigning by The Irish Times.

Religious interest was naked in the first edition of the Sunday Press in 1949, which proclaimed in bold type, “We invoke the Most Holy Trinity to guide and direct our endeavour and our work.” Whether it was divine intervention or their commitment to leave no element of mammon “sport, politics, cinema, theatre, farming, cost of living” uncovered, by 1955 it had average paid sales of over 400,000.

In being craven to the Catholic Church, the Sunday Press was simply market driven. Crozier belting of Sunday newspapers was a clerical pastime and some went to lexical apoplexy describing “the vulgar, the suggestive, the smutty, the ill, the gilded filth,” of Sunday imports. There were auto-da-fés in Limerick (quelle surprise).

But there was to be no turning back. The success by the end of the 19th century of English Sunday imports provoked William Martin Murphy (bleating about foreign competition – another time honoured ritual ) to launch the Sunday Independent in 1905. Politics were important too – he laid the Easter Rising at unionism’s feet. That newspapers had a political agenda was a given then.

“A viewspaper, not a newspaper” is how Geraldine Kennedy characterised Fanning’s Sunday Independent. Incredibly now, she meant it as a criticism.

– Anne Harris is a former editor of the Sunday Independent