Problems with girls and the Troubles with men 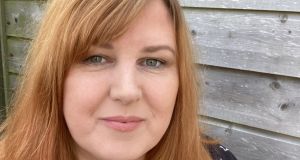 Kelly Creighton: The lack of genuine interest in how conflict has affected girls here is painful.

Another writer once told me they found violence rippling beneath some of my short stories. I was glad they’d highlighted it. Growing up in Northern Ireland during the Troubles, violence was rife. It dominated the news channels. Even if my stories aren’t overt in their portrayal of it, it makes sense to me that the threat would be there. Or the fear of it. Or the lasting damage.

Lately, my short stories have developed a more satirical voice, but that is not to say I don’t still write about violence, be it political, domestic, violence against women… Violence was one of the main themes in my debut novel, The Bones of It, just as it is evident in my DI Harriet Sloane police procedural series.

In the first book of the series, The Sleeping Season, Harriet Sloane – the middle-class protagonist – seems to have it all. Harry is flying in her career. Yes, she has to fit in with the boys’ club at the PSNI, but she is smart, quick-witted and more than capable. Behind the scenes Harry is living with the lasting effects of having been in a toxic, violent relationship.

Even though she is a detective, who knows the law especially well -– her mother was one of the first female judges in Northern Ireland -– Harry doesn’t trust the law enough to press charges against her own abuser, her ex-husband, who has been stalking her.

The Sleeping Season was published last March and is set in autumn 2016. I hoped that space in time would show “how things once were” but I’m not sure there have been many changes. While, thankfully, stalking is recognised more since I wrote The Sleeping Season, Northern Ireland is still the only region of the UK or Ireland without stalking legislation.

Harry’s backstory is another character in the series. Just like Belfast itself. Book one centred around the case of a missing four-year-old boy. Book two, Problems with Girls, sees DI Sloane over a year later, working on a new case where a young female activist has been found murdered in a political office. DI Sloane and the rest of the team in Strandtown PSNI station, East Belfast, soon join the dots and start to realise that there is someone out there who is targeting young women.

Something similar happened lately in Belfast. A man on a bicycle went around striking and stabbing young women. Unnerving and upsetting, it reminded me that, like in the book, there are individuals who target people based on their gender and age. In another recent local case, the judge branded the offender a misogynist. The first time I have ever heard the obvious recognised so pointedly.

Problems with Girls was always planned to be set in May 2018. When that time came around I wanted to reflect what was happening in our society. I knew that I was writing a book about young women being targets of violence. Timing would have it that the Belfast (rugby) rape trial happened the month before, the #ibelieveher rallies that took place shortly after were still fresh images. The result f the Repeal the 8th referendum is revealed during the course of the novel, which was also relevant to the series.

Around that time I read that young women were the most invisible demographic in Northern Ireland. I have said before how the lasting legacy for children of the Troubles, though statistics have tended to focus on how the conflict affected males, is devastating. In The Bones of It, Scott, the novel’s narrator, notes this and ponders to himself whether women weren’t affected.

The lack of genuine interest in how conflict has affected girls here is painful. Not until Anna Burns’ Milkman had I visited through literature the ways in which the Troubles had certainly affected women, in both overt and subtle detail. I have addressed some of the ways myself in Problems with Girls.

And yes, I used the word girls’ in the title, which was only in part a nod to the trend, as there have been many crime novels with girl in the title. There was a decade-long gap between James Patterson’s 1995 Kiss the Girls and Stieg Larsson’s 2005 hit The Girl with the Dragon Tattoo, another break and then we saw a sudden surge; from Gillian Flynn’s Gone Girl to Pretty Girls by Karin Slaughter, to Megan Miranda’s All the Missing Girls. And many more.

The title actually derived from watching documentaries about the Me Too movement; I kept hearing friends of alleged offenders say, “he was known to have problems with girls”. I wrote this phrase down. Of course I was aware that the title had the word girl in it, and how popular and contentious that can be, but the phrase itself is loaded. The term “Problems with Girls’ means much more than criminal misogyny.

“Girls” in crime fiction are usually women. Historically we have read about the “icy blonde” femme fatale character with the hourglass figure, or the other female character, the victim; who was usually a beautiful young dead woman.

Crime fiction once had an obsession with the dead female form. As readers, we have not always learned who the victim really was. Nowadays crime fiction has more awareness. We have feminist thrillers. It makes sense; women have a huge appetite for crime fiction.

As the DI Sloane series progresses, I want to both entertain my readers and make them think. I may cover serious subjects, as crime fiction does, but like all crime fiction set in Northern Ireland, we writers have a knack of balancing it out with bags of dark humour. It’s far from doom and gloom; crime fiction showcases resilience of character and ultimately hope. Readers enter into a contract with the author of police procedurals knowing there has to be justice, in the end. At least with fiction you can trust there will be that.

Kelly Creighton is a crime writer and short story writer living in Co Down. Problems with Girls is published by Friday Press, £9.99.