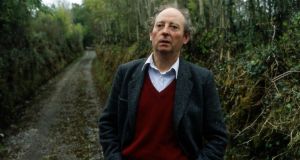 John McGahern in 1990 near his home in Leitrim. Delahaye’s careful work and the easy friendship that developed between the two men were important factors in the growing popularity of McGahern’s work in France. Photograph: Frank Miller

The death occurred on December 6th of the French poet and translator Alain Delahaye. Starting with his translation of The Dark, published as L’Obscur with Éditions de la Sphére in 1980, Delahaye, born in 1944, became John McGahern’s most extensive French translator.

He was widely experienced, also translating Patricia Highsmith, John Updike, Roald Dahl, Brian Friel and Oscar Wilde, among others, and he worked in dubbing and subtitling films such as Billy Elliot and The English Patient, and television shows such as Game of Thrones and The Tudors.

When I first got in touch with Delahaye in September 2018 as part of my search for McGahern correspondence, he replied promptly, happy to share his still warm memories of McGahern.

“Since the day I started translating The Dark,” Delahaye recalled, “he was always extremely friendly with me. My only regret is that I was unable to translate the whole of his work. And I still hope that his play The Power of Darkness will be published and staged some day in Paris or elsewhere in France.”

He could not bring himself to translate The Barracks because he found reading it such an overwhelmingly emotional experience. Work on translating The Dark led to a series of revealing questions and answers between the two men. Why, wondered Delahaye, were villagers shopping in a post office? Why was it possible to buy shoes in a clothes shop? What was the ESB?

McGahern was always happy to help: “The post office would be the only shop, keeping all sorts of goods - newspapers, tea, butter, chocolate, lemonade etc. Even if it was Sunday, people would knock on the back door… Shoes are always sold in drapers’ shops in country towns in Ireland… E.S.B. Electricity Supply Board, a semi-state body. Quiet office job.”

A friendship blossomed. Delahaye gifted John two handsome volumes of his poetry: L’Éveil des Traversées, published by Mercure de France in 1971, the same year that the company published McGahern’s Nightlines as Lignes de Fond, translated by Pierre Leyris, one of the most celebrated French translators of the 20th century; and L’Être Perdu, published by Maeght in 1977. Later came a gift of the journals of Eugène Delacroix.

These books were treasured by the McGaherns, forming part of John’s library at his death. August 1981 saw Delahaye, his wife Pascale and young daughter, staying with the McGaherns in Leitrim, Delahaye enjoying his part in helping to save the hay. McGahern would occasionally make reading suggestions to the French man, pointing him towards the excellent Canadian, Mavis Gallant, and making a gift of his beloved Philip Larkin’s Collected Poems, remarking admiringly of Larkin’s small published output and angry that “after his death they put in every bit of crap they could get their hands on”.

Subsequent to his work on The Dark, Delahaye next moved on to The Pornographer, which was published by Presses de la Renaissance in 1981 as Le Pornographe. In a letter of December 16th, 1981 Delahaye tells McGahern that the book is selling well (2,500 copies) and that Tony Cartano of Presses de la Renaissance is interested in publishing more. Delahaye favoured either the stories of Getting Through or McGahern’s 1974 novel The Leavetaking.

Cartano decided on the latter and thus began one of the more delicate writing projects of McGahern’s life: so intrigued was he by what the process revealed that he heavily rewrote much of the book’s second half. There was the usual come and go between author and translator: among other things, Delahaye was puzzled by what a “pioneer pin” represented and what the “modh múinte” was.

Delahaye also caught and changed an error from 1974 in which the narrator’s mother tries to ease her son’s fear of a thunder storm: “You won’t die and it’s moving away. You can count between the clap and the flash. It’s a mile away for every second you count.” Delahaye points out in a letter that the counting ought to take place between the lightning and the thunder – McGahern agrees and changes it for the reworked book.

The revised, shorter version of the novel was reissued by Faber in 1984, 10 years after its initial publication, with a brief, revealing preface: “Several years after its first publication, I found myself working through it again with its French translator, the poet Alain Delahaye. The more I saw of it the more sure I was that it had to be changed. The crudity I was attempting to portray, the irredeemable imprisonment of the beloved in reportage, had itself become blatant. I had been too close to the ‘Idea’, and the work lacked that distance, that inner formality or calm, that all writing, no matter what it is attempting, must possess.”

Delahaye’s careful work and the easy friendship that developed between the two men were important factors in the growing popularity of McGahern’s work in France. His books were enthusiastically reviewed across a range of French newspapers from Le Monde to Le Canard enchaîné, he appeared on France 2’s arts show Le Cercle de minuit and was honoured with the Prix Etrangère Ecureuil and the Chevalier de l’Ordre des Arts et des Lettres. When, in autumn 2018, I approached Delahaye in search of correspondence from McGahern he responded generously and supplied me with meticulously filed letters in both directions. “Rereading them,” he wrote, “gives me the feeling that John is alive again. He always was very alive. And of course he has remained alive in my heart.”
Frank Shovlin is Professor of Irish Literature in English at the Institute of Irish Studies, University of Liverpool. He is editor of The Letters of John McGahern which will be published in September by Faber & Faber.