Was the Belfast artist ‘aloof’ and ‘enigmatic’ – or simply misunderstood in his time? 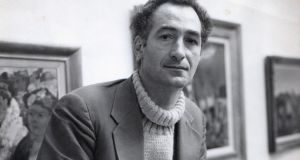 When I began researching Belfast painter Daniel O’Neill and his contemporaries Gerard Dillon and George Campbell more than a decade ago, I was surprised how little information was available on his background and on the latter part of his career after he moved to London in 1958.

Descriptions varied:  “aloof”, “enigmatic”; “mysterious”; others leaned towards his mercurial temperament. O’Neill is reported to have repeatedly kicked a painting down a street in a fit of rage after one gallery owner in Belfast rejected his work. Personal memories recall a soft, velvety voice and handsome face, with many remarking on his imposing height (6ft-plus) and attractiveness to women. Stories of his drinking and affairs included one account of a wealthy baronet’s wife on his arm regularly at RHA openings. A younger generation of painters pointed to his Romanticism in heralding his painting techniques, singling out effects on his clothing. One painter bestowed him the title “a gift of jewellery”.

Belfast painter James MacIntyre claimed a trip to Paris had changed him, adding that while other artists such as William Conor were sighted in the city wearing a raincoat, pork-pie hat and bow tie, O’Neill cut a dramatic figure striding through industrial streets wearing a cloak and a fedora.

I began to wonder if O’Neill was a troubled womaniser or simply a rebel as a result of wartime restrictions. A chance encounter with someone whose family were friends of O’Neill in the 1960s revealed another narrative. Piecing together the 12 missing years from 1958 to 1970 pointed to someone who had been judged unfairly and misunderstood. Combining what I did know with the new evidence, a sensitive man began to emerge, one whose paintings seemed to be a response to landmark events in his life.

Evidence also revealed a bondage of debt to his dealer of which his friends were unaware. Reviewing his career, it became apparent that for more than 10 years O’Neill had struggled to become an artist and when the opportunity arose, despite success, he rarely had the artistic freedom that he wanted or yearned for. Looking ahead in 2018 to the centenary of his birth in 2020, it seemed a timely opportunity to shine a light on O’Neill’s life and resurrect him from obscurity.

Born during the War of Independence, O’Neill and his family belonged to the minority Catholic population in a working-class enclave in west Belfast. After Partition, Belfast Catholics needed to rely on family connections and the Catholic Church for employment. O’Neill started painting watercolours at the age of 12 and spent his spare time in the Belfast reference library studying the Italian Renaissance painters.

Leaving school, he served his apprenticeship to his father’s trade as an electrician and for the next five years worked night shifts so he could paint during the day. His early paintings after the bombing of Belfast in 1941 seemed to reflect a man who had witnessed human despair and suffering in addition to experiencing the physical damage to the fabric of his city.

His friendship with Gerard Dillon offered him a beacon of hope. Dillon, who had shown his work in Dublin in 1942, encouraged his friend to pursue his dream of becoming a painter by travelling across the Border where the neutral Free State offered exciting new opportunities. Although the South was screened off from world affairs, an influx of refugee artists in Dublin created a distinctly bohemian atmosphere, stimulating a surge in exhibitions and an interest in purchasing art.

In this period O’Neill had also met his future wife, Eileen Lyle, and painters George and Arthur Campbell, who together with Dillon held group shows in Belfast at a time when the visual arts barely existed.

Encouraged by Dillon, O’Neill finally took the bold step of showing his work in a joint exhibition with him in Dublin, where he came to the attention of the dealer Victor Waddington.

In 1945, at the age of 25, O’Neill entered into a contract with Waddington that allowed him to paint full time, guaranteeing a regular income for his family, who had settled in Conlig, Co Down. His association the dealer would continue until 1970.

Waddington showed his paintings at home and abroad – his romantic subjects were popular with a postwar audience. In 1948, with Waddington’s support, he travelled to Paris. The visit was a revelation, so much so that he extended his three-week sketching holiday to six months.

The paintings in his next exhibition at Waddington Galleries were transformed, with many works reflecting Paris’s bohemian night cafe scenes and showing the influence of French masters Utrillo and Vlaminck. Critics and writers applauded his work, labelling him “an accomplished master”, which increased demand.

At the age of 30 O’Neill’s career seemed to have reached the status he had craved. He had fulfilled his ambition of becoming a full-time painter. He was in popular demand at home and had visited Paris, still the capital of the art world, and his work was included in group exhibitions in Europe, Canada and the US. Yet around this time something was wrong.

Rumours of O’Neill’s chronic drinking and infidelities in Dublin reached Belfast. Absences from home finally caused his marriage to collapse, which led Eileen to return initially to live with O’Neill’s mother and sister. Neither could understand his seemingly destructive behaviour. Nor could anyone comprehend why he stopped painting when the media were comparing him to the “poetic genius” Jack B Yeats.

In 1952 Waddington organised a retrospective of his work in the Belfast Museum & Art Gallery (Ulster Museum). Its critical success and a relationship with a new partner, Sheilagh Deacon, restored his confidence and international institutions added his work to their collections. In the late 1950s O’Neill’s relationship with Deacon ended and after meeting Maureen Boyce, he decided to move to London, where Eileen had settled and where his daughter would locate after she completed her education.

Art trends in London had moved away from a French post-Cubist idiom and were embracing the American Abstractionist movement and emerging young St Ives painters. O’Neill’s themes of postwar isolation and confusion were now out of date. A younger generation was expressing emotion through colour and line by “action” painting on large canvases. So Waddington decided to send O’Neill’s paintings to Dublin’s Dawson Gallery and to his brother George’s gallery in Montreal, where tastes had remained largely unchanged.

Initially O’Neill worked well, experimenting with the new medium of acrylic paint, but within a few years it became apparent he could not settle in London. Cracks also appeared in his relationship with his dealer as no further exhibitions took place in Dublin after 1963. O’Neill’s expressive monochromatic paintings during this period signalled his troubled psychological state. Periods in hospital ensued and the break-up of his relationship with Maureen. On visits home at the start of the Troubles, O’Neill entered into a new arrangement with a dealer who wanted to host his first show in Belfast after a 12-year absence.

In 1970 he returned to Belfast but after two successful exhibitions in his native city and Dublin, traumatic events led to the deterioration of his health and untimely death in 1974.

Before the second World War, O’Neill’s character and personality would have been defined by ethnic segregation after the War of Independence. The economic consequences of the Great Depression and war could have extinguished his dream of becoming a painter. Yet he persisted. In the latter stages of his career in the Troubles he witnessed the same inescapable scenes of human despair and suffering he had seen as a young man.

Reviewing Daniel O’Neill’s life today, perhaps we have a better awareness of his illness and can view his paintings in their historical context. Whatever one might feel about his paintings, he deserved the freedom to paint and a greater understanding of the persistent darkness which pervaded him.

Daniel O’Neill: Romanticism & Friendships by Karen Reihill is published by Frederick Gallery Bookshop. An accompanying exhibition at the Farmleigh Gallery, Dublin has been postponed due to the pandemic.