There are no morals or heroes in this rampant portrayal of a throbbing, disappearing Barcelona 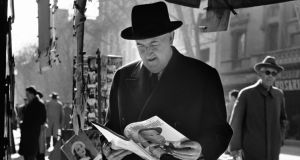 On the Ramblas: Josep Maria de Sagarra in Barcelona in 1950. Photograph: Francesc Català-Roca

It all begins with a man slowly coming back to consciousness: “His eyelids opened with an almost imperceptible click, as if they had been sealed shut by earlier contact with tears and smoke, or by the irritated secretions that come from reading too long under dim light.” The experience is likened to being in an aquarium.

Frederic de Lloberola is not in pain, just slightly annoyed at finding himself back in the squalid bed of his discarded mistress, Rosa Trenor. It is late in the afternoon, he is alone and aware of having had a forgettable dream: “The kind that leaves hardly a trace of its plot when you awaken. The kind you have when nothing is going on in your life.”

The dream just about sums up the useless character of Frederic, a bankrupt, very minor aristocrat belonging to a fallen family, who is in debt and briefly holds centre stage in Josep Maria de Sagarra’s graphic and viciously funny Catalan social satire.

Originally published to much disapproval in Spain in 1932, this is the first English translation and it is fascinating to not only compare it with the German and Austrian novels of its time but also to be aware of exactly how different Sagarra’s view of Spain was from that of the far more idealised version held by his contemporary, Ernest Hemingway.

This is a risqué novel, sustained by humour and a sleazy elegance, all steeped in ironies. Sagarra (1894-1961) knew what he was doing, exposing his society with a gleeful abandon that matches his intent. The tone is conversational and barbed; the narrative voice is that of an observer who collects information, the hints of scandal and the dormant secrets, later to gorge upon it in the manner of a vindictive squirrel. No one is safe, not even the apparently respectable elderly matrons. They too have had their adventures.

“Even more than a man, an old woman who has lived a full life retains the imprint of the past and the sensible preference of memory. Women have more passive nerve receptors, and more receptive souls, so they do not consume themselves nor do they expend all their energy in action as men do. Women are both more covetous and more foresightful. Between the folds of their wrinkled skin, they have the good faith to collect dreams.”

While Sagarra spares no one’s blushes, he does appear to be marginally on the side of his female characters most of whom are at least resourceful and usually interesting. That said, although the cast of colourful and largely idle personalities drifting through the narrative is a large one, the most prevailing presence is that of Barcelona itself which emerges as a throbbing den of indulgence for the wealthy – even the ones with no money such as Frederic – and their various intrigues, while the lower orders attempt to exploit the moral and sexual weakness of their masters.

Written as a human comedy in the style of Balzac, it is far racier than Dickens, although Sagarra certainly has the Victorian’s flair for creating characters.

The Catalan is merciless and delights in bickering dialogue. He lacks the compassion of Joseph Roth (both born in 1894) with whom he does share a socio-observational affinity. Sagarra set out to write the great Catalan novel and to do so without the usual element of polemic or the slightest element of rural life aside from Frederic’s stay at his family estate in the countryside during which he frolics with the wine merchant’s wife.

There is no moralising; Sagarra is merely describing what his omniscient narrator sees and has gathered from gossip. The period spans the end of the Restoration and the beginning of the second Spanish Republic, the old Barcelona is disappearing or at least the city as it was known to the decadent and rapidly vanishing aristocratic class is certainly on the wane.

Franco’s censors apparently had a field day with the text but everything, including references to sex, threesomes and abortions, has been restored. In ways there is no plot as such, only the many ways in which people fool themselves and others; nor is there a hero in sight.

Aside from Barcelona, though, there is a large tapestry which acquires a near symbolic significance. It had long been in the possession of the Lloberola family and when it becomes no longer possible to conceal the financial problems, the tapestry is sold to Hortensia, a society hostess who has become extremely fat and and, aside from her “loud way of speaking”, no longer seems to belong. “Anyone who ran into her would have thought she was a product of international tourism.”

The narrative itself resembles a tapestry of a large scene; there is a great deal going on in Sagarra’s random way. Private Life, a sprawling soap opera writ large, has a contemporary feel which translator Mary Ann Newman appears to have capitalised on and is similar to watching an epic home movie overseen by a jolly director with no interest in the editing room.

The action is determined by Sagarra’s interest in the characters and vivid prose. It all succeeds through the set pieces and in particular those involving the appalling Lloberola clan.

In the opening sequence, in the rare moments when Frederic’s attention is not focused on himself, he observes a starved cat licking the dregs from a cup in Rosa’s dirty kitchen. Slightly more poignant is the sight of a dog, long dead and poorly served by a taxidermist. It disgusts Frederic. As a futile gesture of commitment Rosa throws the dog, a sentimental token for her, away. But Frederic has no intention of continuing their association.

Elsewhere he sets off to beg money from his father Don Tomás, an older, larger and equally vain and idiotic version of himself. The patriarch refuses and fakes a melodramatic seizure, accuses his son of killing him and summons his wife, Leocadia, Frederic’s world-weary mother. “Leocadia cast Frederic a dry and timid glance of reproach, of pity, even of understanding, and still without opening her mouth, helped the enormous Don Tomás get up.”

Soon to arrive and share in the domestic interlude is a younger son, Guillem, a devious prankster whose antics will have deadly repercussions for a society couple. He is flaunting some bank notes and notices that the image of King Philip II is printed on them, he says, “What a face, huh? Don’t you think Papa bears some resemblance to Philip II in the portraits of him as a youth? He has the same mouth and protruding chin, and eyes that seem always to be watching a Corpus procession. If Papa had been Philip II he would already have had me killed . . . Speaking of which I hear he’s not well.”

Reading Private Life is to wander through a messy film set, spying on the various characters: there are elements of cohesion. At times Sagarra appears to be too amused to exert any control, occasionally he seems to be sober and about to slow the pace. It is very readable, slightly chaotic yet seductively atmospheric. For all the vicious side swipes, it concludes with a tender exchange between an ancient mother and her already elderly son as he fears she is about to die. He wants her to live forever, just as a reader may wish that Sagarra’s very long novel could have continued for, at the very least, another 200 pages of mischief.

Eileen Battersby is literary correspondent of The Irish Times