Poetry round-up: Kate Tempest, the phenomenon, is back 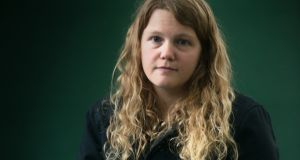 Kate Tempest is a phenomenon. At 33 she has a list of prizes and accolades as long as your arm, including the ultimate establishment nod, fellowship of the Royal Society of Literature. Her success has led to considerable pearl-clutching among the more conservative elements on the UK literary scene, and – one suspects – some mutinous but strikingly less audible mutterings among those poets who write specifically “for the page”. The back cover blurb proclaims Running Upon the Wires (Picador Poetry, £9.99) to be her first book of “free-standing” poetry since Hold Your Own, way back in 2014.

This prompts the question: what exactly is “free-standing poetry”? Poetry? The question is only partly vexatious: clearly, what is meant is that Tempest intends these poems to be less dependent than some of her other work on her compelling, urgent, impassioned vocal delivery.

The collection has a tripartite structure, beginning with The End and ending with The Beginning, and charts the painful end of one love affair and the new life anticipated in the start of another.

For all her supposed radicalism, this is a rather familiar narrative arc, but then Tempest’s work is overall less radical than her reputation would suggest. There is intensity here for sure, but the question remains whether intensity can substitute satisfactorily for skill in the more conventional aspects of composition such as scansion, lineation, imagery, verbal connotation, memorability.

Tempest’s experiments with ballad metre (see “Awake all night thinking of you”) tend to be rather ragged, her rhyming rudimentary and accent-dependent (jaw/ door; straw/ floor; hear/ idea), her grammar on the questionable side of colloquial (“my eyes fall out my sockets”).

Some lovely imagery emerges, as when she describes her girlfriend’s name as “like a bird/ Trying to burst out of my throat” or captures the detail of a moment in the aftermath of passion: “I watch the dark/ Trees and I feel the slow/ Wind and the flame is a globe on the wick,” and poems like At your mother’s funeral and We went to the river to swim are vivid and tender. There is an authentic sensibility here if you can get past the hype; but overall the reader may ask whether the extent of that hype is not the expression of a culture that values poetry too little, rather than the reverse.

After Kate Tempest’s bold, self-revelatory style it is almost shocking to read the poems of Medbh McGuckian’s Love, The Magician (Arlen House). These are poems that efface their occasions almost entirely, and do so slyly and knowingly. McGuckian’s has always been an elusive, continually self-masking aesthetic, a space where, even when the reader lacks the foggiest idea what the poem is about – a not-infrequent occurrence – the seductions of her technique and the sensuous pleasure of her language are compensation enough.

The strength of McGuckian’s poetry lies in her capacity for phrase-making; her prosody has the ring of complete conviction even when it deals in gorgeous abstractions, her nouns unmoored from their contexts, her grammatical structures unanchored from their referents:

Faithful as rain with its senses open,

its deep, earthy colour puts a well of silky

fins around the house. The lean triangle

of its head is down and governed, while its second

head inside its head (the head in its head)

gets up hungry from the conversation, goes unfed.

There is no doubt a highly coded private meaning here, but such possibilities of denotation come impenetrably cloaked in her familiar vocabulary of flowers, fabrics, jewels, weather effects. With McGuckian one confronts head-on the familiar, tired stereotypes of Irish circumlocution or feminine verbosity: there is the sense that McGuckian has been playing with and subverting such stereotypes throughout her career, that avoiding being pinned down is, for her, an existential necessity.

Prufrock’s exasperated “it is impossible to say just what I mean!” is here raised to the status of a virtue. Then there is the controversial issue of her “borrowings”, the found elements in her work. “We are what we borrow” the narrator of The Marcella Quilt slyly remarks, kitting herself out in second-hand finery. This has developed into something of an industry. Sending scholars scuttling to uncover her source-texts must make for an amusing enough academic game (a few minutes’ desultory Googling will uncover several sources for these poems, among them Nursing Yesterday’s Child by May Spaulding and Penny Welch; and Will Pritchard’s Outward Appearances, both studies of the early science of paediatrics).

The ultimate point though is that McGuckian’s voice is not reducible to this or any other “explanation”; her historical ventriloquism is simply another layer in the multi-layered, self-conscious, and shimmeringly symphonic work of which Love, The Magician represents an intriguing instalment.

Notions (Dedalus Press) is a rather self-deprecating title for well-known broadcaster John Kelly’s debut collection; a self-deprecation that belies the real accomplishment and maturity of these poems. The short poem that serves as the book’s epigraph, The Small Things, hints at his approach: a careful attention to detail, a cherishing and relishing of the quotidian beauties that are the lyricist’s stock-in-trade and, above all, a valuing of human connection.

In his obituary of Louis MacNeice, Philip Larkin remarked that “he could have written the words of ‘These Foolish Things’”, and there is a similar poignant glamour to Kelly’s work, assisted by the actual glamour of many of the poems’ occasions.

P.J. Clarke’s, for instance, describes an unexpected encounter with Frank Sinatra in a New York bar, surrounded by – brilliant description – “a muscled testudo of goons”, and records Sinatra’s gnomic utterance about Billie Holliday: “you know, kid, Lady was the best./ She walked sideways, she talked sideways/ and she sang sideways.” Of this the narrator can make little, “but as I settle up that night/ I send a JD to the back room.”

Elsewhere there are poems of great tenderness and linguistic skill in descriptions of the natural world (especially birds) and of the poet’s children and other close family members. The work bristles with names: “I was playing Aura Lee/as sung by The Shelton Brothers,/ a song from the American Civil War// a.k.a. The Maid with Golden Hair – / the very same tune as Love Me Tender/ as sung by (saving your presence) the King // and by Freddy Fender too . . .”

This is well-connected, socially situated poetry, a poetry that exemplifies that old mantra of Forster’s, “only connect!” but it also owes something to the jokey, anecdotal, and proper noun-laden strategies of Paul Muldoon. This is far from the debut collection of a writer who has swallowed and failed to digest his influences, however. The poems here show evidence of long, slow marinating, and are all the better for it.