The Scottish Clearances: A History of the Dispossessed review 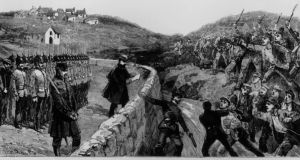 Government member reads the Riot Act to angry crofters after their land was taken away from them in early 1888. Photograph: Illustrated London News/Hulton Archive/Getty Images

Book Title:
The Scottish Clearances: A History of the Dispossessed, 1600 -1900

As Tom Devine makes clear in this powerful book, the Scots are a landless people who have retained an intense attachment to the idea of the land. Since the creation of a devolved Scottish parliament in 1999, there have been two land reform Acts and the history that is analysed in this book was a frequent reference point in the debates leading up to their passage. Important works – such as Neil M Gunn’s Butcher’s Broom – that deal with the land punctuate modern Scottish literature. In Ireland the “land question” may not be a current issue in society or politics but the Irish people are not landless. The land-purchase policies of the UK government before 1922 and the work of the land commission after that date have ensured that this is the case. This is a more important point of comparative history than the sense that the chronology and themes of Scottish and Irish rural history ran in broad parallel. There were points of similarity, of course, such as the huge extent of eviction in Ireland and the conditions that led to the famine of the 1840s, although the Scottish version was a less intense regional famine rather than a national catastrophe.

One of the many merits of this book is that it lives up to its title and covers the whole of Scotland. This is important because there have been many books about the Highland clearances, which have a pre-eminent place in the Scottish national memory. Between the early 18th century and the late 1850s, Highland society was subjected to two broad cycles of clearance. In the first, up to about 1815, landlords engaged in social and economic engineering to relocate population in the interest of creating extensive grazing lands for sheep; traditional townships were swept away and the people were removed. New “crofting communities” were created and sustained by fishing, kelp-gathering, military employment – all of which profited the clearing landlords, who deprecated emigration – and dependence on the potato. This society collapsed after the Napoleonic Wars and created the conditions for a famine in the 1840s when the potato crop failed, during and after which poverty-stricken crofting communities were swept away in a second cycle of clearance and emigration.

Less well-known and hardly remembered are the Lowland clearances. In this process during the 18th century, older forms of communal townships and farms were eradicated and a highly efficient form of improved agriculture was imposed. The burgeoning industrial economy of Lowland Scotland absorbed many of the victims of this process and the landscape was purged of traces of the older regime. These ideas were exported to Ireland in the aftermath of the Famine, when Scots graziers became hated figures in the west of Ireland. Further, many Irish landlords sought Scots land agents to bring new “improved” ideas to Irish agriculture. As Devine makes clear, these are important elements in the way that these events are elided when matters of land are discussed in modern Scotland.

In the highlands, there were additional elements that ensure the survival of the narrative. The idea of a clash of cultures and races is part of this story. Lowland Scots sought to affirm their superiority over Celtic peoples, their backward ways and their worthless language. The way in which Devine weaves Gaelic material and literary evidence in Lowland Scots into the account is especially valuable. Despite this, Highlanders were co-opted as defenders of the Empire in new regiments of the British army from the 1740s. The ruggedness of the people and their inherent martial qualities ensured their utility in this project. Elements of romanticism in Lowland views of Gaels, as expressed in the drawing rooms of George Square in Edinburgh, did not mitigate the process of eviction on the ground in the north of Scotland.

In direct prose Prof Devine lays out this history with admirable lucidity. He covers the different aspects of the process in a comprehensive account. As he writes, clearance was an “omnibus term” and its manifestations ranged from silent abandonment of traditional townships and voluntary emigration, as a way of rejecting loss of status in the new regime, to events of extreme violence and coercion. He deals with events in the border of southern Scotland and familiar events in Sutherland and other areas of the Highlands. In some ways the most compelling sections of the book are the chapters that deal with the eradication of the cottar class in Lowland Scotland, the “clearance by stealth” and the “forgotten history” of dispossession in the borders as large-scale sheep farming encroached into this part of Scotland long before it was contemplated in the Highlands. Although these matters have been discussed in academic circles, it is important that they be conveyed to a wider audience in Scotland and beyond.

One very important point that is emphasised is the extent of protest against clearance. Although this became more politicised and active in the Highland Land War of the 1880s – in which Irish figures, such as Michael Davitt, were very active – extensive protest was evident throughout the years of clearance. The balance of power was so heavily weighted towards the landlords and the state that it was very difficult for groups of small tenants to subvert the process. As well as riot and disturbance, protest was manifest in emigration against landlord wishes, Gaelic song and poetry and the rejection of the landlord-dominated Church of Scotland in many rural areas in the “Disruption” of 1843, which saw the creation of a new Free Church of Scotland.

The processes of dispossession related in this important book continue to mark contemporary Scotland. The emptiness of the Scottish countryside, north and south, is marketed as a natural and positive state of affairs. Solitude and wilderness are valuable commodities. Tom Devine lays out, in comprehensive depth, the traumatic process that created such conditions.