George Farquhar: A Migrant Life in Reverse – A compelling biography 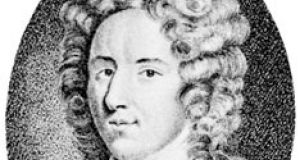 Was George Farquhar the first Irish playwright? In his brief life (1677-1707), he laid down a template which many more were to follow: upbringing in Ireland, a stint at Trinity College, Dublin (in Farquhar’s case it lasted 18 months), then relocation to London and the writing of comedies. The career of a playwright was a chancy one: you were only ever as good as your last theatrical success and dire poverty was never far away. The picture of George Farquhar as he lay dying in his 29th year presented by David Roberts in this wonderfully readable and meticulously researched biography is at one level a dismal one. His actor friend Robert Wilks tracks him to St Giles, which was “the haunt of Irish and aliens, beggars, and dissolute and depraved characters”; he finds the playwright “penniless, slumped in a chair” and dying. And yet this dismal prospect is alleviated and counter-balanced by what then occurs. There is no physical cure for Farquhar; but there is a spiritual one. “Write a play”, counsels his oldest and best friend. It was the same advice Wilks had given Farquhar 10 years earlier in Dublin, when he observed Farquhar acting on the Smock Alley stage and concluded: “You are no actor.” The result then was Farquhar’s first play, Love and a Bottle, which was given a brilliant spin some years ago by Declan Hughes in a Rough Magic production. In 1707, even though on his deathbed, Farquhar once more followed Wilks’s advice and wrote The Beaux Stratagem, a work brimming with life and exuberance. As Roberts writes: “The Beaux Strategem was published on March, 27th, 1707 following a triumphant premiere at Drury Lane on March 8th. [...]Farquhar died during his third-night benefit performance [and] was buried in St Martin-in-the-Fields on May 23rd”.

Alienated from his home culture, as Roberts puts it, seeking (unsuccessfully) to integrate into English society, Farquhar was a hybrid existing uneasily between the two cultures. This was a difficult space to occupy but a fruitful one creatively. Farqhuar’s works display a much greater social range than other Restoration dramatists and are virtually the only ones to be set in the country. In his later plays especially, he lays particular emphasis on the straitened roles women of the period had to occupy; Mrs Sullen in The Beaux Stratagem enduring a loveless marriage and seeking a divorce would be one. Farqhuar had hastily married an older widow he thought was wealthy; it turns out she was not. She came with two children and soon there were two more. Roberts treats the doubly widowed Margaret Pemell with more sympathy than earlier biographers and given what marriage to Farquhar must have been like he is right to do so.

The dramatic qualities and vivid, visceral language of Farquhar’s plays have kept them on stage into the present. The cover of Roberts’s biography has a photograph from a recent production of The Beaux Stratagem at the Olivier Theatre; and he draws throughout on the testimony of theatre directors. Roberts also lists the first-rate comic actors who have played the pugnacious Sergeant Kite in The Recruiting Officer: Jim Broadbent, Pete Postlethwaite and Northern Irish actor Colin Blakely. His plays haven’t been seen much on Dublin stages in recent years but playgoers with longer memories will recall not only Hughes’s spin on Love and a Bottle but Patrick Mason’s carnivalesque production of The Recruiting Officer at the Gate in 1985. Ian McElhinney was resplendent in a long, curled wig as the elegant Captain Plume, speaking in cultured tones except when he lost his cool and his Northern Irish accent emerged in such lines as: ‘I’m going to go and break her windows.’

The previous biographies of Farquhar, in Roberts’s view, posit too simplistic a relation between the life and the work: either straightforward continuity or straightforward opposition between the two. Roberts focuses instead on an address given by Fitzroy Pyle of Trinity’s School of English in 1957 on the 250th anniversary of its former student’s death. For Roberts, Pyle makes the most sophisticated and intricate connection between the life and the work, arguing for the element of fantasy that increasingly colours plays which represent Farquhar “not as he lived but as he would be if he had health and fortune”.

Seamus Deane has written with great insight about Farquhar; both hail from Derry, though Farquhar would have called it Londonderry. Deane zeroes in on “the opposition between the provincial and the cosmopolitan, between the natural and the artificially polished” in the plays and notes how Roebuck, the Irish rake on the make in Love and a Bottle, is both outsider and insider. These are very much the terms in which Roberts develops his approach to Farquhar’s life and art and he might accordingly have drawn more on Deane’s writings. But this is a rare misstep in a compelling biography that brings the migrant Irish playwright vividly to life. It makes a powerfully persuasive case for the ongoing relevance and stageability of Farquhar’s drama. Perhaps some Irish theatre company will respond to the challenge.