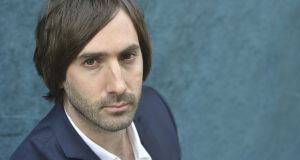 Paul Lynch: In choosing not to examine the particularities of its political and economic causes, he speaks to all famines everywhere. Photograph: Ulf Andersen / Getty Images

Coming to the novel Grace for the first time, what immediately stands out for most readers is the vibrancy and lyricism of the writing. As an editor whose first fiction acquisition was The Book of Night Women by Marlon James, written entirely in pigeon English infused with the throbbing rhythms of the Caribbean, this was certainly true in my case.

I love language. And for other language lovers, Grace abounds in lyrical, at times almost dream-like beauty, in phrases that bring a sense of joy. I loved encountering the unusual turn of phrase, the clever sentence structure, the odd pairing of words in combinations that seem at once foreign and yet utterly accessible and fresh, that pull you up in your tracks and make you pause to re-read and ponder, to puzzle out new meanings and reimagine the scene being described.

Here you are offered a “rock-ribbed hill”, a “wailing river of cattle”, an abandoned cottage where “the mud walls and the thatch sooted and so turf-smoked that the reek of how many years’ burning is marked into this place”, where the hungry have “gone past want to a point that is longing narrowed down to the forgetting of all else”. Such a celebration of the written word from a wordsmith of real talent.

And I know, from discussing the novel in depth with Paul Lynch, that this poetic lyricism and attention to the minutiae of language is not due to a casual sleight of hand, but the result of writing and rewriting passages with intensity of purpose and a sensitive ear. And these sentences are liberally and generously offered up for our delectation, a treat for the reader who cares to pause as they read, and ruminate. And perhaps this lush lyricism serves a deeper purpose: to salt the words we must swallow, a bright foil to the pain and suffering in this dark, haunting and unforgettable novel.

Grace opens on the eve of Samhain, the festival marking the end of the harvest. The year is 1845, the potato blight that was to usher in the Great Hunger is already ravaging the countryside of Donegal, and winter is coming.

In the dark hours before dawn the eponymous Grace, just 14, is dragged from her bed out into the front yard, and her head forced down onto “the killing stump”. Her mother grabs Grace’s hair and without a word spoken begins to hack it off as Grace struggles to make sense of what is happening:

“She thinks, the last you will see of Mam is her shadow. She thinks, take with you a memory of all this. A sob loosens from the deepest part and sings itself out.”

And this setting and this passage give some small indication of the enormous rewards awaiting readers of this astonishing, ambitious novel.

As the famine takes hold, Grace, dressed as a boy and with her hair now shorn and breasts bound, is sent out to fend for herself in a world made the more dangerous by extreme poverty and hunger, secretly accompanied by her young brother Colly. We follow her on her harrowing journey, and experience with her the searing horrors facing the impoverished population, and the devastation that famine wreaks on the social order when it is pitted against the individual struggle just to survive. And despite the misery and deprivation we see all around us, we follow willingly, because we are ourselves accompanied by the most glorious, haunting prose – this is a soaring choral of a novel. It sings with language that entrances and bewitches with the most piercing descriptions and thoughtful, unusual turns of phrase, that together act as a foil to the almost Steinbeckian, hard-hitting realism of the brooding famine that dominates the novel.

Through it all we follow Grace, a plucky survivor who faces constant danger, hunger, malnutrition, exposure, theft and personal assaults as she wanders this tortured apocalyptic world. And travelling through Ireland, passing herself off as a boy, Grace does whatever it takes to survive, working for food and sometimes for shelter, as cowhand, domestic help, con artist and thief, trailing the anxious reader in her wake. When she loses her brother to drowning after falling into a river whilst fishing out a sheep’s carcass, we share her shock and her denial, and are mollified, as she is, when Colly returns as a constant voice in her head, commenting, advising, cajoling and cracking jokes. He offers welcome relief to both Grace and us.

Travelling with Grace we meet a host of memorable characters. From the brutish rent collector Boggs, from whose lecherous clutches we soon realise Grace’s mother has actually saved her, to the many who helped and protected Grace along the way like the gentle Bart with his withered arm. Their descriptions so easily capture with a pen stroke their character and their situation. We see so clearly the “entire family hilled together with their belongings on a passing cart, rooted together in silence like some old tree gone to wither”, and the threat obvious in the “prayerful face” and “serpent’s touch” of the evangelical charlatan “Father”.

And beyond limpid language and deft characterisation, one of the things a novel like this can offer us is a window onto the world of the other. The Great Hunger took place in the mid-19th century, when Ireland lost almost 25 per cent of its population to the horrors of starvation and to emigration. In choosing not to examine the particularities of its political and economic causes, Lynch narrows his focus onto the universality of the human experience, on its devastating impact on both the social fabric and the individual. In doing so he speaks to all famines everywhere, and in reading Grace, we can better imagine the terrible toll they take on an undeserving population anywhere, in the past and in today’s troubled world.
Juliet Mabey is Paul Lynch’s editor at Oneworld. Paul Lynch talks to Laura Slattery in the Irish Writers Centre, Parnell Square, Dublin, on June 21st, at 7.30pm. It will be recorded for the Irish Times Book Club podcast on June 30th