Plus a Lebanese family mystery, and biographies of mavericks Poly Styrene and Buck Whaley 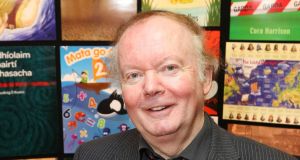 Alan Titley: one of the foremost living writers in the Irish language. Photograph: Maxwell

Writers are not always a gift to their critics. How to make sense of a body of work that stretches across the novel, poetry, drama, journalism and criticism itself and repeatedly mocks the pretensions of critics to capture the anarchic diversity of the individual talent? Máirtín Coilféir in this captivating study of one of the foremost living writers in the Irish language not only rises to the challenge but offers a refreshingly new take on the writing of Alan Titley. The literary experimentalism of Titley’s first novel Meirscrí na Treibhe (1978) and the lexical exuberance of his later short story collection Eiriceachtaí agus Scéalta Eile (1987) has often led to the writer being typecast as a feckless literary postmodernist, enjoying the linguistic party but not greatly exercised by what happens when words are rumbled by awkward realities. By tracing Titley’s abiding ethical concerns, from his prose fiction to his newspaper columns, Coilféir demonstrates how profoundly mistaken this view is. Indeed, the sheer force and continuity of Titley’s anti-imperialist, anti-racist and anti-capitalist polemic situates his writing in the company of islanders from the other side of the Atlantic – Édouard Glissant, Frantz Fanon and Aimé Césaire – who in the French Caribbean, like Titley, saw no contradiction between the reinvention of language and the war on complacency. Michael Cronin

The Storyteller, Pierre Jarawan’s debut novel, is simultaneously a family drama, a mystery story replete with secrets, and an insightful engagement with the chaos of Middle Eastern politics.

At the centre of the narrative is an absence. Samir, the novel’s narrator, recalls the manner in which his father disappeared out of his life completely having arrived in Berlin from Lebannon in 1982 to begin a new life, and the mysterious phone calls which precipitated the event that haunts him into adulthood.

Sinéad Crowe and Rachel McNicholl’s translation is nuanced and full of depth, which means that Jarawan’s style is showcased and not impeded. The non-linear nature of the narrative urges the reader forward on a journey that never moves in a consistent direction but is no less compelling because of that. The relationship between time, memory and identity is explored through Samir’s recollections and experiences, inviting the reader to invest completely in a character that is intuitively drawn and extremely relatable.

In a novel that is complex, multi-layered and always engaging, Jarawan skilfully negotiates the roles of storyteller, mediator and educator. Becky Long

Oh my goodness, hats off to publishers Omnibus Press, writers Celeste Bell and Zoë Howe for this tribute to the ever-fabulous, utterly original punk icon and feminist Poly Styrene. In large format, Dayglo is part ’zine, part scrapbook, crammed with a medley of voices, including Poly’s from diary entries (she died in 2011), with artwork, lyrics and photographs. A bi-racial kid from a ferociously working-class background with an Irish/Scots mum and Somalian dad, she ran away at 15 clutching £3, bummed around festivals and squats and “found confidence”. Famously turned on after a Sex Pistols gig – there were only 30 people there – aged 19, she ripped into the 1970s punk scene with her foghorn voice, bin-liner costumes and witty up-yours attitude. Her lyrics presciently worried at consumerism, genetic engineering, climate breakdown, identity. Tragically, she broke down, was wrongly diagnosed, joined Hare Krishna and largely disappeared from the scene. Bell, her daughter, manages to be proud and honest: life with a manic mum was hell and what shines out here is her mum’s brilliance, strength, fragility and fearlessness. What a story. Rosita Boland

Buck Whaley was one of the greatest adventurers in Irish history, who dissipated what would be €100 million in today’s money. Some of his defining characteristics were “a tendency to set off on ill-considered escapades, an obsession with achieving what few or none had accomplished before, and a cavalier attitude to danger”. He was one of the worst gamblers in an age (18th century) noted for gambling. His biggest wager was that he could make a round trip to Jerusalem within two years, for which he stood to win £15,000 (about €5 million today). Amazingly, he did it in 10 months, surviving accidents, pirates, serious illness and an infamous Ottoman governor nicknamed “The Butcher”. Returning to Dublin in triumph, he was feted by high society, but the inveterate gambling continued. Other madcap adventures included a failed attempt to climb Mont Blanc and an abortive effort to save Louis XVI from execution. Two of David Ryan’s main sources for this lively, informative, accessible and well-written biography are Whaley’s own published memoirs and a journal Capt Hugh Moore, his travelling companion, kept of the Jerusalem journey. Brian Maye