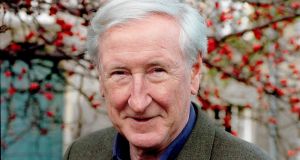 John Montague. 'When John died, I experienced something like extreme fear, a literal shaking of the body – but my spirit seemed also to shake.' Photograph: Paddy Whelan

In late November 2016, John and I were full of hope and dread. Our hope was like everyone’s, sometimes strong and at others fragile. The dread was both public and private: public because it involved the brusque bustle of hospitals. And private because it was intensely to do with John’s very life, and the intimate world we had made together.

CS Lewis wrote: “No one ever told me that grief felt so like fear.” When John died, I experienced something like extreme fear, a literal shaking of the body – but my spirit seemed also to shake. The world felt curiously hollowed-out. I was nearly puzzled that other people, going about their lives, did not detect this new hollowness in things: in the streets, in the air, in the heart. But, of course, the larger measure of grief is unshareable. I picture that part of grief – the not-shareable part – as a kind of sphere or pellucid globe, positioned at a point between my heart and stomach. It is at once a presence and an absence, but it is heavy, and must be endured alone.

Then there are the parts of grief that can be shared: ceremonies; commemorations; celebrations of John’s poetry. Shortly before his death, he completed his last book, Second Childhood, delicate lyrics that explore his early life, and focus on trauma, and recovery from trauma through love and through poetry. John told me that childhood had grown vivid in his memory, full of bright colours which he wanted to describe precisely. We edited the poems together, and sent them to Peter Fallon at the Gallery Press in November.

I am, in fact, lost without him. There are days when the whole world seems laid waste

Shortly afterwards, on December 10th, John died. But in the early hours of that morning, when his daughter Sibyl and I tried to leave the flat to say goodbye to his body in hospital, we could not close the door. We tried many times, but it kept blowing open, again and again.

The night before John’s final decline, I hurried over to him after signing the completion papers for the purchase of our new apartment. Even in the arid atmosphere of hospital, his eyes shone like lamps. He clasped my hand and said, “You know, I’m lost without you”. I told him I was lost without him, too, but that we were about to start a new life in a new home in the new year, and that this period was like a second courtship, with me hastening up the busy streets to visit him and the pair of us cradling each other’s hands and speaking of love.

One solace I have had over the past terrible year is the knowledge that John was – and is – deeply loved. Few could touch the quick of things as he did in his verses: “Luminously as possible”. I am, in fact, lost without him. There are days when the whole world seems laid waste, although both John and I foresaw that he would die before me – there were 28 years between us.

Once, I asked: “How will I go on? Life will be so parched and empty without you.” But he gave me one of his playful glinting looks and answered: “Nonsense. You have your own destiny to fulfil, your own books to write and my literary estate to manage. You’ll just get on with it.” Which is what I have been trying to do, during this first year of ‘withoutness’.

So, for myself, I would seek

no other final home, than

which gave me gentle nourishment

when I was most in need of it;

and still gives solace. In dream

I leap across stone through stream,

stride from road to lane. And even

cities where I am known

I am stopped suddenly by

the sight of some distant hill

or curving twilight river, to see

on a ghostly mound, my abiding