One Dublin One Book: Leonard and Hungry Paul, by Rónán Hession, is 2021 choice 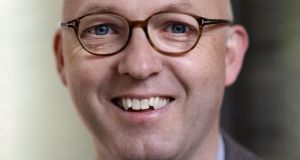 Rónán Hession: “As a story about gentle people learning how to engage with the world without becoming overwhelmed by it, I hope Leonard and Hungry Paul resonates with people at this time of great uncertainty.” Photograph: City Headshots Dublin

Sometimes gold does drop into your inbox. One Friday night an email arrived that just said “Leonard and Hungry Paul” by Rónán Hession. Intrigued, I read the first line. “Leonard was raised by his mother with cheerfully concealed difficulty, his father having died tragically during childbirth.”

I knew I was reading something special, incredibly special, and after reading the first three chapters I emailed Ronan asking if he could send the full manuscript. He did. I read it in a few hours and immediately sent him a contract. I think he received the offer while buying some books in his lunch break at Books Upstairs in Dublin.

I sent it to our lead editor Lin Webb and within three hours she phoned, and she agreed: Leonard and Hungry Paul was brilliant. It didn’t require too much editing, just some tweaks and polishing and we launched the book at Hodges Figgis in Dublin on Thursday, March 18th, 2019.

The response has been phenomenal, and it has become a word-of-mouth bestseller both in Ireland and Britain and it has just been published in North America. We are all absolutely delighted to see that it has been chosen by Dublin, Unesco City of Literature as this year’s One Dublin One Book.

One Dublin One Book aims to encourage everyone in Dublin to read a designated book connected with the capital city during April every year. This annual project (previously known as Dublin One City One Book) is a Dublin City Council initiative, led by Dublin City Libraries, and promotes reading for pleasure.

Mairead Owens, Dublin City Librarian, says: “On behalf of Dublin City Council Libraries, I am delighted to have the opportunity of promoting this wonderful book by Rónán Hession. It reminds us all that life is precious and that there are many challenges facing us as we negotiate daily life. The book is uplifting and positive and gives comfort at this time. The book is a treasure and will hopefully encourage many more readers to seek refuge and sustenance from reading.”

The reading initiative has been a feature of Dublin’s literary calendar since 2006. Pprevious books chosen include Tatty by Christine Dwyer Hickey (2020); The Country Girls Trilogy by Edna O’Brien; The Long Gaze Back edited by Sinéad Gleeson; Dubliners by James Joyce; Bram Stoker’s Dracula; The Picture of Dorian Gray by Oscar Wilde; and Strumpet City by James Plunkett.

Leonard and Hungry Paul will be available to borrow from all public libraries nationwide and electronically through the BorrowBox app. A new One Dublin One Book edition of the book will be available from next month and a programme of online events will be announced in early March.

Rónán Hession said: “I am deeply honoured and sincerely grateful that Leonard and Hungry Paul has been chosen as this year’s One Dublin One Book by Dublin City Council. As someone who has lived and worked all my life in the city, this means an awful lot to me. Dublin has a fine literary heritage of course, but it is also home to a thriving contemporary literary culture. We have talented writers, innovative publishers, ground-breaking literary journals, enthusiastic booksellers, fantastic libraries and librarians, supportive newspaper editors, creative event organisers ... and most importantly of all, voracious readers.

“I hope that One Dublin One Book will help to introduce Leonard and Hungry Paul to new readers across the city. I will be looking out for it on the Dart and on the buses, in its fine new Dublin blue jacket. I look forward to the city’s vibrant book clubs reading it and discussing it. As a story about gentle people learning how to engage with the world without becoming overwhelmed by it, I hope Leonard and Hungry Paul resonates with people at this time of great uncertainty.

“I am particularly pleased about the role played by Dublin City Council libraries in the One Dublin One Book initiative. I remember as a child in the 1980s, dropping into Coolock library to borrow books after my weekly swim in Northside swimming pool. I’m still a regular library user and am appreciative of all the help and support I get from the librarians in my local library in Baldoyle, who are thanked in the acknowledgements of Leonard and Hungry Paul. A library card is a magical thing: it provides a free lifetime supply of interesting books from anywhere in the world. What more could anyone’s imagination wish for.”

In true Oscar fashion I would like to thank some people who helped the book on its way. Of course, Rónán for writing a book that I think will be around for a long, long time, a book that has given so much solace to people in these troubling times. Kit de Waal was an early adopter as were Donal Ryan and Sarah Moore Fitzgerald at the University of Limerick and Rick O’Shea from RTÉ gave it some wonderful airtime too. But it is the booksellers and librarians who have taken the book to their hearts, championing a quiet story that celebrates the small acts of kindness that can mean so much in the maelstrom that is the 21st century and share it with their readers.

As a small publisher without the heft and marketing budget to roll out a massive campaign for our books, the One Dublin One Book is, without going all Kate Winslett, the best thing ever to have happened to us at Bluemoose and I’d like to thank Mairead Owens. and her team for choosing Leonard and Hungry Paul.

And our publishing relationship continues with Rónán as we look forward to publishing his second novel Panenka in May and his third, Ghost Mountain, in 2024.

Thank you and I do hope you enjoy reading Leonard and Hungry Paul – Kevin, Hetha, Lin, Leonora, Annie and Flora