The Hate U Give author on teen sex, writing about the world pre-internet and young black fathers 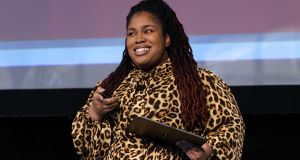 “Going in, I knew this book was going to be prime banning material,” Angie Thomas says, with a laugh that’s half amused and half all too familiar with the experience. “We’re not just talking about gangs and drugs, we’re also talking about teen pregnancy and teen parenthood – sex.”

“I know, clutch your pearls. But the thing is, these are real things that young people are dealing with.”

The American author is speaking of her latest young adult novel, Concrete Rose, and her determination to write about the authentic experiences of today’s teenagers despite resistance from hand-wringers is one that will resonate with many authors in that field.

Not every author, however, stays on the New York Times bestseller list for 200 weeks and counting – as is the case for Thomas’s 2017 debut, The Hate U Give. Pitched as a “Black Lives Matter novel”, it depicts the political awakening of 16-year-old Starr after losing a close friend to police violence. As is so often the case when a white officer shoots an unarmed young black man, justice is not served; a grand jury fails to indict him, and protests both peaceful and violent break out.

The book, adapted into a movie starring Amandla Stenberg, has been frequently challenged and banned in American libraries and schools – occasionally for its portrayal of police brutality (and alleged “anti-cop” stance), but mostly for its use of profanity and depiction of drug use.

Most challenges to young adult literature – whether in the form of an online mob denouncing an author or a campaign to remove a title from a particular library – are highly selective when it comes to what is deemed unsuitable for young readers. Sometimes it’s easier to zero in on a “bad word” – whether swear or slur – rather than engage with the content or context. (There are, of course, parallels here to the kind of over-policing of black youth that Thomas writes about.) And sometimes there’s a clear skewing of priorities.

Thomas is quite right to note teen sex as a ban-worthy “issue” – just as many fear that sex education will encourage underage shenanigans, many worry that the depiction of something in fiction means endorsing it. This is particularly the case for YA fiction, read by a wide audience but associated with teenage girls – a group whose consumption of literature has been fretted over for centuries (see Jane Austen’s book-addled heroine in Northanger Abbey).

When parents and guardians worry about books, they tend to worry about sex rather than violence. Tempting though it is to insist this is purely an American issue, conversations with Irish booksellers indicate it happens here as well. It is less controversial to describe a decapitation than it is to mention contraception.

That being said, Maverick, the aptly named protagonist of Concrete Rose, is a little careless on such matters – understandable considering he’s a 17-year-old boy, perhaps, but also because sex education in the US is often so inadequate. Thomas’s home state of Mississippi currently offers either “abstinence-only” or “abstinence-plus” (sex education with a heavy emphasis on abstinence) programmes; it also (not coincidentally) has one of the highest rates of teen pregnancy. And this book is set in the late 1990s, when having access to the internet in your pocket was unheard of.

“It was refreshing, more so than it was difficult,” Thomas notes of writing about a pre-social media time. “Because, if nothing else, it reminded me that life existed before Twitter and Instagram, TikTok and Facebook, and it was fine – that stuff is not nearly as important as we sometimes give it credit for being.”

The world of Concrete Rose is one where caller ID (on a landline) is a novelty; where handwritten notes are left because text messages aren’t an option. Thomas acknowledges the benefits of social media, particularly for social justice movements, but also recognises that “it consumes so much of us”. At the risk of sounding like “that old person, ‘back in my day…’”, and conscious that she’s still only in her early 30s, she hopes that younger readers “see, wow, you can have a life without that stuff” and without constantly being online.

It was a relief for her, too, to “write about a time where not only was there no Covid, there was no Twitter, no presidents on Twitter, no trolling”.

Speaking of American presidents (but not that one), the novel features this line from Maverick: “Ma say Bill Clinton the closest thing we may ever get to a Black president.” It tickled Thomas a little to include it – “because for so long, that’s what black people said here in America! It didn’t seem like an Obama was a possibility.”

Another “nugget” is a reference to basketball player Kobe Bryant, who died last January: “It felt like a fitting tribute to him – and it felt nice to go back in time to where this basketball legend is just starting out, and there’s so much hope.”

Hope is a vital part of Thomas’s writing, despite the frank acknowledgment of hardship. The character of Maverick – who grows up to be the father of Starr in The Hate U Give – is the focus of this novel because people wanted to know more about a man who had “got out” of a gang. This included Russell Hornsby, who played the character in the film adaptation and “did a phenomenal job. When he stepped on set, he was Maverick whether the camera was rolling or not. He became that character in such a way that it blew my mind.”

Hornsby asked questions to help shape the character in his own mind, some of which were responded to on the fly. “It was definitely like being put in the hot seat,” Thomas says.

The artistic challenge with a prequel was, of course, “everybody’s going to be like, well, we know he doesn’t die . . . you can’t scare us on that”. What Thomas realised was that children don’t know everything about their parents. (She doesn’t yet have children of her own, but is in the process of adopting a dog – a “stepping stone” of caregiving.)

For Starr, “there will be some things about her father she might never know”. This allowed Thomas to craft a story that still offers surprises. It’s also a chance for us to see this “good dad” in the early days of parenthood – “the ups, downs, highs and lows”. There are an awful lot of bodily fluids, and Maverick is not impressed. But “at the end of the day he sticks it out, he sticks through it, and he’s there”.

Showing a young black man doing this is significant. “People act as if Maverick is a unicorn,” Thomas observes, but “you can find young men like him pretty easily, young fathers who are involved in their children’s lives. And it’s important to show that specifically when it comes to young black men because there is this assumption that when the going gets tough, they get going. And that’s not true. Statistics show that black fathers are more involved in their children’s lives than any other demographic.”

There’s also a tendency to overstate the percentage of “absent black fathers”, focusing on marriage rates rather than fathers living with or taking care of their children. Concrete Rose features tender moments alongside the frustrating ones, with Thomas keeping “the real Mavericks out there” in mind and not wanting to “sugarcoat things” – but also hoping that “people will start to rethink the assumptions that they make about young fathers and young black fathers”.

Alongside the hope, there is gratitude – towards her editors, for letting her “do [her] thing” when writing rather than asking her to tone it down. She’s “thankful for other books that, in a way, gave me permission to tell this story”, and for YA featuring far more black writers than it did several years ago, so many that “we can no longer count them on one hand or two”.

And Thomas’s face lights up when she talks about her readers, some of whom have already read advance copies of the new book and have been in touch to say they “get” Maverick. “That’s what it’s about. Human connection. Finding the ways in which we are the same.