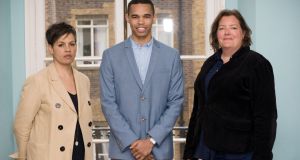 During my time in boxing I learnt that there are people who talk better than they fight, others who fight better than they talk, but that it took a special type of individual to do both to a high standard. After first reading through the Kit de Waal Scholarship application form, then going on to be interviewed by the person behind the initiative, I knew that Kit was one of the latter, one of the few whose walk and talk are aligned.

A two-year creative writing scholarship at Birkbeck University, access to mentoring and workshops, continued support from various literary organisations, a new laptop to work from, all costs covered. I sat in my room reading through the application form on a November Sunday morning, back in 2015, thinking to myself, who does this… who is this person? … and what a great name she has.

Along with my younger brother, I was raised by my mum in one of the more destitute parts of Birmingham, an area of the city that hadn’t yet warmed to people with skin tone any darker than that of a porcelain doll. It was rare to hear anyone on my street share a conversation about a book, let alone say they wished to be an author or a poet.

Beyond the basic level of communication required for day to day living, any investment in words was regarded as unnecessary embellishment. I was 24 when I read my first novel and didn’t know what the word novelist meant until a year later. But I always loved language. I listened far more than I spoke and understood how choosing the correct permutation of words was the difference between my being punished for misbehaviour and being exonerated – I had learnt the power of language at too early an age for it not to take on a Machiavellian slant.

Since childhood, I’ve always been fascinated by how my mum’s side of the family, her parents having arrived here from Ireland in the fifties, were able to share poignant stories in a dry manner and yet be so incredibly funny at the same time. How they seemed to place an expletive at the perfect point in a sentence – sometimes stretching it out, other times delivering it short and sharp – to give both the story and their opinion of it great resonance. They spoke of camaraderie in the face of despair with a mastery that appeared innate, something well beyond my reach. Any skills I have developed in storytelling, and profanity, I attribute to the sharing of those narratives.

When at last I decided to share my own stories, I knew I had a lot of catching up to do. I started by reading the classics, imitated the daily routines and styles of great writers, and copied out extracts to dissect their rhythms. I gave up any social life I had, began each day at 4am, and worked as though my life depended on it; because in a way it did. I’m a writer and nothing else fits, which isn’t an easy thing to explain to the same deadpan Jobcentre adviser on a fortnightly basis.

Stories are essentially characters in action, a world in which to reside when you wish to take a break from this one

The years of hard work and going without much food or finances turned out to be the perfect apprenticeship for my becoming a writer. Without realising it, my upbringing had laid the foundation for my dream profession. The same characteristics I’d once considered a hindrance for becoming a published writer – being mixed raced, working-class, and from Birmingham – I began to see as a blessing, an advantage that gave me access to experiences I don’t much see on the shelves of bookshops. I soon learnt to accentuate the differences between myself and others within the industry instead of attempting to fit in.

It’s important to recognise that when we’re talking about the omission of the working-class in publishing, we’re also talking about the exclusion of different races of people. The writer of Irish or Jamaican heritage may find it challenging to reference their own personal experiences, along with those of their ancestors, without giving an account of life for the proletariat.

Stories are essentially characters in action, a world in which to reside when you wish to take a break from this one. A publishing industry deficient in stories written by a class of people who live through incredible experiences, and spend much of that time creating alternative worlds to escape their own reality, is beyond belief, not to mention self-defeating.

I’ve no doubt we’ll see a great shift towards books written by working-class writers over the next two to three years. However, I believe the significant changes that are being called for will only materialise when those in publishing realise just how lucrative the market for working-class books can be.

Kit’s success and tireless efforts towards lifting the disadvantaged not only encourages working-class writers to dream big, but also illustrates the importance for all people, irrespective of their social class, to reach back in any way they can and lend a helping hand to those in need. A child who fails to see herself represented in bookshops has little option but to feel her life is not worth the representation. Kit continues to show writers from working-class backgrounds and those in publishing that we most certainly are worth the representation; that we always have been.

Sooner or later the world must turn to face those stood in darkness, and when it does, when the publishing industry eventually shines a bright light on the working class, I like to think myself and many others with similar upbringings will be stood beside the likes of Kit de Waal saying, “Welcome. I’m glad you could join us.”
Stephen Morrison-Burke is the first recipient of the Kit de Waal Scholarship that funds a place on the MA in Creative Writing at Birkbeck College, London