Ireland’s first diplomat: ‘a travelling salesman for the Free State’ 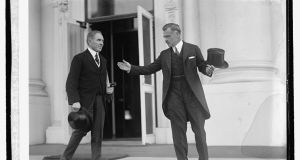 Historical memory is invariably selective. Thus many of those public servants who played a vital role in establishing and directing the future development of the Irish Free State have eluded the attention of historical biographers. Moreover, insider accounts of men and women in public life, such as Todd Andrews’s fascinating memoirs of 1979 and 1982, and which in Leopold von Ranke’s phrase throw so much light on past time, “as it really was”, are all too rare in Irish historiography.

It was therefore doubly fortunate that in addition to the hitherto little explored but substantial holdings in our national archives dealing with Timothy Smiddy’s public career as academic, diplomat, public servant and adviser to government, his eldest daughter Pearl (1903-2003) should have accumulated some 200 family letters and photographs, a number going back to the 1870-1890s.

Why should the Professor, as he liked to be known long after he had left University College Cork, merit our attention? On several grounds, not least for his role in promoting Irish-American relations. Smiddy’s signal achievement was to be the first member of a Dominion to represent his country abroad, presenting his credentials as ‘Plenipotentiary and Envoy Extraordinary’ to President Coolidge in October 1924 less than two years after the founding the Free State. But equally Smiddy’s highly varied career exemplifies the remarkable achievements of his generation of Irish public servants, so many of whom, unlike their British, North American or French counterparts, came from small farming backgrounds.

Timothy Aloysius Smiddy (1875-1962) was born in a back street off Blarney Lane near Cork’s cattle market, the eldest son of a farmer/victualler from east Cork’s Ballycrenane who would become a successful entrepreneur. Smiddy’s ambitious mother destined him for the church. Accordingly he spent several years in the Christian Brothers’ seminary school Fanferris and the prestigious St Sulpice seminary near Paris. After leaving St Sulpice and probably to escape the “scandal” of being a “spoiled priest”, he was sent to study commerce in Cologne, retaining a lifelong informed interest in French and German politics, philosophy and economics.

Back in Cork he found employment as works manager in a timber yard, marrying the boss’s daughter Lilian O’Connell and taking an active interest in Cork’s civic development while studying at night with the Royal University for his BA and MA. Among his talks to local organisations was one in 1913 to the Women’s Franchise League, advocating – as the father of four, soon to be five daughters – votes for women. He was fortunate in being on the spot when President Bertram Windle was seeking a candidate for the new University College Cork’s chair of Economics and Commerce.

Highly intelligent and widely read but without formal qualifications in the subject, Smiddy built up a successful department and faculty. He was a genuine educational moderniser, insisting on German-style seminars as a core part of undergraduate programmes and summer work placements, placing graduate students’ work for publication in journals and directing them in career choices. With his lifelong if often uncomfortable friend, Alfred O’Rahilly, like himself an ex-seminarian, he pioneered successful worker and adult education programmes as an integral part of the university’s mission to society.

Financial adviser to the Treaty negotiations, he was sent by Michael Collins early in 1922 to replace Harry Boland as “fiscal agent” in America, to study US financial systems and to counter anti-Treaty forces in the United States. Barely five feet in height – known among American officials as “the little man” – the gregarious Smiddy proved adept at public relations. He lectured tirelessly on Ireland and Irish affairs to audiences in Ivy League universities, lawyers’ associations and women’s institutes alike, used the print media, radio broadcasts and film presentation to promote the Free State’s image, while he assiduously and effectively courted newspaper editors, Wall St journalists, public officials, city mayors and leading bankers.

Describing himself as “a travelling salesman for the Free State”, he made several tours of the States and Canada. He was indeed fortunate that serious scandals – his affair with a legation staff member, the bootlegging activities of his only son and prison sentence and a daughter’s marriage with a Spaniard who proved to be both a bigamist and revolutionary – escaped the attention of a hostile press, though rumours managed to reach London, where Lady Lavery had vigorously opposed his appointment in 1929 to the Irish High Commissionership.

Smiddy’s two-year sojourn in London was less successful than his American mission and his appointment as Tariff Commissioner seemed a comedown. Following de Valera’s electoral success in 1932 he had grounds to feel anxious for his future career. Yet against the odds, the future taoiseach appointed Collins and Cosgrave’s former adviser as his (unofficial) economic expert with an office close to his own.

Smiddy’s career over the next 12 years is a prime example of the potential and the limitations of the expert adviser to government. Quite without party political allegiance or interest, he was the epitome of the cool, rational expert who responded to whatever brief was required precisely and promptly, if necessary overnight. A strategic thinker, ever pragmatic in application, many of his closely argued recommendations, notably in the areas of currency, banking and agriculture, and which in hindsight seem remarkably prescient, were ignored on ideological grounds.

But others, such as his advocacy of limiting the influence of the commercial banks on monetary policy, of management training for farmers as well as business, promotion of quality control systems in agriculture, and higher levels of practical education for girls as well as boys on the farm, fed into the institutional memory of the public service to be realised only years or decades later.

The tussle between Smiddy and the Department of Finance over his contract makes amusing reading. Thanks to de Valera’s protection he won several battles but lost the war in 1945, to retire, it would appear, to his books and his music.

Not so. Aged 72 the “Professor” embarked on a new 12-year career as chairman of the board and hands-on managing director of a debt-ridden ceramic factory in Arklow, which he transformed into a going concern as a major supplier of Irish hotels, transport services and golf clubs, with a significant export record. He persuaded the board to agree to invest in modern plant, brought staff from Stafford to up-skill the pottery workers, engaged young designers, and in his eighties was still visiting factories and trade fairs in Italy, Germany, the Netherlands and England.

As the inimitable Irish Times editor Bertie Smyllie wrote in 1949, “Professor Smiddy is a remarkable man; need I say that he comes originally from Cork. Most remarkable men do…”.
Envoy Extraordinary: Professor Smiddy of Cork by Eda Sagarra is published by the IPA and was launched in Cork last week by Michéal Martin, leader of Fianna Fáil