Our culture is obsessed with beautiful dead girls

How can I reconcile my love of crime narratives with my horror at real cases? 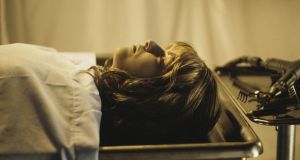 “The death of a beautiful woman is unquestionably the most poetical topic in the world,” wrote Edgar Allan Poe, the acknowledged father of the modern detective genre, in 1846. This is borne out in his work; at the centre of the first two detective stories in the history of the genre – The Murders in the Rue Morgue and The Mystery of Marie Roget – are the bodies of beautiful dead women. Not only dead, but murdered, mutilated, broken. Not only described in unflinching detail to the reader, but gazed upon, lavished over, dissected by the “lynx eye” of Poe’s detective, Chevalier Auguste Dupin. Men gaze at dead girls, the reader sharing that gaze and the resultant objectification of the victim.

Not quite 200 years later, popular literature and culture are still fascinated with beautiful dead girls or grown women termed girls for the purposes of commercial appeal. (Worth noting that author Emily St John Mandel studied the groaning corpus of crime books with “girl” in the title and found that in those books the girl almost always ends up dead). From the washed-up body of Laura Palmer in David Lynch’s recently relaunched Twin Peaks, to Megan Hipwell, the gamine murder victim at the centre of Paula Hawkins’s blockbuster, The Girl on the Train, to the murder of Hae-Min Lee covered by Serial – the show that launched a thousand true-crime podcasts – to Westworld’s beautiful android Dolores, a character that exists only to be raped, killed, and resurrected and subjected to this fate time and time again, much of our most popular pop culture is dominated by the spectacle of the beautiful dead girl.

As a creator, consumer and critic of crime narratives, I spend an unhealthy amount of time with beautiful murdered women. My days might begin writing an article on the victims of Jack the Ripper’s 1888 murders, followed by a few hours of teaching Poe’s detective stories, Stieg Larsson’s The Girl with the Dragon Tattoo, or James Ellroy’s The Black Dahlia. On my commute, I’ll listen to a podcast, perhaps Audible’s West Cork – deemed “the next Serial”– which investigates the unsolved murder of Sophie Toscan du Plantier, brutally beaten to death by an assailant in December 1996. At home, I crash out on my sofa and watch True Detective or Thirteen Reasons Why on Netflix. Dead girls, dead girls, dead girls. A question that troubles me and should trouble all of us who consume such media: how can we account for or defend our widespread obsession with women who are abused or killed, and whose beautiful dead bodies are often employed only as narrative tools leading to (often male) stories of investigation?

This ethical question becomes particularly pointed, of course, in the case of true crime. Not all manifestations of the beautiful dead girl trope occur in fiction. Some of the most compelling true crime cases of all time have at their heart dead girls: Jack the Ripper’s victims, The Black Dahlia: Elizabeth Short, the unsolved murder of American child beauty pageant queen, JonBenét Ramsey. Ramsey is perhaps the perfect iteration of the dead girl trope: blonde, beautiful, rich, innocent. This in turn perhaps accounts for why the 20th anniversary of her unsolved murder produced a flurry of media and pop-cultural re-tellings of her dreadful story: CBS, Lifetime, and A&E documentaries, even a Netflix movie, Casting JonBenét.

In true-crime news last month, both in the US and closer to home, it has been difficult not to feel overwhelmed by the emerging details of the brutal murders of a number of young girls. One of the students killed in the recent American school shooting in Santa Fe had reportedly rejected the repeated unwanted romantic advances of the male shooter. The media coverage was disturbing, with some headlines seeming to imply that she was somehow to blame. Just last month in Ireland, two young women, or rather a young woman and a girl, Jastine Valdez (24) and Anastasia Kriegel (14), were assaulted and murdered.

Cultural narratives of dead girls often implicate women in their own brutalisation: don’t wear revealing clothes, don’t walk alone at night, don’t get a “reputation”, don’t leave your drink unattended in the club. Be a good girl. Do these things and you will be ok. Not dead.

So, how can I reconcile my consumption of crime narratives with my horror at the suffering these young Irish women endured so close to home? With my horror at any brutalisation of women? I wish I had an easy answer.

Should we ban books and stories that dwell on dead women? Earlier this year, the author Bridget Lawless suggested just that, launching a new prize for fiction, for the best thriller “in which no woman is beaten, stalked, sexually exploited, raped or murdered”.

We must recognise the differences between narratives that fetishise and blame female victims and those that shine a light on systemic or domestic abuse, on misogyny and hatred

I must agree with feminist writers such as Val McDermid who have eloquently objected to the admittedly well-intentioned premise of this prize, arguing that we must be unflinching in our portrayal of women’s abuse and murder as long as it continues to happen. Excising dead women from literature unfortunately does not excise the murder of women from our lived reality. Women, after all, are the biggest writers and consumers of crime fiction; writing it perhaps to warn and reading it to prepare? After reading Michelle McNamara’s wonder book on the Golden State Killer, I’ll Be Gone in the Dark, last month, I certainly checked my doors and windows more stringently before turning in for the night.

My answers to these thorny ethical questions on reading about dead women arise out of my work teaching crime fiction. It’s my great privilege to teach a bunch of intelligent and socially conscious young men and women in the School of English at Trinity College Dublin, from whom I learn just as much as I impart. In our classes on both true and fictional crime narratives, we debate the centrality of dead beautiful women in our books and in our culture. Debates that start with dead women in fiction quickly encompass the prevalence of slut-shaming, the emergence of rape culture, the importance of women’s bodily autonomy, the fears of attack that constitute the daily life of a woman in a public place: these are the horrible preoccupations of modern life.

In our classes we talk about how popular fiction and popular culture cannot shy away from these difficult and troubling issues – it must instead recognise the differences between narratives that fetishise and blame female victims and those that shine a light on systemic or domestic abuse, on misogyny and hatred. It must lift up and encourage those that do the latter, call out and critique those that do the former.

Unlike Poe, we do not find the death of young beautiful women to be the most poetical topic in the world, but rather an ugly part of our lived reality, one that we cannot ignore. As critics, as readers, as humans, it is our duty not to avert our eyes from dead girls; rather, we owe them our fiercest, most penetrating attention.