Lessons from the world’s oldest companies: tales of boom and bust 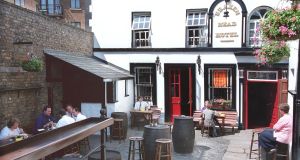 More British primary school children want to be a YouTube star than a pop singer or actor. A recent survey backed by University College London and the OECD, discovered the fourth most popular ambition among seven to 11-year-olds was a career in “social media and gaming”. Founded in 2005, YouTube isn’t much older than the 13,000 children surveyed. And the profession of YouTuber – now there’s a word – is newer still.

Last year, a Credit Suisse report claimed the disruptive force of technology means the average life of an American company is now under 20 years, down from 60 years in the 1950s. With future generations of employees apparently disinterested in once-prized occupations, and shrinking corporate lifespans, you’d be forgiven for thinking that a book exploring the relationship between longevity and prosperity would be on a hiding to nothing. Yet, as Established, Lessons From The World’s Oldest Companies, reveals, the key to success might have been with us all along. Or more precisely, behind us in 1198, 1498, 1514, 1515, 1534, 1570, 1698, 1705, 1715, 1759, 1824 and 1891.

Beginning with The Brazen Head, the Dublin pub that opened its doors in 1198, and ending in 1891 with William Wrigley’s eponymous chewing gum brand, the 12 companies – an inn, a removals company, a butchers, a ferry, a printing press, a bell foundry, a wine merchants, a stone carvers, a scale makers, a brewers, an agricultural company, and a gum manufacturer – featured in Established have outlasted war, plague, rebellion, scores of booms and busts, black sheep in the family, depression, and bloody bad luck. (The decision to focus on English-speaking countries excluded the world’s oldest company, a Japanese construction firm founded in 578.)

Established is the brainchild of Dark Angels, a creative writing for business organisation run by Stuart Delves, Jamie Jauncey and John Simmons, its name a nod to Milton’s Paradise Lost. Storytelling is at the heart of the Dark Angels approach, and each chapter in Established is fully alert to the power of a strong business narrative. Some tales are delightfully straightforward: the Hampton Ferry (1514) takes people and their stuff from one side of the Thames to the other. That’s it. The method may have changed, but the idea hasn’t. Whereas what emerges from the chapter on the Guinness brewery – so successful that 100 years after its foundation in 1759, one in 30 people in Dublin depended on it for their livelihood – is the necessity for adaptability as well as consistency. The porter itself never changes, but with Guinness Storehouse the most popular visitor attraction in Ireland, the company now manufactures tourism as well as beer.

John Hoyne describes himself as the custodian of the Brazen Head rather than its owner: “My job isn’t to change, but improve and look after it”, and understandably, this theme of succession is a common thread through the book. Alan Hughes of the Whitechapel Bell Foundry (1570) believes that loss of interest in a family business happens naturally about four generations in, and that a change of ownership forces positive renewal. His foundry makes about 100 bells a year, and as John Simmons wryly notes, “the problem with this business model is that its products last for centuries”.

Chicago-based Wrigley’s also went four generations deep before the reins left the family. In the early years of the 20th century, William Wrigley invented direct marketing by using the newly-developed US telephone books to send free samples of gum to every address listed. He must have had plenty of stamps left, because he then sent two sticks of gum to every American child on their second birthday. His son Philip withdrew their products from the US market during the second World War, sending the lot to serving forces overseas. Cleverly, he kept up the domestic advertising campaigns, so not only did the brand stay alive, but gum-chewing GIs unwittingly created a vast and eager post-war market in Europe. Win, win, win, you might say.

As demonstrated by best-sellers such as Tribe of Mentors, the hotshot’s guide to hotshottery, by Tim Ferris, or Chip Gaines’ Capital Gaines: Smart Things I Learned Doing Stupid Stuff maximising individual performance is the current business fashion. (Primary kids, take note: How To Become A YouTube Superstar is also on the shelves). Established’s thoughtful essay-style pieces buck this trend. It includes a series of snappy conclusions, yes; but these are listed as “things to think about” rather than “things to do”. There are no shock revelations, no surprising single commonality revealed, yet for large corporations awash with jaded jargon and out-of-the-box start-ups in search of a fresh voice alike, Established’s unconventional tales are worth taking time over.

As with the Hampton Ferry, “lives are lived and lost, fortunes swell and disappear. Families come and go… The river flows on and on”.