Oliver Jeffers: ‘I’ve got my wife’s bite marks tattooed on my finger’

The Belfast writer’s latest book, which features one of his favourite tattoos, is about changing the world through whimsical drawings and verse 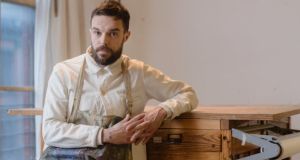 Oliver Jeffers is talking about his many, many tattoos. He has sold millions of picture books all over the world – beautifully drawn creations about, say, friendly aliens in broken-down spaceships – but his most personal illustrations by far are the ones that are etched into his own skin. The crosses on his wrist? To mark the spot where he had surgery for a torn ligament “to remind me that my body is fragile and to be careful”.

The lines on his left index finger? Jeffers’ wife Suzanne was biting him so hard as she gave birth to their daughter Mari, he thought she would break the skin (though he was given short shrift by the doctors when he interrupted the labour to say he was in pain). “The next day,” he says, “I still had those big indentations and I thought, ‘There’s something nice about that.’ So I had her teeth marks tattooed in that place.”

These tattoos – two of too many to count, he says – are depicted in his 19th solo title, What We’ll Build. It’s the latest project in a career that has taken Jeffers from children’s books to conceptual art (portraits half-dipped in paint to become meditations on memory and loss), a collaboration with Starbucks (producing their nationwide in-store displays), as well as work for U2 (including the video and cover art for Ordinary Love). Apple+ recently turned 2017’s Here We Are into a film narrated by Meryl Streep. Dedicated to Jeffers’ first child, Harland, the book was a joyful instruction manual about how to live on planet Earth. This new work was created with his Mari in mind. It sees a father and daughter gather their tools (ranging from a drill to a miniature pig) to construct their “together future” – featuring everything from a table for drinking tea at to “a road up to the moon”.

What We’ll Build is full of the usual whimsical drawings and verse, but it was inspired by a realisation, Jeffers explains, or perhaps more of a hope: “I’m going to be raising a daughter in what will hopefully no longer be a man’s world.” The 43-year-old elaborates down the phone from his house in Belfast. “If Here We Are was about understanding the world, maybe What We’ll Build is about changing it. It was about this internal dialogue: I was trying to rock Mari back to sleep in the middle of the night and I’ve always verbally outlined my intentions. My wife will ask, ‘Do you need to explain this out loud?’ And the answer is often, ‘Yes, I do.’”

Jeffers’ first book, How to Catch a Star, was about a boy on a mission to capture a celestial object of his very own. It was conceived during a gap year from art school at the University of Ulster. Within a week of sending it to publishers, he had book deals on both sides of the Atlantic. He has since made a name for himself through stories bursting with playfulness and intellectual curiosity. There is the boy who found a penguin at his door, the one who ate books “three or four at a time”, and the girl who tried to deal with bereavement by stuffing her heart into a bottle.

Jeffers had been based in New York for more than a decade but took a year off to travel the world with his family. In February, in Tokyo, “the writing was quite clearly on the wall”, and they decided to return to Northern Ireland to be close to family, including Jeffers’ father, who was diagnosed with cancer the week lockdown began.

Jeffers is talking to me during a fortnight’s quarantine at the house he has kept in his home city, with his children staying with grandparents down the road, after he and his wife made a brief trip back to Brooklyn. (He tweeted his frustration when the six bottles of red wine he had ordered from Tesco to help get them through arrived with their security tags still on.)

With offspring prone to crashing his Zoom meetings and his studio over on the other side of the Atlantic, he has found creating in Belfast a challenge. The couple had set up a quiet area in their bedroom for work calls: “But that was like a red rag to a bull to the kids, knowing that one of us was trying to avoid them. They would just come bombarding in.”

As a boy, Jeffers remembers painting the family’s cocker spaniel blue to match their new wheelie bin. Any time he is asked by grownups when he started drawing, he has a standard response: “Well, when did you stop?” He finds inspiration everywhere, from Cy Twombly and Jean-Michel Basquiat to Polish literature, marine biology, cartography and quantum physics. “Oftentimes,” he says, “I’ll get good ideas sitting in an airport, or sitting in a bath.”

Even when I’m pointing out dark things, I still think there’s a lightness of touch

His output has become increasingly political. What We’ll Build contains a reference to a Trumpian construction: “[We’ll build] a fortress to keep our enemies out, and higher walls for when they shout. But you don’t always lose, and you don’t always win. So we’ll build a gate to let them in.”

His 2018 work My Northern Irish Passport showed a travel document bearing the words: “United Kingdom of Great Britain and … eh ... Is there supposed to be another bit?” He says: “That was part of a show I had in London after the Brexit vote. A review in an art magazine at the time didn’t even get it. I was, like, that just proves the point.”

Last year, the artist created a 10ft-diameter globe for New York’s High Line, the public park built on a disused elevated railway track. “It had every single border known to man right now painted in, but instead of country names, it’s just written over and over again, ‘People Live Here.’”

Nonetheless, even while despairing about the “tribal thinking” of the Brexit negotiations, Jeffers retains a bouncy hopefulness. “I have described myself in the past as a grim optimist,” he says. “And even when I’m pointing out dark things, I still think there’s a lightness of touch there because otherwise I’d just be a nihilist. And what’s the point in hopelessness?”

His latest book is dedicated not just to his daughter but also his late mother, Marie, who died when he was 20 after living with multiple sclerosis for almost his entire life. He believes the experience gave him a “superpower” of sorts. “It underlined what was important. I liken it to being given a stepladder and being able to look over the parapet of everydayness. You can see past a lot of the pettiness, a lot of the bullshit, a lot of the minutiae. You can see to the heart of what’s worth living for, what’s worth fighting for.”

What We’ll Build by Oliver Jeffers is published by HarperCollins (£14.99)