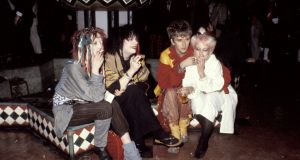 Many of those who came of age in the 1980s might have been forgiven for feeling like – to steal a line from Fight Club – history’s middle children. Their elder brothers and sisters had the Beatles, Bowie, Sex Pistols. Their juniors had grunge and gangsta rap. But for a generation stranded somewhere between the tail-end of Boomer and the beginnings of X, the closest thing they had to a cultural revolution was Frankie Goes to Hollywood on The Tube.

Known as the New Romantic era, this was a time of sartorial adventure, sly sexual subversion, social mobility and synth-pop duos. It is now the subject of Sweet Dreams, a hugely enjoyable new book by GQ editor-in-chief and veteran culture journalist Dylan Jones.

At 600 pages plus, this is a comprehensive social and oral history of a generation inspired by Bowie, Roxy Music, Giorgio Moroder, Kraftwerk, Metropolis and Cabaret, emancipated by punk rock, revolutionising street fashion, chart music and club culture, heralding the pop video and photo shoot as artform.

These Blitz kids, named after the Tuesday night Covent Garden club that provided them with a safe playground, were dandified and decadent but also politically engaged, formally unschooled but artistically adventurous.

The dancefloors they frequented were laboratories for cultural appropriation at its most glorious: Afrika Bambaataa sampling Trans-Europe Express; Grace Jones covering Joy Division; East End boys and West End girls investigating salsa, soul, funk and Afro rhythms. Their every move was photographed and documented in style bibles like The Face, i-D and Blitz, or sarky teen-mags like Smash Hits. To be called pretentious in this climate was a badge of honour.

It wasn’t just about the music, it was journalism, it was art, it was club culture, all of these things feeding into what was actually an incredibly bohemian, culturally rich period

“It’s a period which has been much maligned,” says Jones, speaking from an office dominated by a massive Prince Charles GQ cover. “Previously when people have looked back at the ’80s they tended to do it in a reductive way, the decade of no taste, of style over content, where pop music was deemed to be brittle and shrill and driven by the visual side of things because of the explosion of MTV etc, etc.

“And I suppose in my small way I’ve tried to reclaim that period, because it wasn’t just about the music, it was journalism, it was art, it was club culture, all of these things feeding into what was actually an incredibly bohemian, culturally rich period.

“But also, apart from the time between ’64 and ’68, I don’t think there’s been a time when there was such great pop music. For a period, most of the American charts were full of British acts. There’s that famous Rolling Stone cover in 1983” of a Boy George photo shoot and the headline: “England Swings! Great Britain Invades America’s music and style. Again.”

Sweet Dreams might be regarded as a suitable companion to Simon Reynolds’s Rip It Up and Start Again and the 2009 BBC documentary Synth Britannia. Reading it, one is taken aback by how relentlessly modernist – futuristic – popular music was at the time. It’s perhaps no coincidence that IPC’s controversial and hugely successful comic 2000AD, a mongrel combination of sci-fi exploitation strips and punk rock attitude, was launched in 1977.

The grim industrialists, the Futurama festival architects and the New Romantics were the children of Kubrick, Burroughs and especially JG Ballard, whose writings inspired songs by The Normal, Tubeway Army, Joy Division, John Foxx, the Human League, the Buggles and more.

“There was certainly a future-facing element to that period,” Jones says. “In the post-punk world you had a lot of people who were looking at the past but in a postmodern way, [but] you also had people who were deliberately looking to the future, driven by electronica.

“If Kraftwerk are your Year Zero, then the world you’re going to build is one driven by Futurism. You listen to Kraftwerk records now and they don’t sound orthodox, but you understand them. But when you were listening to those records in the mid to late ’70s, they were otherworldly. They had literally no relationship with what had gone before.”

That sense of a brave new world, tempered by a dystopian sensibility, was a product of postwar fallout. Kraftwerk, Can, Neu and Tangerine Dream, like their contemporaries in the New German Cinema of the ’70s, wanted to build new cultural cathedrals after the disgrace and desolation of the second World War.

Similarly, in a blacked-out Manhattan, young MCs and DJs from Harlem and the Bronx were devising the source codes for afrofuturism. Britain’s glam-punk youngsters were raised in a wasteland of potholes, power cuts, industrial strikes and uncollected rubbish piling up on the streets. Kraftwerk’s 1975 appearance on the BBC’s Tomorrow’s World was, in its way, as important as Elvis on Ed Sullivan or the Sex Pistols on Bill Grundy.

You look at a lot of the so-called New Romantic acts and they were demonised because they dressed up, they were very visual, they dared to be ambitious

“Kraftwerk were trying to build something that was very modern and very Germanic, and I think that sensibility helped drive a lot of what was happening in the UK,” Jones considers.

“The book doesn’t really cover this, but you can look at some of the industrial bands that started in the late ’70s and assume that they are contemporaneous, a comment on the industrial decline around them. But you could also say that they were very abstract records, and they were using that industrial landscape as a springboard.

“You look at a lot of the so-called New Romantic acts and they were demonised because they dressed up, they were very visual, they dared to be ambitious. I think one of the core things is that [with] post-punk, you had to have an ideology. It helped if people could hum your record, but that wasn’t the most important thing.

“If you read the NME in the late ’70s, you weren’t allowed to own up to the fact that you wanted to be successful. [But] apart from Gary Numan I don’t think there’s a person, of the 150 people in the book, who would claim to be anything other than leaning to the left. And yet everyone involved in this world was cast as a money-grabbing, ambitious Tory because they dared to be successful. Which I always thought was preposterous.”

If anything, the New Romantics’ sense of sartorial elegance – some might say arrogance – was directly in line with the working class tradition of pride in one’s appearance, of dressing up for the weekend. They were direct descendants of the Northern soul boys, the Mods and the Modettes.

“That’s something Gary Kemp is very eloquent about,” Jones says. “Regardless of whether you like Spandau Ballet’s music, or how ridiculous you thought they looked, the orthodox left-wing inkie music press did not know what to make of them because they were working class. Apart from Tony Hadley, they were all card-carrying socialists, and yet they were in this ridiculous New Romantic band and they were desperate to be successful and, according to the likes of NME and Sounds, all of that was wrong. Which I think is funny.

“Now it seems farcical that we talk about these little factions. It’s still interesting to look at that sector’s inability to cope with the fact that George Michael or Gary Kemp would want to play on a Red Wedge tour: ‘If you are so culturally bereft, you’re not good enough, you’re not a talented enough artist to hold our flag, you can’t be supportive of this political ideology’ – that’s basically what they were saying.

“There’s a quote in the book from a friend of mine, Fiona Dealey, one of the original Blitz kids who came from Southend. She talked about going to see a Bryan Ferry concert at the Royal Albert Hall, and looking up and seeing what she assumed was one of the VIP boxes, with Anthony Price and lots of Bryan Ferry’s friends, and thinking, ‘I want to be there.’”

Which is a very American attitude. Perhaps that aspirational mentality was responsible for the first British invasion of the US charts in 20 years.

“It is very American, and I think that one of the reasons punk didn’t really click in the US in the way that it did in other parts of the world was that punk, by dint of what it was, had to be theatrical in America, pretending to be these kids who are outraged.

“I think you’re right. The more glamorous elements of British pop music in the early ’80s are so appealing to the Americans – not least because they had access to these acts on MTV – but they wanted to embrace breakfast television rather than going on there and being all grumpy and swearing. They were completely unembarrassed about being successful.”

Sweet Dreams is out now, published by Faber & Faber