Oisín Fagan: Why the Black Death holds a grim fascination for me

It was a non-political event that toppled empires, but, writing my novel set in Ireland during the plague in 1348, I realised that it cut to the core of what it means to be human 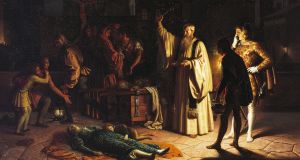 Scene of the plague in Florence in 1348 Described by Boccaccio, by Baldassarre Calamai (1787-1851), oil on canvas, 95x126cm. Photograph: DeAgostini/Getty Images

I met an anarchist historian from Dresden a little over a year ago in a restaurant in London – a very clever and unusual man in his late 70s who at the time was writing a book on the origins of Chartism, the 19th-century pro-democracy working-class movement. He asked me what I was working on, and I told him I had been writing a draft of a novel about a hot afternoon in either 1348 or 1349 or maybe even 1350; I didn’t know exactly when it was set, but it didn’t matter. I was more interested in expressing a state of collective fear and metaphysical confusion than focusing in on the particulars of a time or a place.

He nodded and asked me, “What do you make of the plague?”

And I went on my usual spiel that I did whenever anyone asked me what I was working on, most of the information and analyses poached directly from Fin Dwyer’s 2016 book 1348: A Medieval Apocalypse – the Black Death in Ireland. I told him about how the plague was a world historical event, perhaps the most important event of the last millennium after, of course, the destruction of the Amerindian civilisations during the European conquest. I told him about how perhaps as many as 40 per cent of all Europeans had died, not to speak of its Asian and African victims; how the surviving peasants found they had much more bargaining power with landowners and aristocrats than they had previously enjoyed; how women had been awarded trading licenses and property rights for the first time.

I spoke of how the Gaels were far less affected by the plague than the Normans; and how this meant that while Norman civilisation fell apart, the Gaels were able to grow in strength over the following two centuries. Then I told him that what initially attracted me most to the era was the idea of a type of proto-disaster capitalism that Dwyer had described in his own book; how certain Irish landowners had been able to use this apocalyptic scenario to increase their wealth and their holdings.

“Yes, but what do you think of the plague?” he asked.

I thought I had explained it sufficiently, or at least as much as I was able to. But then I was made to understand that when he had first asked me about the plague, he had expected some kind of judgment.

He leant towards me and waved his finger. There was a lit candle between us and it was late at night. Somebody was cutting a birthday cake at the next table, and he was slightly drunker than I was.

“You’re wrong,” he said. “It was wonderful. It was the beginning of a great flowering of humanity that has not yet reached its summit.”

Then he proceeded to speak with dazzling fluency of how the plague was the first death blow to the divine right of kings; how it all but made the French revolution inevitable nearly four centuries later; how it was the beginning of the end for the aristocracy as well, who had disgraced themselves so thoroughly during the plague that they could never again claim moral superiority over the masses; how it had loosened the bonds of serfdom and undone religious tradition, weakening the guilds and giving peasants a new knowledge of their collective power; how the huge death toll had allowed a new type of man into the institutions of learning, men whose students would create the Renaissance from which so many of our current conceptions of humanity have flowed.

After the plague, he said, they didn’t even paint people in the same way anymore. At one point I think he may have made some connection between the plague and the discovery of the Americas, though I don’t remember exactly how. It went on and on, and I am doing him a disservice in this retelling because it was a remarkably intricate analysis.

Still, what struck me most of all was the glee in his voice as he spoke of the revolutionary aftermath of the plague. This man was by no means cruel, he was actually a very good and decent person. But still, it takes a certain amount of gall to claim the plague was good.

Many understood the plague as a manifestation of the end times; they felt certain that the Kingdom of God was coming

This historian, despite the materialist understanding of history he brought to bear on his profession, had let me know that he was a type of revolutionary millennialist. He believed in a coming time of goodness when this current society we now live in would be looked back on and judged ruthlessly, having been seen to have been hopelessly corrupt and unequal.

“They will look back on us and say we were not worth saving,” he said. “Though it’s not too good to mention these things in public.”

This viewpoint he held, he told me in an illuminating moment of self-analysis, was merely a secularised version of the millennial ideals that had circulated widely during medieval Christianity, peaking around the 1340s. Many then understood the plague as a manifestation of the end times; they felt certain that the Kingdom of God was coming. Across Europe there was a huge flowering of religious devotion, accompanied by great libidinal excesses and joyous festivities.

“And were they wrong, or were they right?” he asked.

“The coming of a new world.”

The plague was a world historical event, but, of course, like everything in the past, it has its parallels in modern society

I had no idea; and I still don’t. I was dazzled by his brilliance; a little afraid of his hidden fanaticism, perhaps, but more admiring than anything else. It is always refreshing to meet someone who is animated in beliefs larger than technocracy, individualism and scientism. And it would have been useless grandstanding to take a moral position in relation to an event as seemingly remote as the plague while in a restaurant eating spaghetti. So I stayed quiet and, looking back, I now find his own unfashionable millennialism as sensible and wide-ranging as any of the more popular belief systems people currently hold.

My own relationship to the plague while writing my book, Nobber, was much more modest; it was one of grief and awe. Your immediate urge as a novelist is to draw narrative, meaning and sense out of every event, and dystopian writers, especially, are often guilty of destroying all humanity to make a political point or for amusement – the latter being far preferable, in my view. But the deeper I got into writing the book, the more I realised that my deepest fear was not that people could use an event like the plague for selfish purposes, but that the plague could happen at all, and that, happening, it might not mean anything; that it might just be pure destruction. The longer I inhabited the experience of the final moments of a person, a family, a society, the more I felt eclipsed by the huge non-meaning of it all; how it was a profoundly non-political event around which there could perhaps be no discussion or understanding. But perhaps this non-meaning I felt was just the birth pains of another type of understanding.

The plague was a world historical event, but, of course, like everything in the past, it has its parallels in modern society. Every few days a habitat is destroyed; a species of plant or animal goes extinct; a family dies in war or by accident; a disease kills a child; a language is lost; a city, a community or a way of life begins its final descent.

What distinguishes the plague, though, from any of these, is that it is an invisible event that occurs initially within the body, suspending all motion but leaving the mind entirely intact for a few hours. Then it spreads outwards through your family, then your community, always acting the exact same way. Once it has accomplished this, it uses the trade routes you have created to cross mountains and seas to destroy the world at large; but for a brief while, in grief and awe and beyond fear, you are suspended in the moments before death with a total clarity that leaves you no alternative but to contemplate. Therefore, it could be said, that the plague brings into view, collectively, the most transcendent aspects of our shared existence and consciousness. And if we were ever to discuss the coming world or what it even means to be human and alive right now, it is from here that we must surely begin.

Nobber by Oisín Fagan is published by JM Originals