Surrender by Joanna Pocock: toes the thin line between beauty and horror wonderfully

A perspective not of objectivity or voyeurism, but of participation in the web of life and in the land 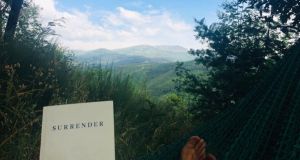 Joanna Pocock: “Was just sent this photo of Surrender in the hands of someone mentioned in the book reading it from her off-grid house in the mountains. Words winging their way back to the people who inspired them” Photograph: @Thedreamseeder

I first came to Joanna Pocock’s writing via on essay published in the Dark Mountain Project. It recounts an introductory course on the “ethical” trapping of wolves, on which Pocock enrolled, in order to try and better understand the motivations and desires of the people doing it. It haunted me, particularly these lines:

“That night I dreamt of wolves running as fast as they could through dark woods. That is what wolves do. They run and run. They cover the ground like magic.”

Pocock’s prose is understated and spare, and, like a cave painting, does perfect justice to her subject. It doesn’t debase the living world by trying to overword it. It is just a sketch, and in its gentleness touches it perfectly, like petting a flighty animal. This is nature writing that we need: standing in contrast to writing that forces the human into the picture as observer, or tries hard to pin the thing down exactly, with alienating expertise or florid description.

I was happy to find the piece again, embedded in her recently published Surrender, which came out in May with Fitzcarraldo editions in the UK, and for which she won the 2018 Fitzcarraldo Editions essay prize.

In it we follow Pocock over two years living in the town of Missoula, Montana, with her husband and their young daughter, and their eventual return to London. She charts points of personal crisis: the death of her parents and the onset of her menopause, at the same time as trying to find a place for herself in a world that is both personally and macrocosmically chaotic, navigating the corporeality of increasing climatic breakdown and ecocide, their multidinuous effects on our relationship to place.

Hoping to find an answer to the question of belonging, she meets communities that are finding ways to forge or cling to relationships with the land that they love, even as it mutates between their fingers. She is asking perhaps the most pertinent question of our anxious moment: “How I could live on the planet with sanity, if not joy?”

Pocock is ever conscious of the things we drag with us as we go seeking; the things that ride in on our backs. And she doesn’t shy away from the reckoning that is the consequence of looking closely at a world in the process of dying (or being destroyed). Because the closer attention we pay, the more we are invested in the catastrophe. Pocock is attentive to the scale of the devastation, of the wildfires that spare nothing, not even the fish, whom we might have thought safe in the water; the fish suffocate from the ash from the fires. Pocock shows us there is nothing left of the wilderness in the mythological, Thoreauvian sense. The anthropocene leaves nothing untouched.

What we have to work with then is a natural world defined by loss. An ache, with both the beauty and brutality of a bruise. And for Pocock Montana is a crucible for this, where one is faced with the scorch marks of wildfires; drought, yet vast rivers with the minimum of pollution so as to still be beautiful. Besides devastation, there are vast tracts of land and flourishing wildlife still left to fight for. Pocock toes the thin line between beauty and horror wonderfully, reminding us of our contemporary contradiction: “The interconnectedness...is palpable and yet so are the strands severed from it”.

For Pocock, the pull of the American West is the invocation of Hiraeth, a Welsh word pertaining to “the longing for a home you can’t return to or which never existed”. There is the question of feeling a relation to a place to which you have never had access, and hold no claim to. How can she find belonging here? What is that pull for someone like Pocock or myself, of suburban origins and closer proximity to the domesticated streets of a city like London?

It perhaps comes from the promise of wildness. Because despite the corruption of absolute wilderness, America still tempts with something like wildness, where the standing of humans as top of a hierarchy is sometimes primevally undone. Pocock finds significance in the possibility of being preyed on. Of being eaten by something. Of being acted upon by the world you look out at.

Which brings us again to the situatedness of Pocock’s work; the question of what emerges between observer and observed. Hers is a perspective not of objectivity or voyeurism, but of participation in the web of life and in the land and communities as she writes them. In Surrender, this undertaking is feminised. It took a women to write this book, or this particular, reciprocal type of nature writing. It stands in contrast to, as Kathleen Jamie coined it, the perspective of “the lone enraptured male”. Because the narrative is deftly intertwined with Pocock’s experience of the menopause, hers is an embodied writing. A writing that says here I am, inside a body, a changing body, in interaction with the changing world. She finds resonance between the interrupted cycles of her body and disturbances in the natural world. Her feeling of “being out of sorts”, having “something to do with the weather”:

“Bears had been spotted coming out of hibernation in Washington state and Nevada. In Juneau, Alaska, temperatures had been above freezing this past week- even at night...it seemed too late to regain anything resembling a balanced harmony in the natural world.”

Instead of resistance, in accordance with accepting the dictation of her body, likewise she must “tune into the chaos” of our unravelling life-web. She reckons instead with how to bend to shape, as a more pliable building resists the destruction of an earthquake. And most movingly, how to help her young daughter to navigate the chaos. And how to tell her the story, “the one where the planet dies at the end”, how much of the story, and when? A Lone Enraptured Male doesn’t typically have the responsibility of a child, at least not so deftly seamed into his writing.

Climate breakdown and biodiversity collapse are the inheritance of the young. It’s disorientating, for those of us coming of age at a time of collapse; an ending already, just as you are beginning. We are constantly told that the world is diminished. How do you explain the love that is there, despite it all?

Pocock introduces us to a scavenger community upholding the traditions of buffalo hunting, a transsexual rewilder living by foraging, and an “ecosexual” community reasserting a connection to the land by exploring their love for it. These are communities and individuals getting along with the act of survival, and even continuing to honour a reciprocal care ethic, refusing futility in the face of ongoing struggle. These people Pocock introduces us to are horizonal because they remind us that in places, a close relationship to land goes on, and its continuance is to us as readers, a gift of a possibility.

Pocock’s deeply humane perspective is that we can all only do the best that we can do. She refuses misanthropy, self-loathing and hopelessness, all of which she sees as an unfair dispossession of those who, like her daughter, will inherit the future. Her strongest confidence is put into the Ecosexuals, a mostly young and vibrant movement which she distinguishes from the others for “its insistence on looking forward”.

“Nostalgia is replaced by excitement for what the world could be. Who cares what it once was.”

Pocock does not offer us any benediction of hope, and she doesn’t try to posit any answers. She admits that, finding herself back in London, she is still searching for them, and doubts if she will ever fully immerse herself in the lifestyles of the communities she has learned with. But in her gracious account of them, with Surrender she hands us not a blueprint but a glimmer of a vision, of what the future could be if we make it. Not everywhere, not always, but partitally, and in places; a tentative optimism. And this is the ultimately generous effect of her book; it is affirmative of human agency for change. Like seeds that will germinate between the pavement’s cracks, this is an affirmation that is small enough not to fail.
Abi Andrews is a writer from the English Midlands. Her debut novel The Word for Woman is Wilderness was published by Serpent’s Tail in February 2018, in the US with Two Dollar Radio, and will be translated into four languages. She is working on her second novel.