Nightmare in Berlin by Hans Fallada review: adrift in a country out of control

Allan Blunden’s brilliant translation conveys the turmoil of a strange, extraordinary novel about a post-war Germany faced with the evils perpetrated under the Nazis 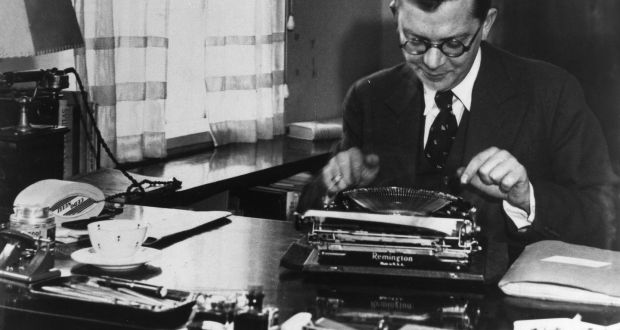 Although the war has finally ended in the late spring of 1945, its legacy continues to fester throughout the defeated Germany. Ordinary citizens search the ruins for food, or even scraps of clothing, and no one trusts anyone; a neighbour may as well be a stranger. There is no goodwill left. Formerly proud soldiers conceal their military past and deny their Nazi associations. The peace has not brought happiness.

For Dr Doll, a once-popular author, and his younger wife, the central characters in this strange, extraordinary novel at long last translated into English, there are further complications: scandal, medical conditions and a shared drug dependency which has become very serious, causing both of them to be hospitalised.

German writer Rudolf Ditzen, better known as Hans Fallada, was many things: storyteller supreme, beloved children’s author, drug addict, depressive, failed suicide, embezzler and walking time bomb. If not quite a survivor and far from a hero – unlike his younger brother Uli, who died at the front, aged 21 – Fallada was certainly a man who loved his country and never left it. He even spent a few days in the German army, but was soon deemed unfit for service. Deeply troubled, he was always haunted by guilt and, as he wrote to his mother in his final letter, “Some part of me has never been completely finished . . . with the result that I’m not a proper man, only a human being who has aged, an old grammar-school boy”.

This sense of shame, which stalked him throughout his chaotic life, sustains his vivid, urgent fiction. Nowhere is his wounded patriotism more real and despairing than in Der Alpdruck (The Nightmare), which was published in Germany in 1947, more than a year after Fallada’s death on February 5th, 1946, from heart failure following a morphine overdose. Allan Blunden’s brilliant translation conveys the horror and turmoil of the narrative which Fallada described as “a medical report.” Rather than his own health, he was referring to the wider state of the German people faced with evils perpetrated under the Nazis.

The British publisher has decided to add the “in Berlin” to the title, although “nightmare” is more than adequate. Doll exists in an ongoing bad dream. He can barely sleep, and when he does, he always imagines he is lying “at the bottom of a huge bomb crater, on his back, his arms pressed tightly against his sides, lying in the wet, yellow mud . . . and he was not alone in this abyss . . . he knew that his whole family was lying here with him, and the whole German people . . . all just as helpless and defenceless as him, all tormented by the same fears as him.”

The intense characterisation of Doll is central to the unnerving power of the narrative. In late middle age, he is facing the repercussions of a romance with a young widow. The couple are ostracised socially and experience further alienation when the Russians appoint him mayor in the town.

Doll is a study in apathy and yet, at intervals, he attempts to take action, and Fallada suggests the debilitating helplessness of physical and mental exhaustion. All the while, Doll is aware of his plight, if equally conscious of the responses of others. He appears to be a watcher, if only because he is so obviously the Fallada figure.

It seems clear that, for Fallada, who had entered a dark period in which writing had become impossible, there was a strong need to write the book that became The Nightmare (or, to use this new title, Nightmare in Berlin). It served as a catharsis of sorts, the purging of his personal story which then enabled him to write Alone in Berlin. These two final novels are very different, and readers aware of Fallada’s biography will know the circumstances. In common with Dr Doll, Fallada left Berlin for the countryside and lived with his second, and much younger, wife. As with Alma, the character in Nightmare in Berlin, the real-life Ulla Ditzen was flamboyant, confident and had a quick insult ready for anyone wishing to criticise her. She too was a drug addict.

Throughout the narrative, Doll is struck by the way people have lost all moral sense. There is no common decency. Fallada makes this all the more real because his central characters are themselves flawed, dependent on help and desperate for drugs. The picture that emerges is of a society about to consume itself. There is no pity, and as ever with Fallada, no shame.

It is a tense, atmospheric, almost dream-like novel, shifting between moods of despair and hope. It is rich in internal stories. Among the most painful is an account of an ongoing feud between Doll and a local vet, a man known to be wary of animals and whose only passion is for wine. A small incident, little more than a passing remark, develops into an ugly situation which soon involves the town.

Fallada always had a flair for balancing the personal and the public. He shows the way people attempt to remain detached while still feeding on every morsel of gossip.

Eventually, Doll and Alma decide to return to Berlin, “this beloved city where they [the couple] had both grown up – he thirty years earlier than she, it’s true – this bustling, restless place glittering with lights . . . They were going back there again to start a new life: if there was anywhere on earth where there was a chance for them . . . it was right there in Berlin, a city reduced to rubble, burnt out and bled to death.”

They think that their apartment is still there, waiting for them. The reality is very different. Yet, beneath the optimism, they seem to feel it would be easier to die in Berlin, away from the small-town gaze of people reluctant to forgive Doll for his stint as mayor. Back in Berlin, rife with black-market dealing and corrupt doctors trading in drugs, Doll is again struck by how low people must stoop in order to endure.

With Alone in Berlin, Fallada drew on a real-life drama about a couple responding to the death in action of their only son. Their postcard campaign was daring and cost them their lives. Nightmare in Berlin is Fallada’s story. Yet, ultimately, both of these late, great novels tell, as do all of his novels, the story of Germany. His subject is the ordinary man adrift in a country out of control.

In common with his near contemporary, Joseph Roth, Fallada was a natural observer. He was a great writer and a fearless reporter. He made his own mistakes and, all the while, attended closely to the wider experiences and crimes that became the story of Germany, which he loved and of which he also despaired, in bold, strident, ironic and often ambivalent fiction.