This is a fine novel, but there are problems for the reader in a book that is so introspective and yet so aloof and ironic 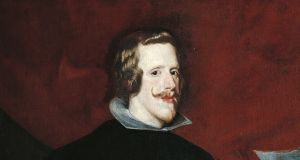 Book Title:
Painter to the King

Amy Sackville’s darkly lyrical new novel, Painter to the King, has been compared to the historical fiction of Hilary Mantel and AS Byatt. Yet for this reader, it recalls not Wolf Hall or Possession but John Fowles’s The French Lieutenant’s Woman. Published in 1969, Fowles’s novel features a knowing narrator who speaks to his present-day readers above the heads of his 19th-century characters. As in that book, the narrator of Painter to the King lives firmly in the present but has embarked on a kind of pilgrimage into the past, in this case 17th-century Spain, in order to explore the life and times of that great Baroque painter, Diego Velasquez.

However, Sackville is more daring even than Fowles. In this novel about painting – which, perforce, addresses the matter of borders, frames, the liminal, that which is seen and cannot be seen – the narrator moves fluidly, fluently, from the present into the richly imagined past, often in the course of a sentence or mere phrase.

Visiting Madrid, our narrator finds, at last, the “yellow plaque that bears the painter’s name”, but it “is fixed to a storey that wouldn’t have existed then” in a forlorn street “close to the tourist tat and tapas . . .”

Sackville uses language that is at once meticulous and rhapsodic

Feeling gauche, she takes a photo of the house, the plaque, and silently implores the painter, “Are you at home? I came calling for you . . .” Then, immediately, we are in 17th-century Madrid, following Velasquez as “He works, rests, visits friends, thinks he might become accustomed to the dry air . . .”

Such powerful evocations appear throughout this novel, as do often funny alterations of diction. Stately, lush prose is interspersed with descriptions of a chocolate-drinking character “wired from the cocoa” or the golden-haired Infanta made famous by Velasquez exclaiming “Yuck”.

Yet mainly Sackville uses language that is at once meticulous and rhapsodic to depict how the painter depicts his subject (King Philip IV, whose subject he is), in paint. The relationship between the painter and his king is the crux of this novel. Philip is melancholy by nature – today, we would probably call him depressed – but Velasquez must portray him as the Planet King, encompassing the globe with his radiance and power (royal portraitists were, perhaps, the first public relations experts; just think of Henry VIII and Holbein). Only Velasquez is too formidable a genius not to paint the man beneath the Planet King. In portrait after royal portrait, Velasquez shows the man, Philip, as he ages, absorbs much sorrow and grows exhausted within his carapace of privilege.

Sackville triumphs at describing how Baroque art was made. By the time Velázquez was painter to the King, gone were the days of Botticelli and his clean limpid lines. Painting, influenced by humanism, had become “painterly” rather than “linear”, a matter of how the eye makes shapes from light and shadow. Hence, the Secretary “takes the painter’s candle and steps closer, to take a better look. Some of the silver threads come loose. A flicker of light upon the eye turns out to be nothing more than a white paint daub. He stares at it with his own unlit eyes and then steps back until the King’s eye is an eye again.”

This is a fine novel, but there are problems for the reader in a book that is so introspective and yet so aloof and ironic. Of course, we are reading of a painter, but one can grow weary of the exhortations to “See” to “Observe”. We are told, “So, observe: the court as he observes it . . .” Or, “Observe this young man: a hand about there on the hip . . .” In another section, we are presented with scenes: “Here is a pathway into the dark gardens . . .” We are also invited by the narrator to participate in her speculations, her hazarding of guesses. “Let’s say” and “perhaps” abound: “Let’s say mid-afternoon . . .” or “Let’s say early morning – the bright haze of an early summer morning . . .” Or “So, perhaps, we might bring some light in . . .”

The narrator’s experiences in the present day are immediate and clearly presented, but Velasquez’s world is burdened by the conditional, the elliptical, with all those “perhaps’s” and “let’s say’s”. And it comes across as strangely abstract, especially considering that this is a novel about an eminently representational painter.

Siri Hustvedt, herself a splendid novelist, has reflected that, “. . . all great books are written from a position of urgency and . . . must have emotional power”. She believes also that one should write “from the inside out, not the outside in” and laments that many novelists today compose with “a wilful modernity”.

My one cavil concerning Painter to the King is that it is a bit too cool, a bit too arch in places in its use of word play, and therefore wanting in passion. Even so, this is a dense rich book – as the paintings of Velasquez are dense and rich – and well worth reading.