Ireland’s lost roads: pathways to our past

Roads less travelled: Jo Kerrigan reveals how she and her photographer husband Richard Mills tracked down a hidden Ireland for her new book, Follow The Old Road 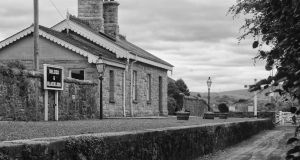 The constantly surprising thing about writing any new book is that you simply never know where it is going to take you. The last one (Old Ways, Old Secrets) was originally envisaged as a survey of traditional Irish fairy tales, but it took its own firm course and ended up as a revelation of pagan practices still very much still alive.

This new one started because of a love affair with old green tracks: you know, those faint paths you see winding up over hills, through woodlands, across headlands. Who made them, who followed them, where did they go, and why? It seemed like a good topic, and O’Brien Press thought so too. Off we go, then.

It was while following a stony track down to the coast, and discovering an ancient pier, that the idea of the sea itself as an old route became blindingly obvious. A cruise upriver from Youghal to Cappoquin on the Blackwater made it clear that rivers were certainly old roads long before land-based tracks. From there it was only a short leap to canals, and then, inevitably, to the network of lost railways that once covered the country. The Canal That Never Was, at Mallow. The quaint little Sligo-Leitrim line. Everywhere we looked, more history turned up.

This was now beginning to look like a major piece of work, involving rather a lot of travel. And by heck it did. This may be a small island, but getting around every bit of it, following the wildly indented coastline, navigating along the convolutions of winding rivers, tramping up rocky mountainsides, pushing into impenetrable woodland thickets, tracing each river, canal, railway, sea route, is not the job of a weekend. Or a month. Or a year. Especially if you factor in the weather. It is this writer’s good fortune to be married to one of Ireland’s foremost photographers, but good pictures do tend to depend on at least clear weather if not actual sunshine. In the end, the research took more than two years.

The things you discover on the way, though, are all the more wonderful because you had no idea that they existed before you stumbled on them. A 9,000-year-old settlement on a river bank. A tiny forgotten railway station in the middle of a field. Deep rope grooves under an abandoned canal bridge where straining horses had pulled the boats through. Stone steps leading up from the sea. A vast and abandoned mill which once employed thousands. A thoroughly pagan sheelah-na-gig on the wall of a ruined church. A lake reputed to be guarded by a monstrous badger. The lost kingdom of Dal Riada. Until you travel the countryside as our ancestors did, looking around instead of straight ahead, these things remain hidden.

That was what became more and more evident as we explored far and wide. It has become accepted these days that speed is admirable, and that getting from A to B in the shortest possible time is the best possible solution. Motorways good, laneways bad. Never mind the towns that have been bypassed, we can now get to Dublin in less time than before. And back again. All that time saved.

But all that experience lost.

Our grandparents walked along familiar country lanes where they could recognise every flowering bush, put a name to every bird they saw. They travelled on little local railway lines to visit friends and family, to attend a fair or gathering. Their grandparents in turn experienced floating from one side of Ireland to the other on canal boats, across hitherto undiscovered landscapes. And far further back, pilgrims and warriors, merchants and cattle drovers followed tracks, poled along rivers, cautiously followed the coastline, in pursuit of their goals. Visitors from far off lands came to Irish harbours in search of food, water, supplies, while at the same time unloading their own cargoes in exchange. Rivers like the Shannon played their part in many an invasion, the sacred Hill of Uisneach was known across the world. The pilgrim island of Lough Derg in Donegal is marked on early medieval maps. At the outer edge of Europe we might be, but we were well known.

Travel by sea makes sense when you’re an island. Up to the mid 20th century, little coastal steamers plied between our major ports and outlying settlements (islands too), bringing much-needed goods from the towns and collecting local produce in return for the city folk. The Bantry Steamship Company linked the furthest reaches of the Beara Peninsula with the railway and you can still see the little corrugated-iron hut on the quay at Glengarriff where emigrants bought their tickets for the journey which would carry them on by boat and train to Cork and Cobh. The Pollexfens of Sligo (WB Yeats’ mother was of this family) operated a service up and down the northwest coastline for goods and passengers. Every year the menfolk from poverty-stricken farming families would travel by boat across to Scotland to dig potatoes for the summer months, while their womenfolk remained at home to keep things going. Those were well-worn routes too, even though they left no trace on the seas which surround our island.

There is, hopefully, a movement back towards the slower pace, the calming rate of motion, the speed which allows us to observe and wonder, stop and regard. Greenways are being created on old railway tracks, pleasure boats are returning to the canals. Currachs, our most traditional boats, are still being made. And pilgrim paths are being rediscovered. Perhaps the breakneck progress of today’s world is in fact awakening an opposing urge to get back to simpler, slower ways.

The thing to remember is this: you may well get from A to B at maximum possible speed. But what will you have missed along the way? And what will you have lost if you don’t go back to find it? Sometimes it takes courage to step off the treadmill, abjure the rat race, if only for a day. What you get in return, though, repays you a hundredfold.
Follow the Old Road: Discover the Ireland of Yesteryear, is published by O’Brien Press