Nailing their colours to the mast 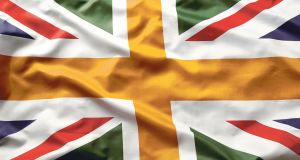 It’s complicated: ‘It would be a lovely thing, just forgetting for a minute Britishness or Irishness and just being proud to be Northern Irish,’ says Gary Lightbody of Snow Patrol

As a young boy, the Belfast pianist Barry Douglas regularly came face to face with the bewildering issue of identity. He recalls instances in south Belfast of being confronted by local hoods. “They would say, ‘Are you Protestant?’ Or they’d say, ‘Are you Catholic?’ And no matter what you answered you still got beaten up.” That was until he learned judo, as he recounts in the BBC broadcaster Mark Carruthers’s book Alternative Ulsters: Conversations on Identity.

One of the indisputable differences between artists on different sides of the Border is about this issue. Generally writers, musicians and painters from the Republic can say, “I’m Irish,” and press on with their art. In the North it’s much more intricate, as Carruthers, who was born in Derry, explores in his series of fascinating interviews with well-known figures who have a Northern Ireland background, or who live or have lived in the place.

At an Irish Times symposium in 1974 on the clash of identities, the Belfast poet John Hewitt dealt with the conundrum by saying: “I’m an Ulsterman, of planter stock. I was born in the island of Ireland, so secondarily I’m an Irishman. I was born in the British archipelago, and English is my native tongue, so I am British. The British archipelago consists of offshore islands to the continent of Europe, so I’m European.”

Ulster, Irish, British and European takes in a lot, but there’s more: the strengthening sense of Northern Irishness, for example, and even those who, from time to time, adopt the Ulster-Scots tag. Religion comes into it, as Douglas experienced, and then there are permutations of all of these identities with some solidly and singly plumping for Irish or British.

Politicians interviewed in the book, among them Ian Paisley, Gerry Adams, Peter Robinson and Martin McGuinness, provide good value on the subject, but it’s the artists who appear to struggle most with identity. Gary Lightbody of the band Snow Patrol, who comes from Bangor, Co Down, has a pithy take on the issue. “How about a united Northern Ireland?” he asks. “That would be a lovely thing, just forgetting for a minute Britishness or Irishness and just being proud to be Northern Irish.”

For most it’s not so simple. It certainly wasn’t for the late Seamus Heaney, who gave one of his last major interviews to Carruthers. Heaney, from rural Co Derry, turned down the English poet laureateship and objected to being included in The Penguin Book of Contemporary British Poetry with the well-known lines “be advised / My passport’s green / No glass of ours was ever raised / To toast the Queen”.

Heaney tells Carruthers, “I think the Northern writers, the poets of my own generation, weren’t satisfied to live in a divided society; they wanted something better. And we thought the ironies and the generosities of art would help.”

But he refers to complexities that most people on the island will understand. He tells of how nationalists refused to use the word “Ulster” because, while its geography is nine counties, many unionists viewed it as bounded by the Northern Ireland Border.

Heaney says, “At that time if I described myself as an Ulsterman I’d have thought I was selling a bit of my birthright, because I’d be subscribing to the ‘Ulster will fight and Ulster will be right’ tradition, and that was a different Ulster from the one that I was in, which was basically SDLP before the SDLP were invented.”

For several pages they work around the subject, finally ending with Carruthers asking if the term “Ulster” would make him a little uncomfortable. “It would, yes,” Heaney replies. “Irish-Ulster, Ulster-Irish. I think my identity is Ulster-Irish or Irish-Ulster, take it one way or another.”

“Either way is fine?” queries Carruthers, earning a typically elusive response: “Probably. But you would have to keep the options open.” You can almost picture that narrow glint in his eye as he says it.

His great friend Michael Longley, from south Belfast, has identity tightened down more firmly, but it is still nuanced. “Ulster is where I was brought up and the first thing it means to me is home. I see it as a very particular part of Ireland but increasingly I see Ireland as a whole,” he says.

“I would like to see myself as a pan-Irishman with an Ulster accent. Sport, in a way, brings out the true self. I wouldn’t cheer for anyone but Ulster in rugby. I wouldn’t cheer for any country other than Ireland. But Ulster means, for me, complication. If I’m abroad, the word Ulster makes me smile inwardly. I’m loyal to it because of my history.”

Ulster is also tricky for the Belfast-born poet Gerald Dawe. “Was it the old Gaelic Ulster, or was it the Ulster of the UVF? Somewhere in between these two, Ulster evaporated in my head.”

And he speaks tellingly about the phenomenon most Northern Irish visitors to the Republic have experienced: “The dead stare at dinner parties when the North comes into view and I’m banging on about this place and about how people’s attention politically and culturally still should be focused here.”

He admires Van Morrison and the late playwright Stewart Parker. “They brought to the table a different kind of reality, which is not ‘Irish’ and which is not ‘not Irish’.”

Amid such tangled self-examination, Dawe appears to settle for this: “I see myself as a Belfast man and I see Belfast as being a capital of Ireland – not the capital, but one of the capitals of Ireland.”

There is impish precision from the Dublin-born, Derry-residing writer Jennifer Johnston. Carruthers asks if she thinks “this place” has become her home. “Well, I’m in my own country. I’m in Ireland, so I’m happier than I would be if I was in another country. Sometimes I think it would be quite nice to live in the south of France, but that’s for different reasons.”

The Ballymena actor James Nesbitt brings us back to the undergrowth. “I suppose I marry Ulster and Northern Ireland really. I never once in my life said I was British, even though I’ve a British passport.”

Yeats and a rifle
Of his Protestant background, he adds, “I felt we were misunderstood. I felt that we weren’t allowed to be the ones that were cultured. I felt that we were tied with this notion of being dour, whereas the Catholics got away with having a copy of Yeats in one hand and a rifle slung over the other shoulder, you know, marching off into this kind of cultural utopia where they had right on their side.”

Another fine Ballymena actor, Liam Neeson, of Catholic background, brings identity to a new level altogether. Carruthers asks if he would settle for “Northern Irish”. “Certainly Irish-American, that’s what I am,” he responds. “And then, if I have to be specific, Northern Irish-American.”

The Enniskillen poet Frank Ormsby speaks about the “fugitive and elusive” nature of identity while raising a chuckle with, “My God, I think if you felt you had arrived at some kind of fixed sense of your own identity it would be time to think again.”

The Belfast playwright Marie Jones is happy with “Irish” or “Northern Irish”. The Belfast actor Stephen Rea says that “it’s crazy to assert your identity through a flag. It’s primitive really.”

It is indeed complicated, but perhaps it’s that confusion – not an ignoble condition as Brian Friel would say – that has helped equip Northern Ireland artists with the energy and creativity that give them their distinctive voice.

Alternative Ulsters: Conversations on Identity is published by Liberties Press