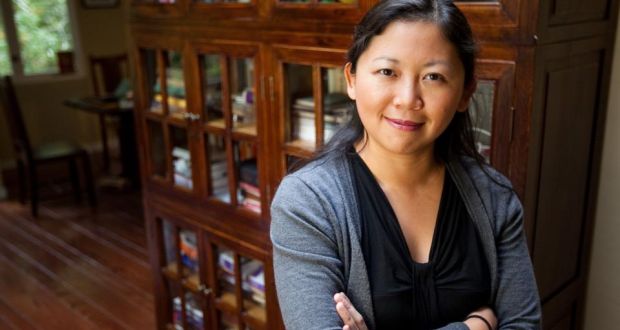 Yiyun Li: “I always used to say strongly that I was not an autobiographical writer, so strongly it was clearly suspicious.”

“The ghost of a dead person,” wrote Martin Amis in Night Train, “must divide into many ghosts – to begin with. It is labour-intensive – to begin with. Because there are many bedrooms to visit, many sleepers to stand over. Some sleepers – maybe just two or three – the dead will never leave.” A bereaved parent must, surely, lead that category, and so it is in Yiyun Li’s new novel, which consists entirely of conversations between a mother and her dead 16-year-old son. The mother is not asleep, but having these conversations “in a world unspecified in time and space. [...]It was a world made up by words, and words only. No images, no sounds.” (A book, in other words.) And because everything is reported through her thoughts, the result is more soliloquy than dialogue.

As far as we can tell, the son, whom she refers to as Nikolai (“not his real name, but a name he had given himself”), took his own life. His mother, who knows she will never come to terms with this, has her conversations with him, “holding on to my attentiveness because that was all I could do for him now” while her mind flutters with distractions. The conversations do not directly address her grief, but instead are plausible representations of a real exchange between a parent and an almost-grown child: digressive; discursive; filled with memories and private jokes.

The effect is first mesmerising and then haunting because we know these are the things Nikolai’s mother can no longer say to him, even when they seem things not notably worth saying in the first place. (It is a tale lightly told, as though fearful of smashing through the surface into the depths beneath.) This keeps the exchanges feeling open and free, with none of the oppression of a closed space that a two-hander can give; instead, we feel more and more empathy and intimacy with Nikolai and his lost mother through the book.

There are disagreements in the conversation too, and the book aptly takes its title – suggestive of the unanswerability of a child’s suicide – from Elizabeth Bishop’s poem Argument: “stretching indistinguishably / all the way, / all the way to where my reasons end”. It grows dark in places, naturally, as the central question is circled from decreasing distances. “I’ve found a perfect enemy in myself,” Nikolai tells his mother. By contrast she, protective to the end, resists saying things to him, forgetting that he is in her head anyway and can hear it all. “The dead have the advantage of the leavers,” she reflects at one such moment. “Those left behind have to have something to hold on to.”

Throughout the book, Nikolai and his mother show an interest in how their story is told: they disagree, for example, on the value of adjectives. For Nikolai, “a noun is a wall, an adjective is a window”, but for his mother, “adjectives are opinionated words. Happy, sad. Long, short. Live, dead”. And it is natural that in a writerly book like this, literature should provide solace – or at least somewhere else to look, temporarily. Those who read Li’s recent memoir Dear Friend, From My Life I Write to You in Your Life – one of the best books of its year – will recall the consolations of literature found there (including the discovery that Li is the world’s greatest living William Trevor fan).

In Where Reasons End, Nikolai’s mother wishes she could give him a collection of Wallace Stevens poems – “a mind that sees no path or direction to flee despair can be expanded nonetheless. Who can say if expansion may not one day make despair sufferable?” – and ends a chapter with Stevens’ poem This Solitude of Cataracts. She turns also to Marianne Moore – “If nothing charms us or sustains us (and we are getting food and fresh air) it is for us to say, ‘If not now, later,’ and not mope” – and an unnamed book from the Ming Dynasty, which puts its case unarguably: “If not for the frivolous, how does one manage to reach the other shore of life?”

Throughout this disquieting, delicate, affecting book the reader wonders, shamefully, “How true is this?” It’s shameful because the power of the story stands alone. When interviewed recently, Li said, “I always used to say strongly that I was not an autobiographical writer, so strongly it was clearly suspicious.” Late in the book, Nikolai tells her, “I am in fiction. I am fiction now.” So no, the book must not take its force from factors outside the text, but there is no denying either that the reader is shaken up, broken, by these terrible words of dedication, before the story even begins: In memory of Vincent Kean Li (2001-2017).