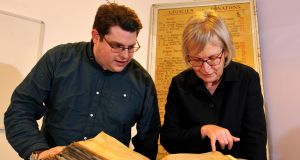 Gary Brannan and Sarah Rees Jones examine one of the archbishops’ registers. Photograph: University of York/Guardian

A team of medieval historians working in the archives at the University of York has found evidence that a nun in the 14th century faked her own death and crafted a dummy “in the likeness of her body” in order to escape her convent and pursue – in the words of the archbishop of the time – “the way of carnal lust”.

A marginal note written in Latin and buried deep within one of the 16 heavy registers used by to record the business of the archbishops of York between 1304 and 1405 first alerted archivists to the adventures of the runaway nun.

“To warn Joan of Leeds, lately nun of the house of St Clement by York, that she should return to her house,” runs the note written by archbishop William Melton and dated to 1318.

Melton, writing to inform the Dean of Beverley about the “scandalous rumour” he had heard about the arrival of the Benedictine nun Joan, claimed that Joan had “impudently cast aside the propriety of religion and the modesty of her sex”, and “out of a malicious mind simulating a bodily illness, she pretended to be dead, not dreading for the health of her soul, and with the help of numerous of her accomplices, evildoers, with malice aforethought, crafted a dummy in the likeness of her body in order to mislead the devoted faithful and she had no shame in procuring its burial in a sacred space amongst the religious of that place”.

After faking her own death, he continued, “and, in a cunning, nefarious manner . . . having turned her back on decency and the good of religion, seduced by indecency, she involved herself irreverently and perverted her path of life arrogantly to the way of carnal lust and away from poverty and obedience, and, having broken her vows and discarded the religious habit, she now wanders at large to the notorious peril to her soul and to the scandal of all of her order.”

Professor Sarah Rees Jones, principal investigator on the project, said the story of Joan’s escape, which she and her team discovered last week, was “extraordinary – like a Monty Python sketch”.

The scribes did not record whether Joan was returned to the convent or not. “Unfortunately, and this is really frustrating, we don’t know the outcome of the case,” said Rees Jones. “There are quite a lot of cases of monks and nuns who left their religious house. We don’t always get the full detail or know what the outcome was.”

A History of the County of York recounts how in 1301 a nun at the priory of St Clement named Cecily met “certain men” at the priory gate leading a saddled horse, “and, throwing off her nun’s habit, put on another robe and rode off with them to Darlington, where Gregory de Thornton was waiting for her, and with him she lived for three years or more”.

“Often it is to do with not wanting to be celibate and leaving the religious house – this applies to men as well as women – in order to have a relationship and get married,” said Rees Jones.

“Many of the people would have been committed to a religious house when they were in their teens, and then they didn’t all take to the religious life.”

Although parts of some of the archbishops’ registers have been published in the past, they were generally untranslated from Latin.

Funding of almost £1 million from the UK Arts and Humanities Research Council means the Borthwick Institute for Archive at the University of York, in partnership with the UK National Archives, is now working to translate the 16 books and make their contents available online.

During the middle ages, the parchment volumes were carried by the archbishop’s officials while he travelled. After the English civil war in the 17th century, they were stored in London and returned to York in the late 18th century.

Covering what Rees Jones calls “a fascinating and extremely turbulent period”, the volumes also span the Black Death, which ravaged Europe between 1347 and 1351.

“Being a priest was one of the most dangerous jobs in Europe during that time as they visited the sick and administered last rites at deathbeds,” said Rees Jones.

“Because so many priests had died, there weren’t enough people trained in Latin, so delivering sermons in English had to be adopted as the new status quo. The registers may shed new light on what it was like to live through this period and will perhaps give us a sense of how the church reasserted its authority after such catastrophic events.”

Using the books, Rees Jones and her team also hope to learn more about Melton, who as well as attempting to recall errant nuns would go on to lead an army of priests and citizens into battle against the Scots in 1319; as well as more about archbishop Richard le Scrope, who was executed in 1405 for taking part in the northern rising against Henry IV. – Guardian