‘Some foods are considered aphrodisiac because they resemble sexual organs’

Isabel Allende's list of aphrodisiac food is long, from oysters to figs and... turnip! 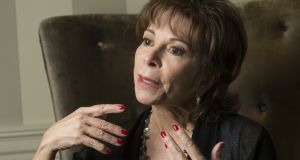 Isabel Allende: “The only truly infallible aphrodisiac”, she says, “is love”. Photograph: Nikki Kahn/ The Washington Post via Getty Images

On Valentine’s Day, it will be impossible to get a table in any of the good restaurants, as well as most of the other ones. Lovers, and those who would like to be, often opt for a meal as a romantic tête-à-tête. Eating out is clearly a popular choice, to show off, to treat each other, or simply to avoid the washing up. A meal for two is also an opportunity to share an intimate moment, excluding anyone else. Restaurants encourage this with set Valentine’s menus, sparkling wine and desserts to share. Often, the menus will not too subtly include supposedly aphrodisiac foods and drinks. Bubbly wine, chocolate and oysters are go-to items, if not to say cliché.

Romantic love, complete with hearts and turtle doves, is actually quite chaste. The term romance links back to medieval chivalry and ideas of love that remain ideal because they are never quite realised. It is a commonplace thought that everyday life, indeed the washing of dishes and other domestic chores, kills romance. Hence, the trip to the restaurant.

But while the menus may be covered in symbols of romance, the intimate table settings, aphrodisiac food, the dishes that invite to share and even feed each other, speak to another facet of human attraction: sensuality and – dare we say it at the dinner table – seduction.

Aphrodite is partly a compendium on seductive foods and practices through the ages, partly a cookbook, and partly a collection of musings, stories, and recollections from her own life. Not a manual, she insists: “I don’t know anyone who cooks or makes love from a manual.”

The book approaches the subject with a good deal of humour and pragmatism. It is addressed, Allende writes, to people “like you and me… who improvise on casseroles and bedroom romps…grateful for our remaining teeth and enormous good fortune in having somebody to embrace”. Indeed, the aphrodisiac powers of the recipes were tested on volunteers over 40 years old, “since even a cup of chamomile turns on the young”.

The list of aphrodisiac food discussed in Aphrodite is long, featuring foods of all descriptions, from beef to oysters, champagne to vegetables. There are some obvious ones – figs, asparagus, truffles – whereas others surprise: turnip? An “aphrodisiac of the poor”, apparently, because it provides excellent sustenance.

From the dairy family, cheese alone is mentioned. Perhaps fresh milk and dairy are too close to wholesomeness and innocence, while ripening cheese may remind us of the scent of our lover’s body, as well as of the sophistication needed to enjoy it. But a good helping of fresh butter or cream in a sauce or on the aforementioned turnips is a pleasure, and their liberal use has certainly given chefs like Nigella Lawson a reputation for sensuality.

The novelist’s storytelling skills makes Allende’s writing sparkle – her grandmother comes just as much alive on the pages as a tenth-century Japanese courtesan who drives her unfaithful lover wild with perfume, or Allende’s inept young stepson whom she advises before a first dinner date to buy some good takeout and focus on attentive conversation and plentiful wine instead.

Conversation, indeed, is key. Allende locates a woman’s most erogenous zone in the ear, saying that a few whispered seductive words or a story told between the sheets are “as effective as the most knowing caresses”. Her love advice boils down to a few principles: time, attention, sensuality, and above all, imagination.

We cannot resist a lover who cooks for us, she writes, as the dexterity, creativity and care with which foods are chosen and prepared indicate other hoped-for skills and sensibilities. Better yet though to share cooking as a sensual experience, and perhaps “naughtily shed a garment or two” in the the process. “Everything cooked for a lover is sensual”, she insists.

The book keeps reminding us that real attraction is not based on showing off, but on intimacy. No food is in itself a magic pill that will miraculously make us irresistible. “As for food and sex,” Allende writes, “nature demands a minimum, quite basic, for the preservation of the individual and the species, all else is ornamentation or subterfuges we invent to celebrate life.”

Rather than promising a future paradise, achieved as soon as we eat an aphrodisiac or that elusive perfect menu, Allende reminds us that we can find it here and now, by enjoying each other’s company, spending time, cooking and eating together. “The only truly infallible aphrodisiac”, she says, “is love”.
Anke Klitzing lectures at the Technological University Dublin in food culture, literature, media and communications