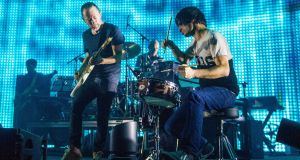 Thom Yorke, Phil Selway and Jonny Greenwood of Radiohead: Steven Hyden pitches Kid A as “an overture for the chaos and confusion of the 21st century”. Photograph: Samir Hussein/Referns

Anyone with an interest in 1960s Britpop music will know the name of Peter Frampton. As a member of The Herd, he was selected by teen magazine Rave as “the face of ’68”, but pop stardom didn’t suit him. His scream-teen fanbase dropped him like a hot potato when he co-founded boogie-rock act, Humble Pie, but when Frampton left the group to go solo little did he realise that success would go from moderate to stratospheric. The full story is shared in Do You Feel Like I Do? – A Memoir by Peter Frampton, with Alan Light (Hachette Books, £22.99), and it reads like a dream come true, albeit with a sting in the tail.

Frampton was born in Beckenham, Kent. His father was head of the art department at Bromley Technical High School where, also attending three years ahead, was David Jones (soon to be Bowie). And so began a lifelong friendship that ran in parallel for decades.

6 My first year as an ex-TD: ‘I looked for jobs, but I didn’t make the grade’

8 Mary Coughlan: ‘32 times I ended up in hospital with alcohol poisoning’

11 Ireland’s lost golf courses: What happens when the gates close?

14 Covid-19 infection rate in hospitals ‘out of control’

15 Teaching was Jerry Kiernan’s vocation; in 30 years he never missed a day

17 Cold and working from home? How to stay warm without whacking up the heating

21 David McWilliams: Why the young are priced out of the Irish economy

26 Richie Power: ‘To me, Kilkenny’s problem is at the roots’

29 Covid-19 and travel: Quarantine and increased Garda checks near Dublin airport on cards

32 Behind Her Eyes: Eve Hewson could have found star-making role in Netflix thriller

33 Remote working ‘revolution’ bringing people back to towns and villages

34 Golf club membership in Ireland: What deals are clubs offering?