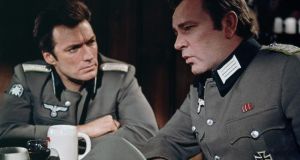 Clint Eastwood and Richard Burton on the set of “Where Eagles Dare”: “Broadsword Calling Danny Boy” manages to stay lively while talking us through the entire plot of the film. Photograph: Sunset Boulevard/Corbis

It’s the only possible title. For a generation of British men – those born between 1950 and 1970 – the words “Broadsword Calling Danny Boy” summon up poignant memories of rainy bank-holiday afternoons spent before “colour television”. Spoken by portly Richard Burton in Brian G Hutton’s Where Eagles Dare (1968), the radio call sign took a decade to register as a catchphrase. By the end of the 1970s, it had became a Rosetta Stone for any impressionist trying to perfect Burton’s sludgy vowels. In the current century, as Geoff Dyer points out in his delightful new book, the phrase was so “embedded in the national psyche” that it was used as a code during the cover-up of the phone-hacking scandal at News International.

Dyer, an unclassifiable author of essays, novels and off-centre criticism, is part of that post-war generation. He remembers Airfix models and Dad’s Army. Observing Burton and Clint Eastwood in white parkas, he notes that “one of the most prized items in my Action Man wardrobe was his ski-patrol outfit”. He was far too young to remember the war, but he gorged on the popular entertainment created by those who fought in the conflict. Prime among that pulp were the novels of Alistair MacLean and the films they generated: The Guns of Navarone, Ice Station Zebra, Where Eagles Dare. In his slim volume on Where Eagles Dare, Dyer employs the best jokes to pay tribute to the film and to an entire era. It’s a very funny book. It’s occasionally a moving one.

Dyer might admit that the volume’s very existence is something like a gag. Six years ago, in the fine Zona, he genuflected towards Andrei Tarkovsky’s sombre science-fiction masterpiece Stalker. It is hard to imagine a work more different to Where Eagles Dare. Were the two books to be placed on the same shelf, Zona might edge itself away like the possessed drinking glass at the end of the Russian film.

The author really does like Where Eagles Dare. In an afterword, he notes that it “retains an obdurate power and ageless magic”. He observes that Steven Spielberg and Anthony Lane, film critic with the New Yorker, are also fervent fans. This does not, however, stop him having endless fun with the lunatic clichés, gimcrack dialogue and absurd plot twists.

Broadsword Calling Danny Boy somehow manages to stay lively while talking us through the entire plot of the film. Burton and Eastwood play the most ruthless members of a crack team parachuted “behind enemy lines” (a phrase Dyer still relishes) to rescue a captured officer from a predictably impregnable Schloss. Or is that their true intention? After unlikely encounters with Mary Ure and Ingrid Pitt, the team gets dragged into a dizzying mess of cross and double-cross. Nothing is what seems. Little is what it should be.

Some of Dyer’s targets are well-worn, but he finds fresh routes of attack. The team’s rucksacks seem bottomless. Eastwood never tires of dragging out the phrase “we’ve got company” when danger looms. The author is particularly good on the way “flesh wounds” that would be unbearably painful in real life are shrugged off like so many stubbed toes. Always at home to the high-brow, he wrestles in references to Friedrich Nietzsche, Martha Gellhorn and the Nazi kitsch of Polish painter Piotr Uklanski.

The archness is occasionally exhausting. His odd suggestion that “until recently, the role of women in films was generally to swoon, scream, look threatened, be rescued, and, ideally, get their kit off” reads as if it’s missing a few pages of qualification. But Broadsword Danny Boy remains a delightful celebration of a martial pop culture that flourished between the Suez Crisis and the rise of Mrs Thatcher. File with your bound sets of Commando comics.

One ping after another: Why we all need a notification detox
5