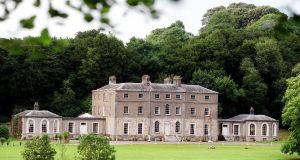 When Michael Flatley took Castle Hyde on, the building was derelict having suffered decades of neglect and decay.

Nearly 20 years ago, the entertainer Michael Flatley bought Castle Hyde in north Cork spending more than €27 million carrying out painstaking restoration which provided a lifeline for the Georgian mansion. When he took it on, the building was derelict having suffered decades of neglect and decay, but it carried a heavy weight of history. That fascinating historiography is described in Castle Hyde: The Changing Fortunes of an Irish Country House by Terence Dooley, published with a clutch of other books in the Maynooth Studies in Local History series.

Along the banks of the Blackwater, Castle Hyde near Fermoy is one of the big houses of Cork that survived both landlord decline and revolutionary changes in Irish life. Named after Arthur Hyde of Berkshire whom the queen created a knight banneret, it was later bought by Sir Henry Wrixon-Becher, a north Cork landlord. In the mid-20th century a prominent American business tycoon Henry Laughlin turned it into a guest house for 50 years.

Since taking it over, Flatley has made controversial changes such as replacing the original flight of eight entrance steps, while tensions arose over proposed alterations to the gardens and demesne. Criticism came from An Taisce which had problems with the local authorities for allowing what it called “a form of facadism”. They were reluctant to refuse people permission to carry out changes, especially if they happened to be famous and were “buying an image rather than a reality”. In 2015 the house was put on the market for sale at €20 million but failed to find a buyer.

This book devotes attention to the changes which have taken place

In the same series another country house comes under scrutiny by Clair McDonald in The Eighteenth-Century Landscape of Stradbally Hall, Co Laois, a venue best known since 2004 for its hosting of the Electric Picnic arts and music festival. This book devotes attention to the changes which have taken place in shaping the landscape from the perspective of four diverse groups: the owners, tenants, cartographers and visitors.

The Cosby family has owned Stradbally since first being granted the land in the 16th century in what was then Queen’s County. Through close study of estate leases, maps and plans of the grounds, the author pieces together the nature and role of the tenants in the landscape to create a comprehensive picture.

The Tenement Dwellers of Church Street, Dublin, 1911 by Janet Moody considers a micro-community of 132 families living in the heart of the city’s worst slums. While the lives of the Dublin upper and middle classes in the early 20th century have been documented, very little has been recorded of tenement family life in the same period.

Church Street is one of the oldest streets in the city and was first known as Great Street around 1248. In September 1913 it became notorious when two houses on the street collapsed leading to a public outcry and a subsequent report that depicted the extent of the housing crisis. The horrific child mortality rates, low levels of literacy, and the scale of which families lived in single-room dwellings are all revealed.

The women took their nickname from their distinctive traditional black shawls

For several centuries working-class Irish women survived as street traders, selling fruit, vegetables and second-hand clothing. The Shawlies: Cork’s women street traders and the ‘merchant city’, 1901-50 come under the spotlight in Susan Martin’s examination of their role. Part of an old Cork custom, the women took their nickname from their distinctive traditional black shawls and worked on the streets until well into the 20th century.

Using census information, city archives and contemporary newspaper reports, an evocative portrayal is built up of these black-clad street women, known as “onion sellers”. Some eventually were destitute, but officialdom limited their rights making survival difficult and they were effectively written out of history. Since 2010, a group “Cork Shawlies Forever” has been campaigning to have a memorial erected to the women on Coal Quay, but nothing has yet transpired.

In his book Culture, Politics and Local Government in Fingal, 1891-1914, Declan Brady considers the period from the death of Parnell to the Home Rule crisis in terms of the political elite. Fingal was then a largely rural area – far enough away from Dublin city life not to be part of it, but close enough for its spirit to inhale its politics and culture. The changing composition and conduct of local politics is examined, helping to bring about an understanding of the conditions that prevailed in the immediate years preceding the Irish revolutionary decade.

The final study, Kerry, 1600-1730: The Emergence of a British Atlantic County by Marc Caball takes a broad view of Kerry’s coastal location within the north Atlantic. The internal and external influences which shaped the county’s cultural and social fabric are explored while important strands in the Kerry story are considered through a series of specific micro-histories. All books are priced at €9.95.