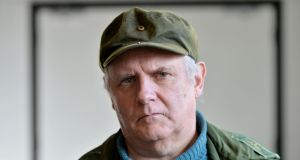 Patrick McCabe has written 11 novels before Heartland, two of which have been Booker-nominated. Photograph: Alan Betson

A group of old friends congregate in a midlands bar, seeking vengeance. They call themselves the “Killing Floor Hombres”. WW Monroe, a shady entrepreneur who gave them work, has hanged himself after two orphan boys he adopted stole his money. One of these, the narrator Ray “Ringo” Wade, seems to have betrayed his accomplice Jody at the last moment and fled; he watches concealed in the rafters as his friend is beaten, then taken out to a shed to be killed.

In novels such as The Holy City, Winterwood, and Butcher Boy, Patrick McCabe has established himself as Co Monaghan’s master of gothic. He favours talkative, ingratiating but repellent voices that lead you away from the scene of their crimes just as they root you there. In Heartland, characters talk themselves out of trauma. While waiting for a member of their group who will perform the act of killing, the Hombres anaesthetise themselves by reminiscing, arguing, monologuing and getting drunk. In a parallel narrative, Ray, now a vagrant alcoholic, unable to shed his guilt for various betrayals, keeps a journal at the recommendation of a priest. It is a confession in the classic mode. “I hope you believe me,” he says while acknowledging a certain amount of unreliability: “with my unfortunate history of alcohol abuse, [I] may well have become prone to a degree of self-delusion”. But just like those who want him dead, Ray would rather avoid the thing at hand than directly confront it.

At its best, the book can become a sort of Beckettian Reservoir Dogs

One of the many stories within stories in this book gets called “a little campfire yarn” by its teller; this describes Heartland itself. At its best, the book can become a sort of Beckettian Reservoir Dogs. Bound together by time and crime, the men in the bar start to reveal bits of themselves and their associates in one communal sinister past, which is wrought with a folkloric strain of haunting and inexplicable happening. It is hard boiled: full of menacing patter and gold teeth glinting in the moonlight.

The prose framing these monologues, though, can be as rough and ready as the characters it describes. When people shake, they shake “like a leaf”; when they prowl, they prowl “like a panther”. At the very beginning, two characters are “baby-faced” within five pages of each other. Later, a woman sings “like someone possessed”, then Jody’s boxing trainer is depicted “pummelling the air like a man possessed”, then Jody, in the ring, is seen “repeating to himself like someone possessed”, in the space of 10 pages. The one who sings like someone possessed later has sex “like someone possessed”. But then, yarns rely on the rhythm of second-hand sayings and images. The English novelist Nicola Barker has proven over a career almost as long as McCabe’s that the yarn - bristling as it is with cliche - is capable of ingenuity and sophistication on the level of work by the most elevated prose stylists.

Many well-placed moments, some of real significance, are dispelled by their being voiced

McCabe has written 11 novels before Heartland, two of which have been Booker-nominated. He’s also won this paper’s Irish Literature Prize. So it is perhaps strange that a book with so much scope for gutsy joys can feel unsatisfying. Technical mastery feels oddly lacking. “Why do you have to sing that?” says Jody, hearing a song about two orphans. We understand why this would upset him, but Ray lays the significance on thick: “it reminded him of the old days in Whiterock [orphanage]”. Following a tense chapter, Ray starts babbling about how tense he is. Many well-placed moments, some of real significance, are dispelled by their being voiced.

And considering we learn so much about the prospective killers through their bar ramblings, we are given comparatively little about the novel’s central betrayal. We know that, having been subject to different forms of abuse at their orphanage, Ray and Jody were taken in by WW Monroe, only for Jody to be conscripted into bare-knuckle boxing. But we don’t know enough about the relationship to fully explain Ray’s betrayal of WW. We know about how Ray has been dealing with his supposed betrayal of Jody, but we don’t really know why or even how he enacted this betrayal. As the book is plotty and violent, it breeds a yearning for satisfaction in two senses: both gratification of desires and comeuppance for deeds. This becomes necessary for balance; omission feels like a wrong choice – too subtle, in the end, for a larger-than-life book. And as Ray’s confession never truly becomes a confession, we are deprived of confession’s necessary complement. We have no way of deciding whether to forgive.