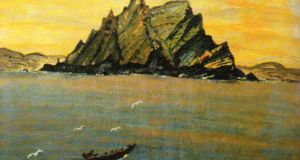 Skelligs Haul draws from a trilogy of storytelling and memoir by a Kerry farmer, who had a close engagement with marine life and birds.

A king with horse’s ears, sightings of ollphéists, or monsters, and wailing banshees are a flavour of Irish myths that never go out of fashion. The latest book on the subject Earthing the Myths: The Myths, Legends and Early History of Ireland by Daragh Smyth (Irish Academic Press, €29.95) is a county-by-county guide to sites covering the period from 800 BC to AD 650. And for good measure it includes an additional section at the end on western Scotland.

More than 1,000 locations are listed, complete with photographs and drawings, making it an important and weighty source of reference for explorers of the past. The ollphéists were mentioned by Thackeray in 1842 and were a common occurrence in Galway in the 20th century. A description of Bronach of the Burren, a banshee from Loch Rask, is quoted in colourful detail:

“Thatched with elf locks, foxy grey and rough like heather, matted and like long sea wrack, a bossy, wrinkled, ulcerated brow, the hairs of her eyebrows like fish hooks; bleared watery eyes peered with malignant fire between red inflamed lids.”

Yarnspinners have pooled their collective lore in The Anthology of Irish Folk Tales (History Press, £14.99) a fusion of fables, legends and myths, alongside some fact-based events from each county. While many are well-worn, the book serves as a reminder of popular tales such as Biddy Early of Clare or the Black Pig’s Dyke, and others such as the Battle of Widow McCormack’s Cabbage Patch in Tipperary. Put together in a beribboned collection, the old stories continue to stalk us still.

Munster folktales make up an element of a handsome anthology on the writing and painting of Michael Kirby (1905-2005) in Skelligs Haul (The Lilliput Press, €15). The book draws from a trilogy of storytelling and memoir by the Kerry farmer, who had not only a remarkable knowledge of local lore but a close engagement with marine life and birds. A fold-out map identifies Kirby Country as a large swathe of the southwest Iveragh peninsula, stretching from Cahersiveen to Caherdaniel and embracing the Skelligs.

In the introduction, Paddy Bushe quotes Michael Davitt as shrewdly invoking the term “a astraishiúlaigh” – astral traveller – to describe a man who was a custodian of the indigenous culture of Iveragh. Storytelling was a serious business and the author’s fisherman father, John Kirby, was regarded as a barometer of the weather. He had heard of a mysterious happening in his grandfather’s time and recounted it in The Tale of the Haunted Piper, an esoteric story of unseen throwing spirits causing chairs to move and delph on the dresser to dance.

Supernatural manifestations are highlighted in Away with the Fairies (€20) by William Henry whose focus is on the north Galway landscape near Castlehackett. He has chronicled the history and folklore of the county for 20 years and many of the 50 stories in his book are endemic to the Hill of Knockma, a prominent landmark near Castlehackett.

One is about the tale of the Cóiste Bodhar, a phantom coach believed to be the messenger of death. The coach driver is usually headless and the coach is often pulled by four fairy horses, also described as being headless. People travelling along the old roads became nervous at darkness and in most cases it was not because of highwaymen, but fear of an encounter with what was known as the “death” or “silent” coach.

Mythology and history collide in Keith Corcoran’s Mysteries and Legends of Donegal (€15) recounting tales of the unexpected. A rich seam of swashbuckling chronicles from 1,500 years ago up to the present is uncovered by the author, who believes there is a need to reclaim a sense of wonder and awe in offshore Atlantic islands and bays. From ghosts captured on smartphone images on Slieve League to haunted houses and the strange secrets of the Poisoned Glen at the foot of Errigal, a diverting and intriguing range of terrifying tales is uncovered.

Farther along the north coast, another take on the supernatural is explored in Lore of the Land (Causeway Coast & Glens Council, free), edited by Nicholas Wright. Drawing on the work of Sam Henry, an antiquarian, folklorist and song collector from the early decades of the 20th century, the book brings to life first-hand experiences of apparitions and of the unexplained. It delves into the worlds of shapeshifters and butter-witches, ghostly nuns, grogachs, sheogues and merrows (mermaids). The pre-eminent site of Tiveragh, a fairy hill near Cushendall, where nobody goes at night, is said to be the entrance to Tir Na nOg and strange commotions are often heard coming from there.

Ranging from the bittersweet to the humorous, folktales from the Travelling community told around the campfire at night make up a section of Why the Moon Travels (Skein Press, €12.95) by Oein DeBhairduin. In one tale, The Three Sisters and the Crow, every creature imaginable comes to a house on the shores of Lough Corrib: goats are in the hall, squirrels in the teacup and robins in the cooking pots, while frogs, rabbits, mice, pygmy shrews, hedgehogs and deer all have a walk-on part.

Memories and anecdotes are documented in Happy Days and Hard Times (National Museum of Ireland, €12) a splendid compendium compiled by Joanne Hamilton, which shines a light on the mid-20th century. Footing turf, riding on a hay float or dancing at the crossroads were part of rural life when grass and crops were hand cut by scythes and horses were used for sowing roots in a ridge. An atmospheric painting on the cover by Seán Keating shows the spartan interior of Murty Culloty’s Cottage around 1946.