The Dublin-born author’s passionate, promiscuous nature is laid bare in this well-edited collection, as are her conflicted views on Ireland, ‘island of spells, provincial pigsty’ 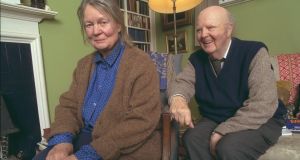 Iris Murdoch and her husband, John Bayley, Warton Professor of English at Oxford. While her imbroglios outside marriage have long been known about, these letters lay bare Murdoch’s almost desperate desires – and not only for men. Bayley remained a rock, however; and she always came home

“I should tell you that I have parted company with my virginity,” wrote 23-year-old Iris Murdoch to the soldier Frank Thompson in January 1943. She had made sure: she went on to say that “There have been two men”. How Thompson must have felt at this rather airy revelation by his “dream-girl” can only be imagined. Imagine we have to, for this collection of letters is all one-way – from Murdoch to a huge number of correspondents over a span of 60 years. Despite the silence from the other side, though, the editors’ careful contextualisation rarely leaves the reader puzzled. These one-sided conversations work.

Murdoch was born in Dublin in July 1919 into a middle-class, Irish Protestant family with northern roots. Some two months later the family moved to London where, in Iris’s words, they lived in “a perfect trinity of love”. Educated at Badminton School and Oxford University, she was successively a civil servant, a UN resettlement worker after the second World War, and an academic. She was an essayist, a reviewer, a radio commentator, a poet and a playwright. Her novels – she wrote 26 between 1954 and 1995 – principally define her, but she was also a well-regarded academic philosopher, with the philosophy acting as invisible scaffolding around the fiction. Her smart intellectual soap-operas with a hint of enchantment and fantasy fell out of fashion in the 1990s academic enthusiasms for post-this and post-that. In the era of Harry Potter and Game of Thrones, though, they may be again striking a chord.

The letters are largely allowed to speak for themselves. Murdoch’s pace is blistering even into old age, and it is sensible to stay well back. Structure is provided by a division into chronological sections. A relatively short general introduction sets out the salient facts, and assesses the critics’ responses to her work, as well as supplying an editorial primer for the subsequent letters. The editors realise that Murdoch’s over-complicated life needs a policeman as well as traffic lights; thus, context is applied by a preface to each section that maps her sometimes bewildering relationships and has qualitative comments on her writings.

Love drove her. Personal obsessions and emotional entanglements provided fuel for her fiction – Murdoch’s own life was novelish and she beat some of her plots well into the shade. Thus it is legitimate to follow these romantic trails in some detail. She had, in her own words, “an endless capacity for new loves”. Multi-sexual, her lovers are paraded through these pages. Murdoch was not conventionally pretty, but she exuded what, in another age, was called “sex appeal”. According to Josephine Hart, she disturbed the dynamics of any room she entered; likewise on paper. She had the ability to make her obscure objects of desire feel significant. “I am so grateful, when I think about it, to the people I love for being so loveable,” she wrote in 1947. The editors warn about Murdoch’s topping-and-tailing of letters. Effusive references to “Darling”, “Dear love”, “I kiss you and embrace you with much love”, “Much love to you”, “Con amore, devotissima” and so on, may signify a desired intimacy, but not necessarily a sexual one. That form of claustrophilia derived from insecurity. In her later years, this precariousness turned into “biting self-reflection”, where the letters are dealing with deaths as much as loves.

The years between 1943 and 1955 were particularly rich in a cat’s-cradle of relationships with those who would form her thought and inform her writing. Thomas Balogh, Michael Oakshott, MRD Foot, Franz Steiner, Arnaldo Momigliano, Elias Canetti (the last two married) all passed through her bed. She was engaged at least twice – in 1945 and 1952 – frightening the daylights out of one fiancé, David Hicks, who, in a letter to Iris, suggested that “Brain, will and womb, you are formidable”. Eventually, she hit upon someone who wasn’t scared to take her on. In 1956, she married John Bayley, later Warton Professor of English at Oxford. This did not particularly cramp her style. While her imbroglios outside marriage have long been known about, these letters lay bare Murdoch’s almost desperate desires – and not only for men. Liaisons with women – often disjointed and disappointing – started with Peter Honorine Ady in 1952, continued with a colleague at Oxford, Margaret Hubbard, and latterly with the novelist Brigid Brophy. In a 1964 letter to Brophy, Iris declared that she was an “austere puritan” – an assertion which does not exactly sit with her life as we know it from these letters. Philosophers are trained to circle squares, though; and it may be that she had intellectualised all the fornication into a coherent moral universe. Bayley remained a rock, however; and she always came home.

Murdoch’s Irisness is rightfully central to this collection. Her Irishness is significant, too. Elevating her social status somewhat, she was described on early dustjackets as “of Anglo-Irish parentage”. By 1978, reacting to the northern Troubles, she was “unsentimental about Ireland to the point of hatred”. Yet, in the winter of the Alzheimer’s disease that eventually claimed her mind, she was heard to say “Well I’m Irish, that’s something”. The very first letter in the volume, in 1934, is written from Kingstown, Co Dublin, and there are affectionate references elsewhere (“I’m feeling Irish and mad” (1958); Dublin as “the same magic city” (1964) she had known on childhood holidays), capturing her sense of attachment to what she called an “island of spells, provincial pigsty”. Two “Irish” novels appeared in the 1960s. The Unicorn – Ireland as a dream place – is set in the Burren. The Red and the Green, published in 1965, was a realist evocation of events surrounding the 1916 Rising, with a sympathetic nationalist tone that she later regretted.

The editors, who have sifted through thousands of letters, come to the conclusion that the woman who emerges is still maddeningly elusive – a will-o’-the-wisp. They remark on on Murdoch’s “chameleon nature” and a Protean ability to shape-shift. Murdoch’s attractiveness and presence always had the capacity to subvert the coolest and most rational of heads. If we learn anything, then, from this well-edited volume it is how Murdoch’s mysterious magic worked through the loyalties and friendships, the passions and the writing. That’s no bad place to start from in tackling the novels and the philosophy.

Ian d’Alton is an historian with interests in Irish Protestant and literary history. He wrote the entry on Iris Murdoch in the 2009 Dictionary of Irish Biography