Paul Clements explores the mudflats, callows, boglands and industrial sites that are also part of the Shannon’s story 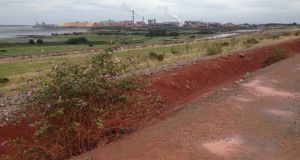 Many will be familiar with the River Shannon’s pre-eminent ecclesiastical site of Clonmacnoise and the bustling towns of Athlone and Carrick-on-Shannon, but few ever stop to explore the edgelands, the river’s in-between places, the overlooked and the marginal.

Some of the most fascinating locations where I spent time include the estuary and its unkempt mudflats, as well as the callows and boglands. In many places their atmosphere stayed with me long afterwards. The delectable smell of coumarin, or newly cut hay, is redolent of childhood, or when you crush the aromatic water mint found on the callow grasslands, a memorable sharp green minty scent percolates the air.

An austere and ambiguous place, the estuary is filled with a magical light, appreciated only by those living along it. Aughinish is an island where the worlds of industry and nature collide in startling juxtaposition within a wider west Limerick farming hinterland. The bauxite factory, which employs 450 people, exports alumina, a fine white granular powder, for processing into aluminium metal. Bauxite is a sedimentary rock and is a reddish-brown colour. On my tour of the grounds, a guide brought me up a small incline to peer at a huge rusty coloured pond of hardened earthy mud, a smaller version of the rumpled desert of Australia’s Red Centre with sprinklers moistening the dust.

The factory belches out smoke and high-pressured clouds of steam, alongside a nature reserve teeming with wildflowers, a butterfly and dragonfly sanctuary, and a haven for birds. It is noted for the diversity and quality of its semi-natural grasslands for which it has won awards, and renowned for rare flowers, such as the great burnet, a native perennial which has been protected.

In Limerick city, a river boat trip provides a different edgelands perspective. From here the industrial and architectural past comes alive: the former Bannatyne corn store looks like an abandoned castle, while the tall grey Rank grain silo, an unadorned rib-like structure of reinforced concrete, is now a protected building, known as the Leaning Tower of Limerick. At the docks, little happens these days, apart from crushing scrap metal from cars which is why it is called the “dock of the dead cars”, while the main business of the port has migrated to Foynes.

When it was completed in July 1929, Ardnacrusha was the largest hydroelectric station in the world. The ground-breaking scheme brought light to Ireland’s major towns and cities – although rural electrification was still some way off. On a hard-hat tour you can discover this absorbing history, hear the humming turbines and see the original penstocks – huge metal pipes – still operating, which can deliver 100 tons of water per second.

Wander around Victoria Lock in Co Offaly, a pocket of bucolic peace, and you will find echoes of the past in the Shannon Commissioners’ bollards or in the Commissioners’ casing for the winding gear. Edgelands enthusiasts love ruins, and nearby, the disused Clonaheenoge Canal, contains a dilapidated lock and the wooden struts of a rickety bridge, lying mildewed with broken gates. Not far from the river, along the canalside at Shannon Harbour, walk along a section of the Grand Canal Way, and you will discover corroded barges, long past their sail-by date. Some have been abandoned, left to rot in the water – an unsightly floating heritage mess which at one time was somebody’s dream.

Many Shannonside towns have suffered through lack of investment. This is especially the case with the closure of hotels in Rooskey, Banagher, Portumna and Mountshannon. In some instances, such as the fire-damaged Shannon Key West Hotel in Rooskey, the car park has been fenced off with chains and padlocks for several years. The arrival into Banagher by boat is not pretty as the crumbling Royal Shannon Hotel has been boarded up since its closure in 2005. The striking disused Georgian building with bow-fronted windows was where the novelist Anthony Trollope lived when he worked for the post office in the 1840s. Now tumbleweed sprouts from its roof, the garden is choked with dead plants, paint peels from its walls, while broken slates and smashed windows add to its pitiful condition. “When a hotel closes,” one man said, “a town dies.” It is a disgrace that such a historic hotel can be left to deteriorate with a risk of it collapsing.

No signposts lead to the edgelands but their defining characteristics may include ancient bridges, disused petrol pumps, former railway lines or power stations. Parts of the Shannon are already becoming a post-industrial landscape. The West Offaly (Shannonbridge) and Lough Ree (Lanesborough) peat-fired power stations are now being decommissioned and the sites are to be remediated by the end of 2022. A new contract with nature is being established, although it is not clear what will happen.

Wind farms are already in place on Slieve Bawn, while Lanesborough is turning into an energy town, as well as a digital hub. The turbines, once referred to by the writer Tim Robinson as “jerkily gesticulating giants”, bring an edge to the flat midlands. Soon the surrounding bogs are to be turned off and a new wilderness will be created. In an era of green energy, carbon reduction and rapid technological change, there is a fresh coming-of-age environmental approach with an ever-increasing reliance on “renewables”, with recycling to the fore.

Shannon Country: A River Journey Through Time by Paul Clements is published by The Lilliput Press (€15) and is available from bookshops or from lilliputpress.ie