Learning from the past: The power of archives 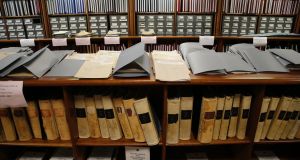 The reading room at the National Archive. Photograph: Nick Bradshaw

In Producing Knowledge, Reproducing Gender: Power, Production and Practice in Contemporary Ireland, edited by Mary Corcoran and Dr Pauline Cullen, the historian and archivist Catriona Crowe explores guilt, shame, acknowledgment and redress in the context of the institutional treatment of women and children.

She reflects on Ireland’s recent history of unprecedented disclosures relating to the country’s treatment of vulnerable women and children, across many institutions – mother and baby homes, Magdalen asylums, industrial schools and reformatories. She argues that the only way to achieve a complete picture of what happened in these places is to have full access to the archives relating to them.

Crowe makes the case that both church and State need to hugely improve access to their archives, for the sake of survivors who need personal information and for the sake of scholarship, which can help us to make sense of this extraordinary story. In this extract she shares two stories which display both the unreliable way archives have been managed and the importance of making sure archives survive.

How do we find out what happened in the past? Some people think there is a master narrative somewhere which tells the story of Ireland. I had a query once from someone looking for the piece of that narrative on Michael Collins. They assumed that it was all written down somewhere.

I had to explain that there were numerous biographies of Collins, often differing in their conclusions, and what we had in the National Archives were documents by or about him, which would have to be interrogated and understood as part of Collins’s life story, and that other repositories would have different documents, also part of the jigsaw.

This did not go down well with my caller. Indeed, the discovery that our record of the past is incomplete, sometimes difficult to read, often contradictory, often fragile, suffused with the biases of its creators, and alas, in the Irish case, largely blown to bits in 1922, is dismaying, to say the least.

I want to recount two archival stories with a bearing on these institutions, because they highlight the precariousness of vital records and how difficult it can be to ensure their survival. Poor record keeping and conservation of documents leaves us with partial or no accounts of our past. The silencing of voices from the past impacts on our capacity to understand that past and its impact on the present; and also, it mitigates against holding responsible individuals and institutions accountable for wrongdoing.

In 1983, before we had a National Archives Act to safeguard and make accessible official records, I was surveying the basements of the Department of Education in Marlborough Street, logging details of the various records to be found there, in some disarray.

I came upon a room within the basement and within it were the records of the Irish industrial school system, from its inception in the 1860s to the late 20th century. There were shelves of ledgers, bound in calfskin, each marked with the name of a school; Artane; Cappoquin; Goldenbridge; Letterfrack; Tralee; and so on – giving details of the children who resided in them, and case files, giving much more detail, on individual children.

I realised that these were really important records, both for those recorded in them and for social history, and I had no idea how to safeguard them. We had no space in the Public Record Office – as it was then – and in any case the department already had a shocking record of destruction of its records, including its entire 19th-century correspondence archive.

The person in charge of my visit to Marlborough Street was Paddy Hickey, a paperkeeper, a grade which no longer exists, but which then meant someone who retrieved and returned files from and to storage. I showed Paddy this room full of serious history and asked him what we could do to ensure its survival. Paddy said: “there is only one key to this door, and I have it. I won’t be giving it up to anyone who means harm to these records.” And he thus saved a cohort of records of inestimable value.

In 1986, the National Archives Act was passed, which threatened imprisonment or a stiff fine on anyone who destroyed official records without permission. (Up to that point, Ireland, in this as in many other sectors, operated under 19th-century legislation which the State was slow to change. Change always has cost implications.)

Some years later, I told Mary Raftery about these records, and she managed, as only she could, to get access to the administrative records which underpinned the industrial school system. The department set up a special section to deal with queries from survivors who wanted personal information regarding their stays in the schools. These records, and those held by the religious orders who ran the schools, are the main sources for survivors and their relatives seeking such information.

Something useful that the Department of Education could do now would be to transfer to the National Archives the administrative files relating to the industrial schools. These would be of immense value to scholars, in the present and the future, as they were to Mary Raftery and Eoin O’Sullivan.

The second story concerns the records of the adoption of Irish children in the United States, from mother and baby homes in Ireland. In late 1995, I heard a woman called Maggie Butler on the radio describing her search for her birth mother, having been adopted in the US in the 1950s. She was having no luck, and it appeared that her birth certificate had been falsified.

I had never really thought about the identity needs of adopted people before, but she was so eloquent that her predicament stuck in my mind. On Christmas Eve 1995, I was looking through the files from the Irish Embassy in Washington, which had just arrived and would be released to the public on January 2nd, 1996. I found a file dealing with Irish children adopted in America, which contained the names of some such children, and noted it as of possible use to people like Maggie Butler.

Then I forgot about it, but remembered again in February 1996, when I heard Maggie Butler on the radio again, still having no luck with her search. I got out the Washington file again and searched it for a reference number to a headquarters file, which might at least give more information on how the system operated.

I found such a number, went down to the third floor of the repository to where the relevant file should be, and found 1,700 case files, each referring to one child, dealing with the adoption of Irish children in the US between 1948 and 1972. You might wonder why records relating to adoption ended up in the Department of Foreign Affairs; it was because each child had to have a passport in order to travel to America.

Two things occurred to me on this discovery: first, that these files could help people like Maggie Butler who were searching for their birth mothers; second, that those same birth mothers might be living in mortal fear of someone turning up on their doorstep about whom they had told nobody.

Herein lies the dilemma of competing rights which underlies the whole adoption issue from a certain period. The Department of Foreign Affairs announced the existence of the records, with some prodding, and it became a worldwide story.

I had my first experience of taking to the airwaves (the Gay Byrne Radio Show), and in the course of a long interview, called on the State to establish a contact register, with proper counselling resources, to facilitate reunions between mothers and children, with the maximum possible success for both parties.

The records have been digitised by the Department of Foreign Affairs, and they respond to queries from both sides with as much information as they can give. The administrative files have been available to researchers in the National Archives since 1996.

The stories of mothers separated from their children, sometimes successfully reunited, sometimes not, some still searching to this day, are a living legacy of a State and church which stigmatised and degraded women pregnant outside marriage, and their children. One of the crucial ways both church and State can atone for this is to give all parties every possible assistance, particularly through access to all records affecting their lives.

These stories illustrate how carelessly, up to recently, we treated records of huge importance to the people about whom they held vital information. That is no longer the situation as regards the State’s records, but there is still cause to wonder about the religious orders.
This is an extract from Producing Knowledge, Reproducing Gender: Power, Production and Practice in Contemporary Ireland edited by Mary Corcoran, and Dr Pauline Cullen (UCD Press)