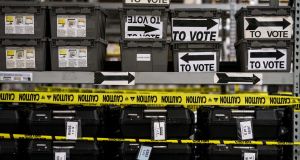 On the day after an election marred by a lack of polling machines, shelves of sequestered voting machines, wrapped with yellow caution tape, still sit unrecorded, and unused, at the Fulton County Election Preparation Center in Atlanta, Georgia in November 2018. Photograph: Melina Mara/The Washington Post via Getty Images

When I started researching democracy almost 15 years ago while writing my PhD at Trinity, many people expressed scepticism about my subject matter.

It was, after all, 2006 and the Celtic Tiger was still climbing to its final, precipitous heights. Flocks of construction cranes drifted along the Dublin skyline, and many people enjoyed a life with fewer social and economic worries than previous generations would have thought possible.

It was perhaps this surfeit of optimism that often led to a knee-jerk moment of rejection whenever I had to tell people what I was doing with my life. Why nitpick democracy? they would ask. And why here? Were we in the West not the ultimate civilisation, the end of history? What could possibly go wrong? As one department head would tell me: “Your work is completely irrelevant”.

That, as it turned out, was tempting fate.

“Nothing succeeds like excess,” Oscar Wilde claimed, but having an authority figure prematurely claim your insignificance must surely be a close second.

My PhD later became my first book on this subject, Beasts and Gods, (a bestseller at the inimitable Hodges & Figgis, I might add). That book outlined the structural flaws of electoral democracy – vote skewing, for example, and problems with political financing (including in referendums), propaganda battles, astroturf NGOs, and the technocratic, often cruel, control exercised through “independent” governing bodies and international treaties.

Many of these flaws would shortly rocket into mainstream consciousness. Beasts and Gods came out in late 2015. Within a year, Trump would win the 2016 presidential election, despite garnering nearly three million votes less than his rival Hillary Clinton; the British would vote for Brexit and then promptly spend three years cannibalising themselves over disputes on referendum spending; social media began its descent into a head-hunting war of attrition between political factions intent on permanently silencing each other; and you would now be hard-pressed to swing a cat without hitting an unpaid intern of a “charitable organization” that is serving as camouflage for the super-wealthy’s pet political projects.

This was, and is, all quite bad enough and it has rightly occupied much political debate over the past few years.

However, there has, unfortunately, been another turn of the screw in the downwards spiral of western politics and it is this: many of the same people who questioned the value of studying democracy 15 years ago, because they simply took it for granted as a system that would last forever, have suddenly reversed ferret and decided that perhaps democracy is overrated and we should, you know, just ditch it.

Overnight, I – a person who had spent an inordinate amount of time criticising the way we practice democracy and arguing for what others were pleased to term “radical change” – became one of the few remaining political writers willing to publicly defend democracy as a concept.

In particular, preserving the principle of one-person, one-vote, seems to have fallen out of favour throughout the intelligentsia, with countless books like Jason Brennan’s Against Democracy, Daniel Bell’s The China Model, and Garett Jones’s 10% Less Democracy receiving heavy promotion and bewildering accolades.

These works, and many similar ones, make jaw-dropping suggestions for the future of Western politics that are distinctly anti-democratic in nature.

Brennan, a Georgetown philosophy professor, advocates the introduction of voter knowledge tests, while Bell promotes the idea of rule by eminent persons. According to the Canadian political scientist, it is a “sad fact” that “citizens in electoral democracies won’t even question their right to choose their political leaders”.

Similarly, in the much celebrated Democracy for Realists, Profs Christopher Achen and Larry Bartels (Princeton and Vanderbilt respectively) claim that people change their votes over events as seemingly irrelevant as shark attacks because they are unable to “distinguish the effects of shark attacks and droughts from the effects of tax policies and foreign wars”. Humans, they claim, are thus too irrational for democracy as we know it.

Fortunately, claims such as these are based on deeply flawed reasoning and an elastic, often highly selective, approach to data. Debunking them is the reason I wrote my most recent book In Defence of Democracy.

And because I have the kind of parents (and, as it transpired, the kind of editor) who don’t let you complain about anything unless you also have a solution, a thought-out re-design of the political system has also been included in this brief book.

It is, I hope, if nothing else, the most irreverently entertaining book about democracy that you are ever likely to clap eyes on. If you’ve ever thought that the insights of Dr Seuss or The Hitchhiker’s Guide to the Galaxy should feature more prominently in political theory, this one’s for you.

That being said, there is something deeply serious about the fact that for many of what Achen and Bartels term “the respectable elite” the problem with democracy is democracy – in other words, people participating in politics and exercising their hard-won self-determination. More concerning still is that debating how exactly to curtail this freedom has now become fashionable.

I still believe that the way we practice democracy needs to be altered – but to include more people in truly equal and meaningful ways (through frequent citizen-initiated referenda or participatory budgeting, for example) not marginalise them further.

Most of the pressing structural problems we are facing today – tax evasion, housing crises, tech cartels and inequality in health and education – were not created by ordinary people, and those people are therefore understandably angry that they must often pay the price for decisions they had little input into. How we react to that anger, via a short-sighted reactionary clampdown or by opening up and re-thinking our processes, will determine our future.

Dr Roslyn Fuller trained in law before writing her PhD in democracy and international law at Trinity College. She frequently writes and lectures on issues pertaining to technology, ancient and modern democracy, privacy and international law, with her work appearing in the Los Angeles Review of Books, the Financial Times, BBC, the Nation, and Forbes. She is the author of five books, including Beasts and Gods: How Democracy Changed Its Meaning and Lost Its Purpose and In Defence of Democracy, recently a finalist in the Next Generation Indie Book Awards