JK Rowling’s friend Robert Galbraith has something to say

I’ve incorporated mystery in all my novels. The Potters were whodunits, whydunits and howdidits 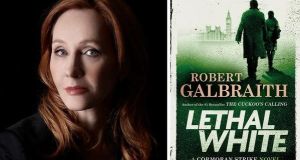 Lethal White required a spreadsheet that was more complicated than any I’ve created before. It had nine columns, red text for red herrings, blue text for clues, and various colours for different suspects and themes

Lethal White, the fourth volume in Robert Galbraith’s hugely popular Cormoran Strike mystery series, went on sale yesterday. But who, exactly, is Robert Galbraith? The British author has never appeared at a bookstore event; you won’t find his photo on the books’ jackets. What little we know about Galbraith comes from his good friend JK Rowling, who has talked about him on Twitter – and from his own website, which details his military background. But until now, the reclusive author has been shy about granting interviews.

Q: Can you talk about your previous career? I understand you may have had some sort of top-secret clearance. You may not be able to be specific, but even a broad-brush portrait would be helpful.
A: I previously worked in the plainclothes SIB (Special Investigation Branch) of the Military Police. After leaving the army and while writing my first novel, I worked in the world of private security, which explained my initial reluctance to be photographed, interviewed or take meetings, lest my uncanny resemblance to JK Rowling be noticed.

An ex-military friend of mine was ready to go to my publishers to shake hands as Robert, because most people at Little, Brown didn’t know who I really was. However, Robert was unmasked before that happened, somewhat to my friend’s relief.

Q: What brought you to writing crime novels?
A: I always wanted to write classic whodunits in a contemporary setting. What I love about the genre is that the central puzzle can be clothed a million different ways. There’s also something mythic about a lone detective or a duo, righters of wrongs, imposers of order on chaos. I think I’ve incorporated an element of mystery in all my novels. The Potters were variously whodunits, whydunits and howdidits.

Q: You bestow such vivid, unusual names – Cormoran Strike, Leonora Quine, Lula Landry, Daniel Chard, “Digger” Malley – on your characters. What is the process you go through when you’re trying to decide what to call someone? How, for example, did you come up with Cormoran Strike’s name?
A: I wanted Strike to have an odd name because his dead mother was a flamboyant, unconventional character who had only herself to please when it came to christening him. She returned to her family in Cornwall to give birth and I thought it would be like her to fix on a Cornish name, a quixotic and almost paradoxical choice given how much she wanted to escape her backwater roots. If she’d waited a week or so he might have been Elvis, but I think she was feeling momentarily sentimental about home.

Cormoran was the name of a giant who reputedly lived on St Michael’s Mount. I liked it for many reasons: partly because the character is a big and somewhat ungainly man, partly because it’s the sort of name people would constantly get wrong, which fed into Strike’s constant, dogged battle in life to be his own person and free himself from the burden of his infamous parents. As for Strike, that happened quite fortuitously. I wanted a one-syllable name because Cormoran is quite long enough and looking through an old book about Cornish customs I noticed that a contributor had the surname Strike. It isn’t a Cornish name, but that was exactly what I wanted, because he doesn’t really belong anywhere.

I’m very interested in the power of names and naming and I can’t really get to grips with characters until I’ve settled on their name. This is the first time I’ve given a lead character a really strange moniker.

The fact that Strike also has so many nicknames is revealing of him as a person. A lot of people think they’re close to him, but how many people would he describe as close friends? He makes friends easily, but he’s essentially solitary and self-contained.

Q: What authors – and, specifically, what books – have shaped you as a writer?
A: I struggle to answer this because I think you’re shaped by literally everything you read when you’re young, and as my mother filled the house with books, my taste was catholic to say the least. I read everyone from Georgette Heyer to Ian Fleming to Dodie Smith to William Thackeray. I loved Wodehouse and Waugh, Katherine Mansfield and Colette. All of them taught me different ways to create a world populated by living, breathing characters, so that the reader never notices the pasteboard, the strings and levers.

Q: Music is threaded through the novels (we know, for example, that Strike’s dad is a famous rock star; Blue Öyster Cult songs figure in the plot of Career of Evil). If you were to give me a playlist to listen to while I read Lethal White what would be on it?
A: There are eight songs or pieces of music mentioned in the novel that should be on the playlist: Cutt Off by Kasabian, No Woman, No Cry by Bob Marley, Wherever You Will Go by The Calling, Rihanna’s Where Have you Been, Ni**as In Paris by Kanye West and Jay-Z and Oliver Twist by D’Banj, Black Trombone by Serge Gainsbourg and Brahms’ Symphony No. 1, C Minor.

I’d add So Long Marianne by Leonard Cohen for Strike and Charlotte, Heroes by David Bowie for the Olympic backdrop and White Horses by Andrea Ross, not only for the book’s leitmotif, but for Robin, and a romantic, innocent girl’s idea of adventure and freedom.

Q: Some mystery writers are plotters; they outline, they plan, they know exactly where their stories are going. Others are known as “pantsers” (as in writing by the seats of their pants – sitting down every day and just going where the story takes them). Are you a plotter or a pantser?
A: I’m definitely a planner. Lethal White required a spreadsheet that was more complicated than any I’ve created before. It had nine columns, red text for red herrings, blue text for clues, and various colours for different suspects and themes. Before I start each Strike book, I know exactly who did it, why they did it and how they did it.

When I hear pantsers describing the way they work I feel a mixture of admiration and anxiety. I did an event with Stephen King and John Irving a few years back and Stephen described his process as following a thread to see where it leads. When it came to John’s turn, he said he always knew damn well where the thread led before he started following it. I’m somewhere between the two. The initial inspiration may be one simple idea with no start or finish, but I never start writing a book unless I know exactly where I’m heading.