The Letters of Oliver Goldsmith review 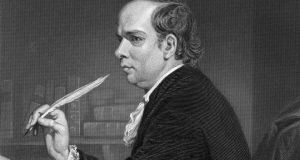 Oliver Goldsmith’s letters show him to be an acute observer of people and manners. Photograph: Engraving by Alonzo Chappel/Hulton Archive/Getty Images

Lines and phrases from Oliver Goldsmith’s long poem, The Deserted Village, were known to generations of Irish school children: “Sweet Auburn, loveliest village of the plain”, “ill fares the land”; fences skirted by furze “unprofitably gay”; a famine-struck country that “blooms-a garden, and a grave”. The poem’s evocation of a changing world and its testament to rural depopulation must have resonated deeply in classrooms from the 1920s on. Just as Goldsmith’s famous poem calls up a world of people and places now gone, so this new collection of his correspondence offers us glimpses into a vanished social and cultural world. The editors, Michael Griffin and David O’Shaugnessy, have undertaken considerable original research in updating and adding to Katharine Balderston’s 1928 Cambridge University Press collection of Goldsmith letters. Like Balderston before them, Griffin and O’Shaugnessy confront a slender body of surviving letters but build a fascinating story from what remains.

Born in the late 1720s at Pallas, Co Longford, Goldsmith was educated in Lissoy, Elphin and Edgeworthstown. Under the tutelage of talented schoolmasters and tutors, Goldsmith flourished and began to build up the store of classical and European (especially French) knowledge that would sustain his successful writing career. When his sister contracted an expensive marriage that dimmed Goldsmith’s own prospects, he went to Trinity College Dublin as a low-ranking student who paid his way by doing menial tasks.

There are no letters from this TCD time but Griffin and O’Shaughnessy piece together the story of these early years. We see Goldsmith moving back and forth between Dublin and the midlands (with a brief failed foray to Cork from where he had planned to emigrate to America). When Goldsmith moved on again it was to Edinburgh, from where he wrote letters describing a lonely student life. Full of pathos, these early letters are among the most moving in the book. Goldsmith rails against his own laziness (“An hereditary indolence” inherited from “the Mother’s side”) while offering earnest descriptions of the new people and places he sees. Inevitably there are comparisons with Ireland, as when he assures his brother-in-law that Scottish gentlemen are “much better bred” than their rakish, boorish, fox-hunting Irish equivalents. Goldsmith’s skill as a writer who sketches a social and cultural canvas with a broad comparative sweep is already in evidence and the letters as a whole show him to be an acute observer of people and manners.

Having made some progress in the study of anatomy, Goldsmith went to Bordeaux and on to Rotterdam and Leiden, later travelling to Paris and through France, Switzerland and Italy. A letter to his uncle, the Rev Thomas Contarine, sets out his planned travels while later letters to the same relative (who part-funded Goldsmith’s study) rather dutifully describe “the face of the country”. With his arrival in London in February 1757, Goldsmith’s letters begin to tell their own story: that of the emergence of the professional man of letters, working between and across many forms of writing and publishing, coming to know all aspects of London literary life from starving in a garret to dining with Edmund Burke and Joshua Reynolds.

In these London letters, Goldsmith returns to what he calls his “unaccountable” fondness for Ireland. Writing to his brother-in-law Daniel Hodson, he wonders “what gives me a wish to see Ireland again?” The answer is not to be found in the “country” itself nor in the bawdy gatherings that pass for Irish “company”. Rather, it is particular places and people – “the little mount before Lishoy gate”; “you, my dear friend” – that draw him back, at least in memory.

Goldsmith was never to return to Ireland, but he remained an Irish writer in London. His first letter from London is written from the Temple Exchange Coffee House, a sociable place where the editors tell us Goldsmith would have mixed with Irish law students. Such careful attention to Irish networks in London is an especially rewarding feature of this edition. Building on Griffin’s earlier excellent study (Enlightenment in Ruins) and O’Shaughnessy’s research into Irish dramatists in London, the editors sketch out the contours of an Irish London. The last letter in the volume is a short reply to the Irish playwright Isaac Jackman, in response to a likely request for help from the younger man, who sought to establish himself on the London theatre scene.

Although there are only 66 letters surviving and sometimes a need for editorial speculation regarding the contents of damaged manuscripts, this is a full and rewarding study. From Goldsmith’s account of the “ill-naturd corn I have got on my Toe” while walking in the Highlands to his later hurried correspondence as the star playwright of She Stoops to Conquer, the letters guide us towards a fuller understanding of the life and writings of one of Ireland’s most talented authors.