Book Club: ‘The important things happened long ago and what remains in the present of her stories is to understand and judge’ 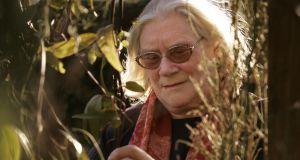 Jennifer Johnston: her characters typically live with little sense of agency, haunted by the actions of those who have gone before. Photograph: Dara Mac Dónaill

“I don’t care about the big issues,” Jennifer Johnston commented in the Belfast magazine Fortnight in 1995. “What I care about is how we manage to live with the big issues going on around us and how we manage to face ourselves.” Johnston’s fiction exemplifies this stance, speaking sensitively to the difficulties which ensue when people try to live truthfully in the world. Over and again, Johnston places characters in situations of extreme stress, struggling before the pressures to survive, to conform, or simply to be.

The situations described are various, and the canvas is suitably diverse: from the horrors of the Somme and Gallipoli (How Many Miles to Babylon? [1974], This is Not a Novel [2002]), to Big House communities in the early 1920s (The Old Jest [1979], Fool’s Sanctuary [1987]); and from divided communities during the Troubles (Shadows on our Skin [1977], The Railway Station Man [1984]), to cultures of secrecy and abuse in contemporary society (The Invisible Worm [1991], Grace and Truth [2005]). Johnston’s fiction is important less for its engagement with these “big issues”, however, than for its reading of the political through the mundane, as it prioritises the impact of such issues on domestic relations and individual lives.

Although her canvas is large, Johnston paints in miniature. Each of her 19 novels is elegantly concise, comprising a tightly-defined plot, a limited palette of ideas, very few characters and an uncluttered syntax

Although her canvas is large, Johnston paints in miniature. Each of her 19 novels is elegantly concise, comprising a tightly-defined plot, a limited palette of ideas, a cast of very few characters, and an uncluttered syntax. An additional feature of her work is that it often makes use of a preferred compositional structure, interleaving first-person accounts (diaries, letters, documents, personal memories) with extended third-person narratives. Her novels consequently shift between perspective, time and tense, foregrounding key issues through form as well as narrative, and gradually working towards the disclosure of a long-held secret.

“The important things have happened long ago,” Richard York noted a few years ago, in an astute assessment of Johnston’s oeuvre, “and what remains in the present of her stories is contemplation, the search to understand and judge, and the wish to decide what the past can mean to the present.” The results are frequently harrowing, leaving characters with a tenuous grasp of reality and a fragile sense of self-worth. “I am not sure in which tense I live, the present or the past,” Laura confesses, in one of Johnston’s finest works, The Invisible Worm, as she struggles to come to terms with the fact that she was raped by her father as a child, burdened with the memory that her mother failed her when confronted with this terrible knowledge. “Both seem irreconcilably intermingled in my mind.”

Like many of Johnston’s other works, The Invisible Worm is a claustrophobic and deeply interiorised text, with the structure of the novel turning in on itself and only slowly bringing its secrets to light. As it does this, the narrative moves forward in psychological rather than chronological time, with the central characters, Laura and her friend Dominic, gradually finding space to speak of their innermost fears and anxieties. “We need to know how to forgive as well as to be forgiven,” Laura explains, if she is to escape the ghost of her father. Dominic similarly realises that “I believe we can be healed”, as he nurses his own hurt and attempts to deal with the consequences of stifling parental ambition.

In Johnston’s work, such statements are always hard won. Her characters typically live with little sense of agency, haunted by the actions of those who have gone before. “We echo and re-echo down the years,” Imogen reflects in the exquisite This is Not a Novel, as she reads into the secrets of the past, uncovering uncanny links between different generations of her family. Initially, these links seem sustaining: “I love the feeling of continuity,” Imogen remarks, “of having been planted somewhere in the past”, when she first considers her resemblance to her great-grandmother. However, the legacy becomes suffocating as Imogen begins to inhabit her ancestor’s aphasia, reliving her great-grandmother’s grief, and mourning young men who died at different points in time (her granduncle, Harry, and also her own brother, Johnny). “Are we all condemned to be infected by our past?”, Imogen’s father is left to ask, in private, as he anguishes over his daughter’s mental health.

As the past is repeated across Johnston’s oeuvre, certain patterns gain in definition. “Echoes. Echoes hurt my eyes,” Laura says with some ambiguity in The Invisible Worm. It is but one of many references to the motif of the echo which, in many respects, is central to Johnston’s aesthetic. “Echoes shadow all of Johnston’s work,” Ann Owens Weekes has observed; and, at one level, “Johnston uses echoes to evoke characteristic mental states and preoccupations”. Sometimes these echoes gain in intensity as characters appear trapped within ever-expanding cycles of pain and violence. As Joe’s mother says with great economy in Shadows on our Skin: “Nothing ever changes. It only gets worse.” In other instances, however, echoes seem to fade as the ripples spread across time.

Johnston deploys echoes as resonant structuring devices in her work, drawing upon fragments of texts (echoes of songs, poems, nursery rhymes, etc.), and repeating them chorus-like through the course of her narratives. Specific images also reverberate through her novels, gaining in significance as they take hold of her narrators’ imaginations, and indicating the depth to which her characters have been hurt and the extent to which they obsessively ruminate. The swans in How Many Miles to Babylon? are a case in point, providing Alec with the context for a highly-stylised recollection of his mother but also an intimate memory of Jerry, all the while indicating a world of grace and beauty which ended with the first World War.

Alec is like many of Johnston’s other protagonists, who are also embryo artists, and who share an interest in the power – but also the shortcomings – of language

The fact that the swans carry an explicit Yeatsian echo – and that a copy of Yeats’s early poems is one of the few items Alec takes with him to the Front – adds a further layer of significance to this seemingly simple image, reminding the reader that Alec is a would-be writer, with a poetic sensibility and an aptitude for metonym and allusion. In this respect, although Alec is very much alone, he is nonetheless like many of Johnston’s other protagonists, who are also embryo artists, and who share an interest in the power – but also the shortcomings – of language.

“Out of this window I see the night white and empty,” Laura concludes The Invisible Worm. “Like my future – an empty page on which I will begin to write my life. I will try to embellish the emptiness of living. Perhaps I may come alive.” Laura’s turn towards writing is repeated in a number of Johnston’s other works. It is characteristic that this turn is belated, and that its fruits remain unrealised; it is equally appropriate, though, that the decision can be made, as it allows for the possibility of self-expression, even regeneration, in a cruel and seemingly senseless world. “Perhaps I may come alive”: this is no small success in the circumstances, and testifies to Johnston’s achievements as a prose writer.
Prof Paul Delaney is Lecturer in Irish Writing in English at Trinity College Dublin. His works include Seán O’Faoláin: Literature, Inheritance and the 1930s (Irish Academic Press)