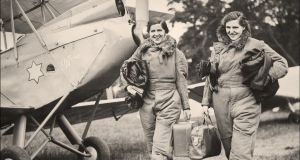 Sisters Mabel and Sheila Glass from Co Antrim took part in air races throughout England and also an endurance competition in Egypt in 1937. Mabel flew approximately 900 RAF aircraft while serving with the Air Transport Auxiliary during the second World War.

From gentle flights by balloon to high-speed, adrenaline-packed air races, the Irish women in Petticoat Pilots did it all. They competed in flying competitions throughout Europe, Africa and America. They grabbed newspaper headlines when they completed long-distance solo endurance flights. They established world records in other aviation spheres.

They were honoured with titles. Their backgrounds ranged from poverty to aristocracy but they associated and mingled with royals, nobles and socialites in the aviation heyday of the 1920s and 1930s.

Sadly, however, history has largely forgotten these women. These two volumes give them their rightful place among Irish achievers of the early 20th century.

The book contains the biographies of more than a dozen Irishwomen who were at the cutting edge of the aeronautical revolution that swept these islands in the early 20th century. Their stories are told against the backdrop of Irish economic, social and political life. Some enjoyed a lavish and aristocratic lifestyle, while others struggled to support themselves. They hailed from the four provinces of Ireland. Some were contemporaries and acquaintances of other prominent aviatrices of the period, Amelia Earhart and Amy Johnson to name two.

The first of the two volumes contain biographies of five Irishwomen:

Meath-born Violet Lambart married into the wealthy Belfast Dunville whiskey family and took an interest in the Edwardian sport of balloon racing throughout Europe in the early years of the 20th century.

Lilian Bland witnessed the achievements of some early aviators with their flimsy machines in England in 1909. She returned to Co Antrim and became the first woman in the world to design, construct and fly her own aeroplane.

Limerick native Sophie Pierce travelled to London to earn her Aviator’s Certificate and attracted worldwide acclaim when she became the first woman to fly solo from Cape Town to London. She went to America and embarked on a successful aeronautical tour.

Cork woman Sicele O’Brien learned to fly in London in 1926. She promoted aviation throughout England and Ireland by organising aeronautical events. She took part in several air races but tragically became the first Irishwoman to be killed in a flying accident.

Mary Westenra from Monaghan married a wealthy gold-mine owner. When her five children were at boarding school she began to take flying lessons. She became the first woman to fly from London down the east side of the African continent and return by a western route. She earned a royal title for her contribution to aviation and became Champion Airwoman of the World.

The seven chapters in the second volume contain the biographies of an additional seven Irish female aviators.

Adelaide Pollock married into the wealthy Belfast Cleaver family. In 1929 she bought her own open-cockpit aircraft and undertook a return journey to India. This was followed by a transcontinental flight from New York to California.

Cathleen Bryan hailed from Wexford and operated a flying school and commercial aviation business in north Co Dublin. She gave aeronautical experience to many and thus brought aviation to hundreds of Irish people.

Margaret, Helen and Mairi Stewart, three of the daughters of Lord Londonderry from Co Down, learned to fly and frequently flew between their family properties in the UK.

Sisters Mabel and Sheila Glass from Co Antrim took part in air races throughout England and also an endurance competition in Egypt in 1937. Mabel Glass flew approximately 900 RAF aircraft while serving with the Air Transport Auxiliary during the Second World War.

Cork-born Ruth Hallinan helped establish the Cork Aero Club and was instrumental in generating interest in aviation in Munster.

Nancy Corrigan emigrated from poverty-stricken Achill when she was 16 years old. She became a model in New York and went on to instruct US Air Force cadets during the second World War. She competed in a high-speed all-women air race in Cleveland.

The 773 images in these two volumes give an insight into the lives of these women. Many photographs are from private family albums not in the public domain previously.

President Michael D Higgins wrote in his foreword: “This book, Petticoat Pilots, is a unique collector’s treasure-trove, not just for historians or scholars of Irish aviation, but for all those Irishwomen and Irishmen at home and around the world who wish to learn and celebrate the undeniable world-class, but too often unsung, achievements of the women whose stories are told within it.

“The volume of research underpinning this book, conducted over a seven-year period, and the level of detail that has been provided, including some 773 beautifully reprinted historical images, is truly remarkable. I congratulate Michael Traynor for this tour de force. It is undoubtedly the ultimate reference source on the topic of women’s aviation history in Ireland, and will surely become internationally recognised as a foremost title on the subject.”
Additional information about the book, along with the stockists, can be viewed at petticoatpilots.com