Give them enough rope: How flax saved Ireland’s bacon during second World War 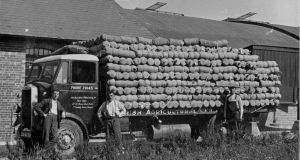 A lorry laden with twine at Irish Ropes’ factory

Ireland’s decision to remain neutral at the start of the second World War led to a drive for self-sufficiency.

In October 1939, five weeks after its declaration of a state of emergency, the government announced its first compulsory tillage order. It required farmers to turn over an eighth of their land to the growing of cereals and crops. By 1944 this had been increased in stages to three-eighths. For Ireland’s leading rope manufacturer it meant tripling its annual production of agricultural twine from 700 tons to more than 2,000 tons.

Irish Ropes, which would later become famous around the world for its Red Setter twine and Tintawn carpets, had only started production six years earlier. It was established in 1933 in a derelict former British cavalry barracks in Newbridge, Co Kildare by Eric Rigby-Jones, a ropemaker from Liverpool, with the active support of the Irish government. Within four years it was making nearly all of Ireland’s rope and twine, using sisal, a vegetable fibre from British East Africa that was shipped to Ireland through British ports.

Faced with the new wartime threat to shipping and increased demand from farmers Eric’s first priority was to get hold of as much sisal as he could. By the end of 1940, however, after the German occupation of France, the Battle of Britain, the Blitz and the Battle of the Atlantic, the British government had become exasperated by Ireland’s continued refusal to abandon its neutrality. It introduced a trade embargo – first as a short, sharp shock to try to drive de Valera from office and then, when that failed, as a matter of principle.

In the spring of 1941, while Eric was in Britain to assess the situation for himself, the British Hemp Controller banned all further exports of sisal to Ireland. Fortunately Eric’s stockpiling meant that, in spite of a major fire at the factory the previous autumn, he still had enough for the 1941 harvest.

With his stocks then likely to be exhausted, he introduced a wide range of emergency measures and tried with limited success to source sisal from elsewhere. Not only was it prohibitively expensive but it was also almost impossible to find any shipping space. Things only got worse after the Japanese attack on Pearl Harbor at the end of the year. Japan’s subsequent occupation of the Philippines cut off the world’s supply of manila, the other main fibre used in ropemaking.

The allies now sought to control all supplies of raw materials through their new Combined Raw Materials Board in Washington. Heading its first list of commodities in short supply were rubber, tin, manila and sisal.

The following spring, at the government’s prompting, Eric turned in desperation to Ireland’s only indigenous fibre, flax. Although he never thought it a realistic alternative – it would cause significant manufacturing problems and require almost every mechanical binder in the country to be adjusted – he had run out of options. After erecting new gates at the factory Eric wrote to his children at school in England that “if we do come to an end we shall at least go down with our colours flying”.

He soon discovered that, as well as it being several times more expensive than sisal, there was no flax left for him to buy. He determined instead to grow his own. By the end of May he had arranged for farmers in nearby Carlow to grow 1,000 acres for him under his so-called Tullow Flax Scheme. Irish Ropes’ staff would help with the harvest, which would then be scutched at the factory in Newbridge. Eric expected to get only 300 tons of usable fibre.

Before harvesting his crop he made an unsuccessful approach to the British Ministry of Supply to try to swap his flax for sisal. Flax would, however, turn out to be his and Ireland’s salvation. The war had created a resurgence in demand for a fibre who cultivation had been in long-term decline. Britain’s wartime Flax Controller later listed some of its uses. His list included 54 million square yards of aeroplane fabric, 25 million square yards of heavy naval canvas, 26,000 miles of hosepipe, and 20,000 miles of parachute harness.

At the outbreak of war the British government had moved quickly to secure all the flax that it could. This included contracting to buy all of Ireland’s flax crop in 1939 and 1940 and encouraging Irish farmers to increase their cultivation by doubling the prices that it offered. Cultivation, which had fallen to less than 4,000 acres in 1938, would exceed 30,000 acres by the end of the war.

When discussions opened on extending the contract in the summer of 1942 the Irish made it clear that, unless they received adequate supplies of sisal, they might have to withhold all their flax crop to make twine. It was a totally unrealistic proposition, as Eric knew only too well, but a masterly negotiating gambit.

Within six weeks the British had agreed to provide Irish Ropes with 2,000 tons of fibre and twine in 1943 in return for an Irish commitment to increase its flax cultivation to 30,000 acres and sell it all to Britain. An Irish civil servant later suggested that Ireland was probably the only country in the world to receive its full allocation of sisal that year.

This arrangement continued, with only minor amendments, until the end of the war. The British deputy prime minister, Clement Attlee, who chaired the cabinet’s Committee on Economic Policy Towards Eire that approved the deal, had quickly realised that trade embargoes were an ineffective way of securing political concessions. On becoming chairman in 1942 he decided that his committee’s future policy should be based solely on economic self-interest.
The story of Irish Ropes’ wartime cultivation of flax is told in more detail in John Rigby-Jones’ book, Tintawn and Binder Twine: the Story of Eric Rigby-Jones and Irish Ropes, published by Fonthill Media.