Her musings have a weary resignation, at odds with a writer who lived a swashbuckling life 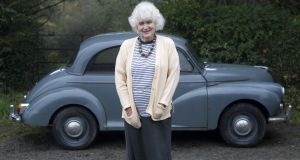 Jan Morris at her home near the village of Llanystumdwy in Gwynedd, north Wales. Photograph: Colin McPherson/Corbis via Getty Images

Every morning Jan Morris walks a brisk one thousand paces composing idle thoughts in her head about what she will write in her diary. The exercise provides her with inspiration but the difficulty is that by the time she returns home it has gone completely out of her mind.

This second collection of miniatures (her first was published in 2018) comes at the age of 93 and deals with her “modest meditations” on topics ranging from bad language, racism, wine, music, regrets and kindness to her Welshness, or Cymreictod, and the British empire about which she wrote an outstanding trilogy Pax Britannica (1968-78).

Through 130 daily entries, stretching from 2018 to early 2019, Morris has put her nonagenarian life and house on the Llyn peninsula in north-west Wales on display. She does not attempt to hide anything and her observations are written in a chatty style. Her house, Trefan Morys, she believes is past its best. “It really is an awful mess now – nightmarishly cluttered, run down, undusted, with miscellaneous chipped ornaments, unexplained bits and pieces, half-forgotten mementos, indecipherable scripts and lamps that don’t work all over the place … and the whole constituting all in all, I suspect, a passable forecast of Chaos”.

The author of more than 50 books of travel, history, biography, autobiography, fiction and essays (her first was published 64 years ago in 1956), Morris, as James, was a former foreign correspondent with the Times and the Guardian in the 1950s and early ’60s, covering many of the leading stories of the day. She underwent a sex-change in 1972, and still retains a curiosity about the “muddled mayhem” of the 21st century, offering opinions on Donald Trump, Brexit and the British royal family saga over Harry and Meghan.

She finds Trump’s personal ideals “almost grotesquely crude” but prefers his style of politics, although she remains ambivalent about his presidency. “He states his political case, whatever it is, boldly and unpretentiously to his own particular audience, and to hell with everyone else. It is an All-American way: America First! Make America Great Again! As one with a sneaking sympathy for patriotism, whatever flag it flies, I respond to this approach as instinctively as any redneck bigot.”

Like him or loathe him, she finds that: “He is like some baffling missile from outer space, sweeping in and out of our terrestrial atmosphere and leaving chunks of radioactive substances lying around.” Morris dislikes Trump’s attitude to women and decides that she can hardly think of him a great statesman but feels history may remember him as “Trump the Redeemed”.

While her views are thought-provoking and provide a social snapshot, they present a problem as the world has moved on and news events have overtaken her writing: Trump has since been impeached, Brexit has finally happened and Harry and Meghan have fled to Canada.

Parts of the book are tinged with sadness. The most moving passages are about her once wife and now civil partner Elizabeth (they married in 1949), who has dementia. Morris describes how the illness affects their daily lives, writing that Elizabeth now half lives in the “separate cursed dominion of dementia” and when she remarked to her about the complexities of Brexit, she cheerfully said she had never heard of it. She feels that a strange curtain has fallen between them and their long relationship is ruptured.

“In moments of exasperation, when Elizabeth’s behaviour can be most unconsciously irritating, I can be unforgivably cruel. I use words and phrases I despise, adopt rude attitudes that are not my own and think things I am ashamed to remember.”

By her own admission she has led a life of “variety, surprise and sexually complex, sustained by a lifelong love of a partner”, but now feels that she is well past her sell-by date. Her advice to readers is simple: “Never get old”. Many of these pieces are trivial, some fall flat while others have a spark. At one point she is moved to state: “I have been disgracefully self-centred all my life”.

Thinking Again is a reflective collection but its underlying tone is melancholy with a sense of self-aggrandisement. Morris is left pondering if life is worth living, saying, “I am getting rather tired of me”. She writes of a sense of impending closure drifting through her house and feels she has “outlived her usefulness”. A weary resignation with the world persists in her musings, at odds with a writer who lived a restless and swashbuckling life.

There are flashes of vivacity – she enjoys the power of certain words and can still turn an evocative phrase. An acerbic wit and gentle playfulness is apparent in some entries, and although many are insignificant, she is surely to be applauded for her indomitable spirit, battling on in the writing business in her tenth decade, reflecting life’s twists and turns when younger scribes would have called it a day.

Her travelling may be over, but apart from her daily constitutional on her lane in Llanystumdwy she delights in walking along the seafront in Criccieth, drinking coffee, meeting locals and finding all sorts of thoughts running through her head. Everything about old age, she states, is grist to a writer’s mill. She calls her diary jottings “inconsequential little pieces”. Some of her admirers may feel that less is more and perhaps she is guilty of over-thinking. But her unadorned book dedication, penned as though signing off an email or letter, benignly states, “With Kind Regards to Everyone”.