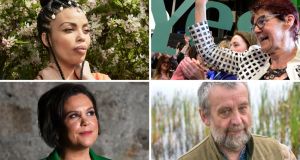 Tara Flynn, Emma Dabiri, Ailbhe Smyth, Mary Lou McDonald, Angela Nagle, Michael Harding and Ivor Browne are all in the spoken-word line-up at this year’s Body & Soul, the music and arts festival at Ballinlough Castle, in Co Westmeath, on the weekend of June 21st-23rd.

The Irish Times takes over Body & Soul’s Woodlands stage on Saturday, June 22nd. Jess Murphy, the Irish Times food writer and chef-patron of the Galway restaurant Kai; Sorcha Hamilton, who writes Beerista; and the cookery author and entrepreneur Rozanna Purcell join Catherine Cleary, Irish Times restaurant critic and climate activist, to talk about the rise of veganism, sustainability and how food can change the world.

The writer and comedian Tara Flynn, the journalist (and former Sydney Rose) Brianna Parkins and the spoken-word artist Felispeaks talk about the techniques and rituals they’ve used to help them navigate challenging times in their lives, and how to stay sane in a world gone mad, in a live recording of the Women’s Podcast.

And in a live recording of the Inside Politics podcast, Hugh Linehan will ask Mary Lou McDonald, the leader of Sinn Féin, Simon Carswell, The Irish Times’s Public Affairs Editor, and Sophie Long, the unionist activist, about the possibility of a united Ireland – and the latest on Brexit.

Hugh Linehan will also be talking to Ailbhe Smyth – one of Time Magazine’s 100 Most Influential People 2019 for her work on the Together for Yes pro-choice campaign – about a lifetime of activism.

On Sunday, the programme features Flynn’s podcast Taranoia, with Emma Dabiri as her guest; and Sentimental Garbage, hosted by Caroline O’Donoghue, whose guest will be her fellow writer Sarah Maria Griffin. The comedian Kevin McGahern meets the people behind the Waterford Whispers News website, and the historian Donal Fallon looks at the books censored in Ireland in the not-too-distant past with the writer and journalist Angela Nagle.

In the Sanctuary area, the playwright and Irish Times writer Michael Harding will talk about ritual, religion, his ongoing search for meaning, the narratives we weave around the self and the ultimate bliss of living in the present. And the emeritus professor of psychiatry Ivor Browne will suggest that the heart, rather than the brain, is the centre of our being, in conversation with the radio presenter and film-maker Donal Dineen.