In praise of older books: Good Behaviour by Molly Keane (1991)

Week 32: Julie Parsons on a year’s worth of her favourite books 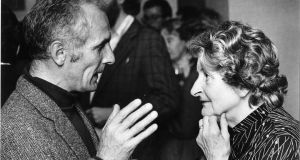 Let no one suggest that Good Behaviour by Molly Keane is funny. It is savage, cruel, scalpel-precise. Every blow is aimed with precision. Every put-down eviscerates. Every dismissal destroys.

Aroon St Charles, too tall, too plain, too ungainly, is the only daughter of Mummie and Papa, of Temple Alice, a once grand, now decrepit, country house. The book spans pre- and post-independent Ireland. The St Charles family, Anglo-Irish to their core, are hanging on. Just about.

Good behaviour is the ideal. No matter what indignity, good behaviour must be maintained. Aroon blunders through her teenage years. She wants desperately to be loved. But Mummie is indifferent to all but Hubert, their beloved son. And Papa has his “his endless strayings with all the other women who longed after him”. Poor, plump, sweet, Mrs Brock, the children’s governess. Papa’s rejection cut deep. “It was some time before they found her body, swollen almost to bursting the frilled bathing costume.”

Aroon falls for Richard, Hubert’s friend. He charms her, almost courts her. She is ecstatic. She visits his room. “Hubert was sitting on the edge of the bed. . . he stretched out a bare arm for Richard’s cigarette case. Neither of them offered one to me.”

Debts gobble up the family’s meagre resources. Bills, “pushed into the drawer where they always went”. How to manage the land, the horses, the farm, the servants? Ah yes the servants. Rose, their devoted cook, party to their secrets, treated with contemptuous intimacy. As Papa, one-legged after the first World War, lies dying, it is Rose’s hand, under the bedclothes, which comforts him, as Aroon thinks, “warming his foot – his phantom foot that felt the cold”.

Aroon is Keane’s masterpiece. She tells the story with a bumbling ferocity. She reminds me of The Butcher Boy’s Francie Brady. The same deluded self-belief, the same pathetic helplessness. And yet Aroon, unlike Francie, triumphs. “We kept our heads above the morass, stifled screaming despairs only by the exercise of good behaviour.”