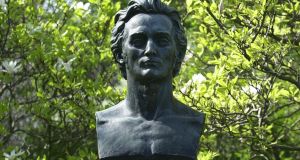 Each and every day for more than three years now, I have been posting a few lines of Irish poetry on my Twitter account, @DanMulhall. During that time, I have featured a great many of our poets from the 18th century to the present day.

A little while ago, I decided to tweet something from James Clarence Mangan. He is best-known for his association with the romantic nationalism of the Young Ireland movement and for such lines as:

O, my dark Rosaleen,
Do not sigh, do not weep!
The priests are on the ocean green,
They march along the deep”.

Born in Dublin in 1803, Mangan was a prolific writer, much of whose work took the form of loose poetic translations, mainly from German which he understood, but also from such languages as Arabic, Turkish, Persian and Chinese, which he did not.

Mangan’s work also includes quite a number of poems “from the Irish”, one of which, Prince Aldfrid’s Itinerary through Ireland, provided me with some tweetable lines. In Mangan’s version, these lines appear in the poem:

I found in Inisfail the fair,
In Ireland, while in exile there,
Women of worth, both grave and gay men,
Many clerics and many laymen.

I found in Connaught the just, redundance
Of riches, milk in lavish abundance;
Hospitality, vigour, fame,
In Cruachan’s land of heroic name.

Those lines reminded me of a passage of prose I had read many times over the years. It comes from the Cyclops episode of Ulysses:

“In Inisfail the fair there lies a land, the land of holy Michan. … And heroes voyage from afar to woo them, from Elbana to Slievemargy, the peerless princes of unfettered Munster and of Connacht the just and of smooth sleek Leinster and of Cruachan’s land and of Armagh the splendid and of the noble district of Boyle, princes, the sons of kings.”

This is among my favourite excerpts from Joyce’s modernist epic, and one that has become a staple of mine at Bloomsday readings I have organised this past 20 years in Edinburgh, Kuala Lumpur, Berlin, London and Washington. I love the comic absurdity of Joyce’s writing and the rhapsodic élan with which he lampoons what he thought of as the one-eyed nationalism of that era, and not just in Ireland of course as Joyce wrote during an era of super-charged nationalism during and immediately after the first World War.

The similarities between Mangan’s verse and Joyce’s prose are remarkable and could certainly not be coincidental. Joyce echoes Mangan when he refers to “Connacht the just”, “Armagh the splendid”, “Munster unfettered”, “Cruachan’s land”, “smooth sleek Leinster”, “Slievemargy” (in Co Carlow) and “the noble district of Boyle”. The magpie in Joyce clearly plucked elements from Mangan’s obscure poem when he sat down to compose that portion of Ulysses. It is normal to see Joyce as a writer steeped in the canon of European literature. These borrowings from Mangan show that he was also prepared to mine the Irish literary tradition for all it was worth.

Joyce wrote about Mangan in an undergraduate essay in which he described him as a poet with whom “a narrow and hysterical nationality receives a last justification”. One of the reasons Joyce left Ireland was to escape what he saw as the nightmare of history and, as he put it in A Portrait, to fly by the “nets” of “nationality, language, religion” that had been flung at his soul “to hold it back from flight”. He was conscious of a rising tide of nationalism in the early years of the 20th century and took aim at it in the raucous scenes he set in Barney Kiernan’s pub in Little Britain Street. The Cyclops episode can be read as an appeal for more pluralist nationalism, one that could encompass Leopold Bloom with his Hungarian, Jewish background: “What is your nation if I may ask, says the citizen. Ireland, says Bloom. I was born here. Ireland.”

Joyce knew of Mangan’s reputation for having lived a dissolute life mired in poverty and addiction, but felt that his sufferings had “cast him inwards, where for many ages the sad and the wise have elected to be.” It is as if Joyce was sympathising with a fellow traveller on the hard road to artistic integrity, misunderstood and undervalued by the society in which he lived. He may also have felt a kinship with Mangan on account of a shared experience of having reckless fathers who presided over the economic decline of their respective families.

Mangan died in poverty in Dublin during an outbreak of cholera in 1849, but his reputation survived and a memorial to him stands today in St Stephen’s Green not far from a bust of James Joyce. In his poem To Ireland in the Coming Times, Yeats named Mangan alongside Thomas Davis and Samuel Ferguson as poets who “sang, to sweeten Ireland’s wrong”. In an 1895 essay, Yeats described Mangan as “that strange visionary, ruined by drink and narcotics, who wrought some half-dozen lyrics of indescribable, vehement beauty”.

I doubt that Prince Aldfrid’s Itinerary through Ireland was among the works Yeats had in mind when he praised Mangan, but it did serve its purpose in Irish literary history by triggering James Joyce’s hyperbolic paean of praise to “Inisfail the fair”.
Daniel Mulhall is Ireland’s Ambassador to Washington DC