How Growth Really Happens: Reflecting on the making of economic miracles 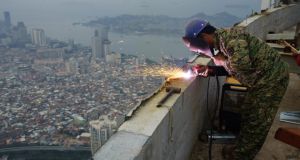 A worker on a skyscraper in Xiamen, China: the “Capability Triad” is a sweet spot of economic progress where skill development, the improved production of goods and organisational change overlap. Photograph: Reuters

A book that stretches from entrepreneurship in biotechnology in Massachusetts to engineering companies in Monaghan indicates a rare breadth of economic analysis. Analysis of both Irish success in medical devices and the birth of the American aviation and aerospace industry shows a notable depth of reflection on the causes of business growth.

This variety originates in the life and career of the author. His father was a trade union official and the opening lines of this book tell of an American childhood where “the workings, precision, and the noises of the machines, the tell-tale smells of the lubricants, and the pride, humour, and camaraderie of the men were imprinted in my mind”.

These experiences led to a career as an academic and consultant in industrial production and the causes of economic growth. An unusual and welcome focus on the detail of policy permeates this book, and references a stint working for the Greater London Enterprise Board, the German vocational educational system and the 2013 Irish Action Plan for Jobs.

Best wants to explain what causes economic growth “miracles” with the intention of bringing “several such purported miracles back to earth”.

Despite ample experience in the “real world” life of factory floors and widget-making chains, the writing style is heavily academic. Concepts such as the “application of the flow principle to victory program macroeconomic planning” and the lure of bringing “systems integration into the transformational framework” abound and, at times, numbed this reader.

But perseverance is needed and rewarded. A rich variety of economies are examined, beginning with an analysis of American engineering industries during the second World War and spanning to the performance of Italy, Germany, Japan and Ireland.

The chapter on Boston’s extraordinary economic success is the clearest exposition of the author’s insights on the causes of growth. The Boston Planning and Development Agency has recently measured their local economy at an extraordinary $119 billion.

The spectrum of links between the establishment of the Massachusetts Institute of Technology (MIT), investment in infrastructure, State government and entrepreneurship are thoroughly explored.

This nexus is described as the “Capability Triad” where a sweet spot of economic development can be achieved where skill development, the improved production of goods and organisational change overlap.

How can this overlap be achieved? The initial answer that “they are indirectly mediated by infrastructural institutions in successful transformative experiences” sheds little light.

Successive chapters argue that “government may be the only institution that can coordinate and orchestrate change cutting across the three domains”.

An abundance of case studies support the Triad thesis. German policies supporting research and development, the direct financing of industrial facilities by the American Government and the early phases of the development of Toyota are just some of these examples.

This framework is used to explain Irish economic development, while contending that we have significant difficulties.

The author writes that “it would be hard to overstate the success” of attracting international investment. The role of the IDA in developing employment clusters in pharmaceuticals, medical devices and software is acknowledged.

However, Best concludes that we have a “dual economy structure”, consisting of large international companies and a separate domestic economic sector, with no positive relationship between the two.

Recent research from the Department of Finance has also pointed to the differences in productivity levels between global companies located in Ireland and smaller, more indigenous enterprises. How we can develop positive spillovers between both sectors will always be a challenge.

The argument is overstated. The success of companies such as Glanbia, CRH and Ryanair is not mentioned. The analysis of start-up businesses activity lacks nuance. For example, the most recent survey of Irish enterprise indicated that entrepreneurship was above the European average.

There is a wider difficulty in this analysis. The development of the global service economy, the digitisation of economic activity and the consequences of automation and robotics do not receive the analysis that they clearly merit. This exclusion is a serious gap in any analysis of how modern economies grow.

This is a consequence of the focus on manufacturing and production. The Triad, while a very insightful framework, also excludes factors such as stability in policy making and population growth. The question of why economies grow is too big a question to allow a narrow answer.

However, the sophisticated linkages that are at the centre of modern mixed economies are thoroughly explored. The State and the economy depend on each other. Neither can afford splendid isolation from the other. Both must work together to achieve that most precious elixir of modern societies – economic growth.