Peter Whelan: a man of many parts 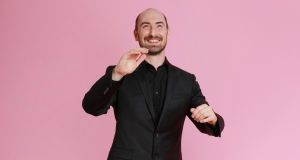 Peter Whelan: he wants to work on “music that I felt passionate about but that wouldn’t get done anywhere else”

The last time I interviewed Peter Whelan, in 2011, I carried out a background check in my listings files. I came up with a number of Peter Whelans who had been active in Dublin. There was a tenor, a piano accompanist, and another who wrote a work for wind ensemble.

They all turned out to be the same Peter Whelan, whose major profile seven years ago was as a bassoonist, although he was already directing his own Edinburgh-based Ensemble Marsyas from the keyboard.

The ensemble has gone from strength to strength, and its award-winning CD, Edinburgh 1742, which pairs works by Barsanti and Handel, last year reached second place in the Official UK Specialist Classical Chart.

Fast-forward to 2018, and Whelan is now the artistic director of the Irish Baroque Orchestra. He conducted Handel’s Acis and Galatea for the Opera Theatre Company last year, and he makes his conducting debut with the Irish National Opera in a new Patrick Mason production of Mozart’s Le nozze di Figaro in April.

He is one of the company’s first “artistic partners”, and will be working with them again for Emma Martin’s new production of Gluck’s Orfeo ed Euridice at the Galway International Arts Festival in July. His debut with the English Touring Opera will follow in the autumn.

It’s fairly easy to see how a keyboard-playing bassoonist would end up directing from the keyboard with an ensemble he himself founded. It’s a lot less clear how you get from there to being a conductor who stands in front of orchestras and waves his hands. So how did it all come about?

“I don’t know is the answer,” he says. “When I started Marsyas it was to do my own thing. I’d been working in orchestras for years and years and taking direction. The system is kind of us and them. I thought to break away and just do what I wanted to do. That’s how Marsyas started, with me, of course, playing the bassoon.”

He wanted to work on “music that I felt passionate about but that wouldn’t get done anywhere else”. The search for repertoire for Marsyas led him to Dublin, initially for bassoon music from 18th century Dublin, and on his Proud Bassoon CD of 2014 he recorded Matthew Dubourg’s Eileen Aroon with variations. But that was only a start. He “began to dream about what more was possible”, and the project became much bigger than just the bassoon.

He was, he explains, a keyboard player before he was a bassoon player, and his interest in the bassoon came partly from wanting to play with other people rather than just on his own.

In the world of baroque music he says “both keyboard and bassoon are bass-line instruments” – keyboard parts are usually just a bass line with a numeric code for the harmony which the players improvise in performance – “and the feeling isn’t that different between the two. Once you understand how music groups work, together with the breathing of the bassoon, and how you lead and how you sing... breathing and singing for violins and voices doesn’t seem all that different.”

He comes back again and again to the idea of shaping the bass line. Ultimately, he says, “you just say we’re going to go this way. If you convince the players to come with you and allow them their freedom around that then everything will hang together.” The way he describes it makes it sound collaborative rather than directed. But he knows it’s not that simple.

“Of course what tends to happen, and I know it from both sides, is that the hand starts to come up” – he mimics a hand at a keyboard rising up into the air and start making conductor-like gestures.

“Once the hand comes up it galvanizes people more. You can do much more. You suddenly realise that if you want a big pianissimo, you can do that” – he makes another gesture. “And, of course, with great power comes great responsibility. Then you’re conducting. Your hands are moving around.”

Given his experience as an orchestral player he is still very wary of the power conductors have. He doesn’t want to inhibit anybody.

“So many conductors are just concerned with controlling and micro-managing. I think that turns musicians’ creativity off. At least it does for me when I’m sitting in the orchestra, and I get very frustrated. If the players feel that they are free to play, then that’s half the battle.”

I ask if the micro-managing conductors he has in mind are the old-style martinets? “It’s not so much the old-style actually, it’s more the young generation of conductors. The ones you come across from the big, big agencies. The old style are often more respectful because they’re coming from a tradition where they’ve been répétiteurs, or they’ve worked in the opera, or they’ve played in string quartets. They don’t care how they look, for instance. They’re the best ones to work with.

“It’s the people who can only have been practising in front of a mirror aged 18 to 20, they can’t have had orchestral experience. They look wonderful. They do a great flick of the hair and they love enormous crescendos. The older ones know how to let you play, they know when to take control and when to let go. [Simon] Rattle is a great example of that. He’s always adjusting as the concert goes on, and responding to what he hears.”

When it comes to Whelan’s new role with the Irish Baroque Orchestra, he’s keen to continue the exploration of the musical heritage of Dublin. He has been researching the work of the Irish State Musick, the official band of Dublin Castle, and gave concerts in the castle itself last August, as well as at Kilkenny Arts Festival.

“I want everything that the Irish Baroque Orchestra does to have some link to Ireland,” he says, pointing out that the important musical cultures of the 18th century were reflected in Ireland at that time. “It was a very cosmopolitan time. It gives us a space to explore ourselves and in a European context as well. There’s so much to do on those lines.”

His first programme, at St Ann’s Church in Dublin on Saturday, February 24th, will focus on “Dublin’s Virtuosi”: Francesco Geminiani, the Italian composer, violinist and theorist who worked in Dublin and died there in 1762, Matthew Dubourg, and the Dublin violinist Jacky Clegg, who was a leading player in London in the 1730s. And Dubourg, who played a leading role in Dublin’s musical life over three decades, will be featured on a CD for Linn Records to be recorded in August.

“We have a tradition in Western art music, classical music, things we didn’t know about, it’s not necessarily an alien thing. Of course, the system was different back then, and there are lots of things not to like about it – how Ireland was at that point very divided. The musicians’ world was a slightly more liberal place, and there were important musicians living in Ireland and working for Irish audiences.

“I want to increase that footprint for today’s listeners. There seems to be a hunger for it abroad too. If you go to France or Germany or Britain it’s been done to death. Everybody knows exactly what happened in the baroque times. It hasn’t been explored here yet. We have a unique story to tell.”

Sex, swearing and flushing the loo: How these films broke big-screen taboos
7