‘If it’s me and your granny on bongos, it’s the Fall,’ irascible singer once proclaimed

A collection of some of the hits from Mark E Smith's prolific band, The Fall. 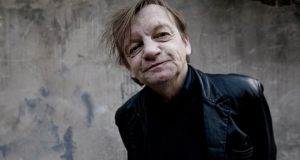 Mark E Smith, the irascible frontman of Manchester post-punk band The Fall, has died at the age of 60.

Pamela Vander, Smith’s partner and manager of the band, said in a statement: “It is with deep regret that we announce the passing of Mark E Smith. He passed this morning at home. “A more detailed statement will follow in the next few days. In the meantime, Pam & Mark’s family request privacy at this sad time.”

News of his death was reported on The Fall’s Twitter page and on the website of the band’s record label, Cherry Red Records.

Smith formed The Fall in 1976 in Prestwich and was the only constant member of the band. He was known for his tempestuous relationship with his bandmates, and frequently fired them – there have been 66 different members over the years, with a third of them lasting less than a year.

The day I've been dreading.

"It is with deep regret that we announce the passing of Mark E. Smith. He passed this morning at home.... 1/2

“If it’s me and your granny on bongos, it’s the Fall,” he once proclaimed. “They are always different, they are always the same,” BBC DJ John Peel famously said of The Fall, whom he called his favourite group, dubbing them The Mighty Fall.

Smith was a famously prolific musician. This year The Fall released their 32nd studio album, New Facts Emerge, and had been fitfully touring in recent months when Smith’s health would allow. The band played London’s 100 Club in July, while Smith performed from a wheelchair in Wakefield in October.

In August, the band cancelled shows in New York and Louisville, Kentucky, after Smith was hospitalised for issues relating to his throat, mouth and respiratory system. At the time Vander issued a statement saying: “Unfortunately, it would be a gamble on his health to fly anywhere over the next couple of months.”

It would have been The Fall’s first US dates in a decade. In late December further US dates were cancelled, with Vander citing “a full year of bad health” as the reason.

Smith was born in Salford in 1957, and formed The Fall with friends Martin Bramah and Tony Friel as a teenager. The band’s output included 11 top 40 albums, including 1993’s The Infotainment Scan, which reached No 9. Smith has also collaborated with artists including Gorillaz, Inspiral Carpets and Elastica. His autobiography, Renegade: The Lives and Tales of Mark E Smith, was published in 2008.

In 1983, Smith married Fall member Brix Smith Start; they divorced in 1989. He subsequently married Saffron Prior, who ran The Fall’s fan club. He has been married to his current wife, Eleni Poulou – who was a member of The Fall between 2002 and 2016 – since 2001.

His death was previously wrongly announced by the BBC in March this year, on his 60th birthday. – PA, Guardian Service, Agencies