Brother in Ice by Alicia Kopf review: Polar expedition journeys to centre of the self 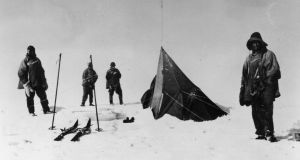 This extraordinary debut by a Catalan multimedia artist, summoning an alias which will be explained, looks to the facts of polar expedition and the men who risked everything. National pride was at stake. Of course, they were searching for answers about the seductive wastelands at the top and the bottom of the world. Their methodology differed starkly; Roald Amundsen, the pragmatic Norwegian, ate many of his original 100 Greenland sled dogs. He reached the South Pole first, on December 14th, 1911, pitching a tent from which flew his country’s flag.

More than a month later, in January 1912, the less well organised English romantic Robert Falcon Scott led his dejected team to the same spot where they stood gazing at the flag. Their Mongolian ponies had died one by one. Scott and his men would perish on the ice; Amundsen was never forgiven for surviving. But these quests were also personal; exploration is a type of justification. Ernest Shackleton had to devise another challenge.

The troubled young female narrator of Brother in Ice is an artist suspended between finding meaning in images and her interest in the idea of investigation. She is drawn to snow, ice and areas of white, and wonders about it: “I often find myself getting stuck in this project. I see nothing before me, just white. Yet beneath it there are many things. The shrieking of seals. Was it the poles I wanted to talk about? Or is it just the image of the snow that fascinates me? Instability, confusion, cold (it’s hot), determination. Sensations that were the constant companions of the polar explorers in and of themselves.”

For her the real fascination “is the possibility of an epic, a new epic, without foes or enemies; an epic involving oneself and an idea”.

Facts come fast and eloquently presented in a controlled torrent – only 11 of Amundsen’s dogs lived and were promptly given to another expedition team. Alicia Kopf is engaged, gathering material in a series of research notes. Alongside the information is the narrator’s story as the younger sister of an autistic brother. He is nearing 40 and remains trapped in an ice world. “He’s simply passive: when he’s hungry he doesn’t go to the fridge, and when he’s tired he doesn’t go to bed . . . So, from when he gets up until when he goes to sleep, he has to be told to do every action, or it has to be done for him. We don’t know what is going on inside of him.”

The daily life described consists of insecure bouts of employment and ongoing relationship problems; friends appear and offer companionship when they can during interludes in their own lives. The edgy, likeable and, at times, perplexed narrator wonders at her personal confusion. It should seem self-absorbed but it is not. It is often funny, such as when she is participating in a conference on contemporary art and her thoughts wash up on memories of an old boyfriend. He is the one she can’t forget, and she muses: “During the boring parts of conferences and colloquiums, I think about sex. I wonder if the other attendees are doing the same.”

Elsewhere she ponders as to why objects once given and received as signs of love endure after the emotions they once represented are gone.

Her parents are divorced and this event, which devastated her childhood, which was already strained and found wanting due to the attention lavished on her brother, has left her seething with resentments which have shaped her personality. She adores her father, a genial Peter Pan of sorts, causing her unreliable mother, hardworking and distracted, to be always blamed – for everything. Outraged over having to repeatedly ask to be driven to Ikea, the narrator launches a verbal attack to which the mother responds as if easing a toddler.

It is hilarious and yet further evidence of the superb job translator Mara Faye Lethem has done in capturing and sustaining the cadences of tone as the narrator’s thoughts move from wry to reflective.

Kopf is the pseudonym of Catalan artist Imma Avalos Marques; her Alicia Kopf once featured as a headless girl in one of her installations. For “headless” read an individual searching of identity.

As the physical movement in which the writer engages brings her further north, she arrives in Iceland. She misses nothing and her interactions add further to the anecdotal appeal of her disarming delivery.

Is it a novel? Who cares? This is fast, fluid, exciting narrative; random, philosophical, alive, questioning, full of precise set pieces, sensations, regret, emotion, self-doubt, defiance, curiosity and a feel for history, fact and human behaviour.

Deservedly praised by a kindred spirit, the Spanish original Enrique Vila-Matas, Kopf, who defers to the wonderful Catalan Josep Pla, also has a great deal in common with Poland’s Olga Tokarczuk. Brother in Ice is a living book and one to give your most discerning friends: it is a gift rich in sympathy if devoid of sentiment. A book of the year? Looks very much like it.